Bleeding Indicators: Piercing the Fog of War in Iraq

V-22s shown aboard the USS Mesa Verde. The ship sailed into the Persian Gulf on Monday, where its tilt-rotor aircraft could used be used to rescue U.S. diplomats in extremis in Baghdad.
MC2 Shannon M. Smith / Navy photo
By Mark Thompson

Peering through the fog of war, which is what happens when two sides, more or less organized, begin firing at one another, is always a challenge. So like the beleaguered British in World War II, let’s use radar instead to try to figure out what’s happening as war revisits Iraq:

—Be leery of offers of Iranian help to the Iraqi government of Prime Minister Nourti al-Malaki. Or, more critically, any statement that they’re not helping.

There have been unconfirmed reports of Iran’s Revolutionary Guards fighting in Iraq alongside the Shi’a-led government of Iraqi Prime Minister Nouri al-Maliki. But on Monday, Iranian President Hassan Rouhani denied them.

Why wouldn’t he deny them? Confirming them would only fuel what is beginning to look like a Shi’s-Sunni death match, and encourage the Sunni states, led by Saudi Arabia, to increase their own involvement in the fight. Better to send your troops in secretly and make it appear that Maliki’s Iraq forces are regaining the edge on their own, without encouraging wider Sunni involvement.

—In modern war, especially where one side is a non-state actor, watch out for exaggerated boasts of success. The ISIS “has resorted to spreading many rumors in its own favor and in order to stage a psychological war against the Iraqi government,” the Iranian state-controlled Fars News Service, which seems primed to rebut any ISIS claim, reported Monday, based on chats with friendly Iraqi generals.

Cable TV has been filled with videotaped executions purportedly conducted by the Islamic State of Iraq and Syria. Such actors—often terrorists—need to cast bigger shadows than reality, and such displays often fit the bill.

The good news, from the videographer’s side: it shows their ruthlessness, scaring the enemy while revolting much of the world.

The bad news: they ensure that the enemy will fight to the death rather than surrender.

—The U.S. embassy staff is shrinking. This is significant because it means the U.S. isn’t betting on Iraq’s U.S.-trained army to defend the U.S. embassy. Saturday’s Pentagon statement about ships moving into the Persian Gulf was all about offensive firepower atop the carrier USS George H.W. Bush, and the land-attack Tomahawk cruise missiles aboard the USS Philippine Sea and the guided-missile destroyer USS Truxtun.

Two days later, on Monday morning, the Pentagon entered a defensive crouch as it ordered the amphibious USS Mesa Verde into the gulf, as well, with 550 Marines aboard. Such a force can’t win a war, but it’s ideal to rescue U.S. diplomats from the grounds, or the roof, of a besieged U.S. embassy with the help of its V-22 tilt-rotor aircraft.

In the second defensive move of the day, on Monday evening the White House announced the President has informed Congress “that up to approximately 275 U.S. military personnel are deploying to Iraq to provide support and security for U.S. personnel and the U.S. Embassy in Baghdad.”

—A voice from the past sounds off. “Those Americans who have pressed in the past for dividing Iraq should be careful: They might get what they wished for. The price would be very high: a regional war on top of an Iraqi civil war. American action now would be considerably less difficult than later,” L. Paul Bremer, U.S. presidential envoy to Iraq in 2003-04, wrote in Monday’s Wall Street Journal. “It is time for both American political parties to cease their ritualistic incantations of `no boots on the ground,’ which is not the same as `no combat forces.’ Of course Americans are reluctant to re-engage in Iraq. Yet it is President Obama’s unhappy duty to educate them about the risks to our interests posed by the unfolding drama in Iraq.”

It is time for both American political parties to cease their ritualistic incantations of “no boots on the ground,” which is not the same as “no combat forces.”

Imagine that: war on the cheap. 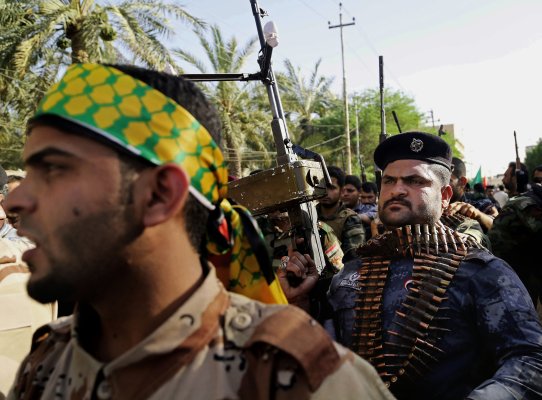 Iranian Intervention in Iraq Would Be Risky
Next Up: Editor's Pick