The aircraft aboard the USS George W. Bush are now within striking distance of Iraq.
BORIS HORVA / AFP / Getty Images
By Mark Thompson

If the U.S. military attacks targets in Iraq, it’ll be a long way from the “shock and awe” bombing campaign that opened the 2003 war. Think of it more like a delicate smattering of smaller bombs and missiles designed to pick off elements of the Islamic State of Iraq and Syria as they try to consolidate the gains they have made over the past week against the Iraqi government of Nouri al-Maliki.

“We need air power immediately to stop the advance toward Baghdad,” Senator Lindsey Graham, R-S.C., told CBS Sunday. “The seeds of 9/11s are being planted all over Iraq and Syria.”

Air strikes are on the list, Pentagon officials say, including F-18 bombing runs from the USS George W. Bush, which moved into the Persian Gulf over the weekend. “There are an awful lot of movements that they are making that are targetable,” Anthony Cordesman, of the Center for Strategic and International Studies, says of ISIS’s movements. “They have to be able to move between cities to expand, they have to have supply lines. We don’t have to conduct urban bombing to deal with the expansion of this movement.” But the lack of a target-rich environment means any military action will be limited.

Attacks from unmanned aircraft offer the safest option for the U.S. because no pilots could be shot down and captured. But manned land-based aircraft pack a bigger punch, and carrier-based air disposes with the need to get someone’s permission to park your warplanes on their runway.

Ideally, you’d want to base your aircraft as close to your targets as possible, to maximize the number of sorties each plane could fly, instead of spending hours en route to the targets. The U.S. may press Maliki for permission to base U.S. aircraft inside Iraq, if the White House agrees that doesn’t violate President Obama’s bar on putting combat troops inside the country. They also could be based in the Kurdish north of the country, or in neighboring nations.

But missiles without good intelligence to guide them to the right targets are simply indiscriminate IEDs that could kill friendly forces, or even civilians. That’s why some military experts argue there need to be U.S., or at least allied, spotters on the ground—no one is willing to trust targets selected by Maliki’s military—to ensure destruction happens in the right place. “You could put [U.S.] Special Forces on the ground with the Iraqis to advise them and get frontline intelligence and to control air strikes,” says Anthony Zinni, a retired four-star Marine general who served as chief of U.S. Central Command. But that, too, could run afoul of Obama’s bar on U.S. troops on the ground inside Iraq.

MQ-1 Predators, outfitted with AGM-114 Hellfire missiles, are well-equipped to take out moving targets. MQ-9 Reapers, in addition to Hellfires, also can carry precision-guided 500-pound bombs, which could take out ISIS camps and depots.

Basing U.S. warplanes in the region shouldn’t be a problem if Iraq’s neighbors get nervous enough. “Potentially, the gulf will see enough of a threat so that it isn’t even a matter of having to base air power in Iraq,” Cordesman says. “You could conduct air strikes out of bases in Kuwait or Qatar.”

Strikes also could be launched from the carrier, which arrived in the gulf along with the guided-missile cruiser USS Philippine Sea, the guided-missile destroyer USS Truxtun, and the USS USS Mesa Verde, an amphibious vessel carrying 550 Marines.

Stephen Biddle, a military analyst with the Council on Foreign Relations, doesn’t think air strikes will accomplish much. “We had a lot of troops on the ground in 2006 and we weren’t able to bring this thing to a finale,” Biddle says. “Now we think we’re going to do it with airstrikes alone? Very unlikely.”

Unmanned and unarmed RQ-4 Global Hawk drones have been tracking ISIS moves in Iraq in recent weeks. “We’ve been watching events in Iraq for some time and watching ISIL’s movements and developments, capabilities,” Rear Admiral John Kirby, the Pentagon spokesman, said. “Clearly, they’re well-resourced. And what we’re seeing is a not unsophisticated, you know, degree of cooperation and organization on their part, and of course, momentum.”

Pentagon officials speak of the need to “break” ISIS’s “momentum,” but concede it’s a tough challenge. Despite the intelligence streaming from the Global Hawks, the U.S. was still stunned by ISIS’s rapid progress. That suggests, they say, that ISIS’s successes are due more to the Iraqi army’s ineptitude and lack of will to fight than ISIS’s martial prowess.

“I’m not going to be cute about it,” Kirby said. “We’re certainly disappointed by the performance of some Iraqi force units with respect to the challenges that they have faced in the last few days.” But, in what is becoming the Administration’s mantra, he added: “When we left Iraq, we left with Iraqi security forces that were competent to the threat that they were facing,” Kirby said, acknowledging “that threat has evolved over three years.”

“I think Baghdad is vulnerable, Rep. Mike Rogers, R-Mich., chairman of the House Intelligence Committee, said on Fox Sunday. “It appears that they’ve halted their attack on Baghdad and now are trying — they being ISIS — now are trying to consolidate their wins in Mosul and Tikrit and other places, build in their defenses.”

If the ISIS pushes threatens Baghdad, the U.S. might have to join with Iran in an alliance to defend the Iraqi capital, Lindsey said. “We’re going to probably need their help to hold Baghdad,” he said. “In the short term, why did we deal with Stalin? Because he was not as bad as Hitler in our eyes.”

But if ISIS decides it is satisfied with half a loaf, it could set up an enclave straddling Syria and Iraq. How long the U.S. and other nations could allow such a sore to fester isn’t known. But they’d have to act to take it out before it becomes infected. 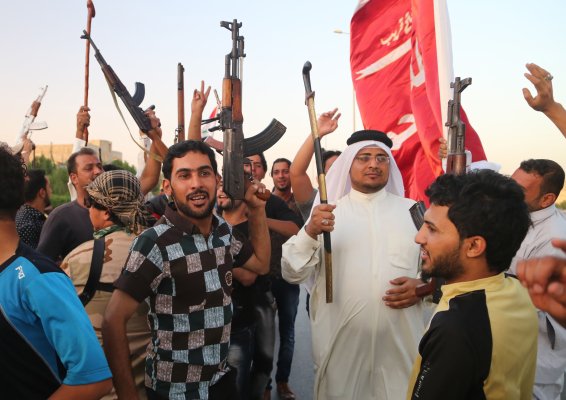 What You Should Know About What's Happening in Iraq
Next Up: Editor's Pick