In early 2012, Rep. Raul Labrador’s office got a call from Mitt Romney, then the GOP presumptive nominee. The Idaho Republican, a Mormon, has several staffers who are also members of the Church of Latter Day Saints, the same church as Romney. The young staff assistant who answered the phone was flabbergasted to be speaking to one of the church’s rock stars. He could barely get the words “Mitt Romney” out of his mouth. Labrador took the phone and when Romney—whose nomination was by then a foregone conclusion for 99% of the party—asked him for his endorsement, Labrador demurred.

For the next 15 minutes, the then freshman House member proceeded to interview the party’s soon-to-be standard-bearer, not only on issues but also on campaign strategy. Labrador ended the call without committing his support. When his surprised staff asked him if he intended to vote for Romney he replied, “I will likely support him, but I will not let him take me for granted. He will still have to earn my support.”

Labrador did eventually back Romney but his private gripes about Romney’s strategy burst into the spotlight days after Romney lost the election. Labrador publicly took the governor to task for his handling of the campaign, particularly his “self deportation” policy. Labrador urged a centrist route on immigration reform.

To say that Labrador has made a career of challenging the establishment is an understatement. At every turn in his short political career, he has zigged when everyone told him to zag. He has taken on fellow Republican Idaho Gov. Butch Otter, won impossible races against establishment candidates and reportedly even tried to oust House Speaker John Boehner in January 2013. Yet again his party establishment is calling him foolhardy and a long shot for challenging Whip Kevin McCarthy for Majority Leader this week in a race to replace Eric Cantor, but none of this bothers Labrador. After all, Cantor was unseated in a shocking primary election by the same forces that Labrador is so good at harnessing: the restless Tea Party right who’ve been demanding a seat at the table for years.

“Raul has the most uncanny natural ability to see how things will play out several steps down the road,” says John Goodwin, his former chief of staff and now vice president at The Herald Group in Washington. “He is borderline prescient. I cannot count all the times I didn’t believe things he predicted only to watch them come to be, and all I could do was shake my head.”

Labrador enjoys the support of Tea Party groups—even before he officially announced his candidacy on Friday, the Campaign for Liberty sent out a press release endorsing him. And the National Taxpayers Union gave Labrador the best rating for protecting taxpayers, 90% to McCarthy’s 79%. McCarthy has claimed to allies that he has the votes locked down, but the 170-member conservative Republican Study Committee has been advocating for greater representation in leadership. And the ballot is secret, so no one will ever know for sure who the 240 GOP House members voted for. Many members, afraid of primary dethronings like Cantor’s, could vote for Labrador as a way of shoring up their conservative credentials.

“Rep. Eric Cantor’s historic loss on Tuesday should be a wake-up call to all elected officials that they ultimately work for the people,” said John Tate, president of Campaign for Liberty. “Apparently not enough House Republicans received that message on Tuesday, as reports indicate Republicans are considering replacing the status quo with more status quo. Instead of bringing a fresh voice to leadership, they’re sliding down the list to the next in line.”

Labrador is an unlikely conservative fire-breather. He was born in Puerto Rico and moved with his single mother to Las Vegas as a child. There the small family found Mormonism and converted. Labrador attended Brigham Young University, studying Spanish and philosophy, before earning a law degree from the University of Washington. He settled in Idaho, where he opened a private practice. In 2006, Labrador was elected to the State House, where he immediately took on Republican Gov. Butch Otter’s plan to raise gas taxes to pay for new roads. Labrador also helped pass legislation to restore gun rights to those declared mentally defective by the courts as well as a bill to exempt Idaho from Obamacare.

He made himself so unpopular with Idaho’s GOP leaders that none endorsed him when he entered the race in 2010 for Democratic Rep. Walt Winnick’s seat. The establishment favorite was Marine Maj. Vaughn Ward, whom everyone from Cantor and McCarthy to Sarah Palin supported. But thanks to Labrador’s doggedness and Ward’s missteps, Labrador won the primary in an upset, beating Ward 48% to 39%. Despite Winnick’s five-to-one money advantage, Labrador easily dispatched him that fall in a wave GOP election.

Within a month of arriving in Washington in January 2011, Labrador voted along with 45 other Tea Party members to get rid of the second engine for the F-35 fighter jet, a pet project of Boehner, as part of the engine is made in his district. Two years later, Labrador was one of a small group of disaffected conservatives who explored ousting Boehner, but found they didn’t have the votes. Instead, when it came time to vote for speaker, Labrador was one of dozen who voted “present” or for someone else instead of supporting Boehner.

Labrador has also been active in policy, working with the bipartisan Group of Eight in the House to find a solution on immigration reform. Labrador seemed to sense he was playing with fire, though, and eventually the talks collapsed late last year, after he walked away saying he couldn’t support the proposed compromise. He was an early supporter of a Balanced Budget Amendment, an idea adopted by Boehner as part of the 2011 debt ceiling negotiations. Though it passed the House, it failed in the Senate. And despite the fact that he supported a bill that would’ve cut funding to Idaho’s National Laboratory, Idahoans reelected Labrador with 63% of the vote in 2012.

Labrador in many ways embodies the dissatisfaction that led to Cantor’s surprised fall to Tea Party candidate David Brat last week. He also represents some of its disorganization: entering the race relatively late and with few whips to corral votes compared to McCarthy’s battalion of 30+ members making calls on his behalf. But what Labrador does have is popular support from a vocal segment of the base. And patience. Even if Labrador doesn’t win this time, rest assured he’ll try again at the next leadership elections in January. Like a dog with a bone, Labrador doesn’t easily let things go. 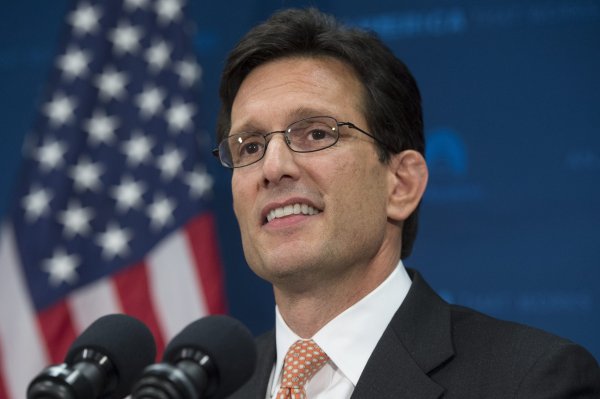 Eric Cantor Has 'No Regrets' After Stunning Loss
Next Up: Editor's Pick