I came home from Afghanistan in the spring of 2008, left the Army a couple months later, and started college in Alabama a couple months after that. College was going to be a safe place where I could reintegrate, focus on learning and get a degree that would help me support my family. I wouldn’t have to carry fellow students in flag-draped coffins, or worry about rocket propelled grenades flying over my head as I slept, both things that had happened in the previous year.

That illusion was shattered on February 12, 2010. That day, Amy Bishop, who had previously been investigated in multiple violent crimes, sat calmly through half a biology faculty meeting before standing up and shooting six of her colleagues, killing three.

Bishop opened fire as I sat in a club meeting in a nearby building. She was probably forced out of the room by the survivors as I left the building for my truck. I drove by the scene of the crime just as campus was locked down behind me and dozens of patrol cars zoomed towards Shelby Hall where shell casings littered the floor of a conference room.

School was no longer a safe place. It certainly wasn’t as dangerous as Afghanistan, but it was still clear that the utopia of safety I had imagined was a fantasy.

I was a gun owner then. I had multiple pistols of various calibers. I even owned the same model that George Zimmerman used to kill Trayvon Martin. I loved going to a local indoor range on Fridays after class and decompressing until the palm of my hand was bruised.

But as my own daughter grew to school age and campus shootings like the one I experienced mounted, I could no longer justify keeping them. Unceremoniously, I boxed them up, took them to a gun show, and sold them to the first person who offered me half of what I paid for them.

“Open carry” activists have dealt with gun violence differently. Rather than feeling, as the great majority of Americans do, that something must be done to limit access to firearms, they’ve chosen this moment to tote weapons that have no practical purpose beyond killing into retailers across the country, daring the establishments to turn them away. When I encounter their stories, I think of the two gun deaths that have occurred across from and in the street in front of my daughter’s school, just this year.

Many of these retailers decline to take a stance either way, claiming that they do not wish to involve themselves in “contentious political issues.” As we approach Father’s Day this weekend, when many of our families will purchase cards or take us to dinner at such “neutral” establishments, the indignant voice in my head tells me the worth of that excuse has long expired.

There was a time in America when companies made the same excuse when pressed on gay rights. But some time between then and when Bud Light made a logo that advocated for marriage equality and Oreo created rainbow cream, that ceased to be acceptable. As a country, we decided that businesses that discriminated against the LGBTQ community didn’t deserve our dollars.

One retailer certain to have a special interest in Father’s Day sales figures is Hallmark, a company that, according to the National Gun Victims Action Council, bans weapons in its corporate headquarters, yet doesn’t have the same policy for its Gold Crown Stores. This stance has lead NGVAC and other groups to call for a boycott against Hallmark this Father’s Day. And I think that coalition is onto something—I’ve requested that my family consider this when making shopping and dining pans for Sunday.

But this issue goes farther than taking the common-sense step of not letting people carry rifles while shopping for greeting cards. By attempting to stay above the fray, businesses like Hallmark are choosing—or being forced to choose, really, by the gun-toters—the side of irresponsibility. And to be irresponsible themselves. When children are being shot almost once a week in their schools, these companies need to look to Bud Light for some guiding principles.

It’s time for these companies to get in the game of making sure our kids are safe. I’d be ecstatic if this Father’s Day, people and corporations started doing more to make sure I get to keep being a dad.

Richard Allen Smith is a former Army sergeant. He served five years on active duty, including a deployment to Afghanistan with the 82nd Airborne Division from February of 2007 to April of 2008. Smith is currently a graduate student in writing at Johns Hopkins University. 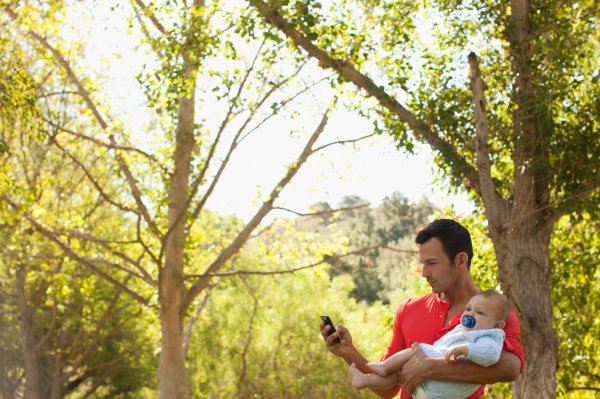 Do Fathers Love Their Children Less Than Mothers Do?
Next Up: Editor's Pick