Volunteers, who have joined the Iraqi Army to fight against predominantly Sunni militants from the radical Islamic State of Iraq and the Syria (ISIL), carry weapons during a parade in the streets in Al-Fdhiliya district, eastern Baghdad on June 15, 2014.
Thaier Al-Sdani—Reuters
By Massimo Calabresi

President Barack Obama declared last year that the war on terror, “like all wars, must end,” and as recently as two weeks ago, he seemed to be making progress. Outgoing Senate Armed Services chairman, Carl Levin, had charted a legal path for closing the U.S. military prison at Guantanamo Bay. The White House and Congress were negotiating a replacement for the broadly worded 2001 anti-al Qaeda Authorization for the Use of Military Force. And the President and his aides were talking about having all U.S. troops out of Afghanistan by 2016.

In a matter of days, the outlook has changed dramatically, nowhere more so than in Iraq where the al Qaeda-inspired Islamist group ISIS has burst from its stronghold in Anbar province to seize much of the north of the country. Less visibly, the Bergdahl affair has derailed Obama’s Gitmo closure plans as Republicans protest Obama’s release of five senior Taliban officials from the prison. And in Nigeria, Boko Haram’s kidnapping of 200 young girls drove Obama to deploy a U.S. special forces team to help in the hunt.

While the President may have felt a month ago that the end was in sight for many of the special powers America claimed at the start of the war on terror, now he finds a combination of events around the world and at home pushing him to embrace them anew.

The most urgent “war on terror” question for Obama is whether to use force against the advancing assault of ISIS in Iraq, and what authorities to tap if he does. On Friday, Obama declined to announce direct engagement in the unfolding chaos in Iraq, but said instead that he had “asked my national security team to prepare a range of other options that could help support Iraq’s security forces” and that he would be “reviewing those options in the days ahead.” Over the weekend, he moved the U.S. aircraft carrier USS George H. W. Bush to the Persian Gulf in preparation for possible airstrikes against ISIS’s forces.

If Obama does use force, he will be relying on two authorizations from Congress, both passed at the height of President George W. Bush’s expansion of Presidential powers in the so-called “Global War on Terror.” The first would be the October 2001 Authorization for Use of Military Force, which gave the president broad powers to attack al Qaeda and its allies anywhere around the world. Obama had been negotiating a more limited replacement for that law.

The other is the 2002 Authorization for Use of Military Force in Iraq, which gave Bush the authority to “defend the national security of the United States against the continuing threat posed by Iraq.” As Harvard’s Jack Goldsmith wrote Friday on Lawfare, “It is not at all hard to interpret this statute to authorize the President to use force today to defend U.S. national security from the threat posed by the [ISIS]-induced collapse of Iraq.” Either way, the use of force in Iraq would reinforce extraordinary powers in the war against terrorism, rather than diminish them.

Obama’s other major setback in his effort to end the war on terror came with the release of U.S. POW Bowe Bergdahl in exchange for five Taliban leaders held at Guantanamo Bay. Obama released the five men without providing the 30-day notice Congress insisted it be given before Gitmo prisoners were repatriated. In the outcry afterwards, Republican members of Congress made it clear they would block the increased authority Sen. Carl Levin had proposed Obama be given to transfer prisoners next year.

When the current crises abate, it may be possible for the president to resume conversations with Congress over how to adjust and perhaps curtail extraordinary post-9/11 powers. But for now, he and the country seem headed in the other direction. 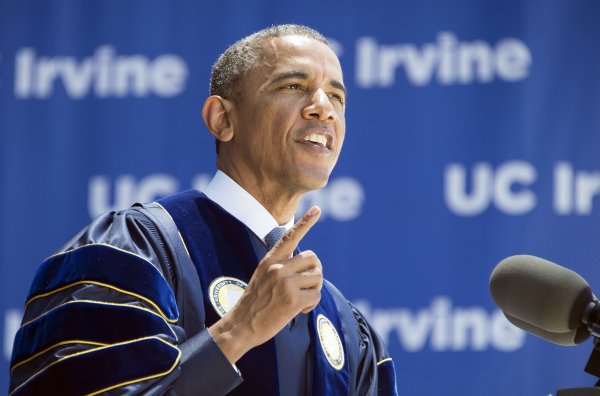 Obama Calls For Action on Climate Change
Next Up: Editor's Pick