Coup? What Coup? The Thai Junta Is Denying Everything

Thai army chief and junta head General Prayuth Chan-ocha smiles as he leave after the meeting of the 2015 national budget at the Army Club in Bangkok, June 13, 2014.
Narong Sangnak—EPA
By Charlie Campbell

Thailand’s ruling junta — yes, the same military regime that seized power by force of arms on May 22, ousting a civilian government and detaining senior politicians — is now saying that no coup took place.

“Don’t call it a coup. The military action this time is totally different from the previous successful coups since the 1932 takeover,” junta spokesman Col Werachon Sukondhapatipak told baffled reporters at the Foreign Correspondents’ Club of Thailand, according to the Bangkok Post.

Since seizing power, Thailand’s military has crushed all forms of dissent, imposed a nightly curfew and imposed severe curbs on civil liberties, and taken over all government departments.

That’s pretty coup-like. So are the junta’s ham-fisted attempts at buying off the masses. The military has launched a series of tawdry events designed to “Return Happiness to the People,” issued some fairly dreadful music, and unleashed a wave of populist policies. Among these are the screening on free TV of all World Cup matches, the wheel-clamping of hundreds of cars to unclog Bangkok’s chronically snarled streets, and the cancelation of free flights for executives for national carrier Thai Airways.

The regime has been trying its hand at serious policy decisions, too, scrapping a $24 billion high-speed rail scheme, championed by former Prime Minister Yingluck Shinawatra, that would have been a boon to her ardent supporters in the rural northeast even though it was vehemently derided by her opponents. But the axing is not about saving money, it would seem, for on Friday the junta announced that it was increasing the nation’s remaining $37 billion infrastructure improvement budget to $92 billion.

Alright, nobody’s going to cast a ballot for these guys. But still — vote-buying, much?

Supporters of the coup long objected to the Shinawatra government for populist policies they considered tantamount to vote-buying (high-speed rail was one, a disastrous rice-pledging scheme was another). Curiously, though, the military’s new ramped up infrastructure plans include a seaport, the expansion of the capital’s two airports and dual-track railways along six routes. And that’s just to start with. Presumably the junta will have another term for this than “vote-buying,” just as it shrinks from the word “coup.” But with apologies, gentlemen, the c-word really does suit you. 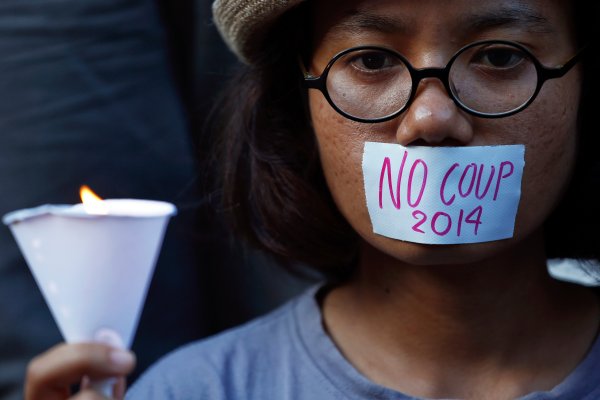 The Thai Junta Wants To Force Critics Living Abroad To Return Home
Next Up: Editor's Pick