Nearly every Wednesday night for the past two years, the Robertson clan has seized American hearts with A&E’s weekly portrait of their life in the Louisiana swamplands: their joys, their heartaches, their barbecue, their family-operated, multimillion-dollar duck-call business.

It seems their days could be numbered, though. Even in spite of a guest showing by Louisiana Governor Bobby Jindal, the premiere of Duck Dynasty’s sixth season aired on Wednesday night to the lowest ratings the series has seen since fall 2012, continuing a months-long downhill slide in viewership.

For a while, the show seemed to have little to worry about. The Robertsons were goofy enough to laugh at and insightful — and indeed genuinely funny — enough to keep watching, and America ate it up with gusto. In April 2013, the series became the most successful program in A&E’s 30-year history; four months later, its fourth season premiere was the most watched nonfiction telecast ever to air on cable television. The family released a Christmas album. Walmart made a killing selling everything from clothing to greeting cards branded with the characters and their best one-liners. “They call me the Beaver Commander,” proclaims one graphic tee bearing the face of Uncle Si, the more eccentric of the two brothers who run the Robertson’s duck call operation.

But it isn’t Si’s sexual innuendos that have placed Duck Dynasty — and the $400 million dynasty built around it — in hot water in recent months.

Last December, his older brother Phil, a former Louisiana Tech quarterback and the patriarch of the whole Robertson crowd, sat down with GQ for an interview that at least started out innocently enough. The 4,000-plus-word profile that ran online and then in the magazine’s January 2014 issue begins with the journalist, Drew Magary, going out hunting with Phil, which is fitting. And then, apparently unprompted, the eldest Robertson begins placing on the record his thoughts on the ways of the modern world — namely, gay sex.

“It seems like, to me, a vagina — as a man — would be more desirable than a man’s anus,” he said, in one of several colorful lines that would prompt a national outcry. “That’s just me. I’m just thinking: There’s more there! She’s got more to offer. I mean, come on, dudes! You know what I’m saying? But hey, sin: It’s not logical, my man. It’s just not logical.”

The backlash, as backlash in America is these days, was immediate and almost too loud to comprehend. There was a reaction and reactions to the reaction; a media campaign condemning Robertson’s bigotry; A&E’s temporary suspension of Robertson from the show; and a surge in Walmart’s sales of Dynasty paraphernalia encouraged by the show’s fiercely loyal core audience. But in the end, the cutesy, simple-living ways of America’s favorite backwater millionaires just weren’t that funny anymore.

The show’s fifth season ended in April to an audience that had shrunk by 2.4 million from the record-setting finale a year earlier. To many, Robertson’s remarks to GQ had sunk the Dynasty ship, or at least slowed it down considerably.

Some 4.6 million Americans tuned in to watch Wednesday night’s episode, a conspicuous low in spite of what some may see as a major gimmick: Governor Jindal showing up to commend the Robertsons for their family values. Jindal, who supported the family when things got messy last winter, is said to be eyeing the Republican nomination for the 2016 presidential election, and going on national television to pray with group of outspoken Christians presumably can’t hurt with traditional conservative voters.

But even though fewer Americans, traditional conservative voters or otherwise, watched the season premiere than in the past, the series isn’t obviously floundering. Based on ratings alone, Duck Dynasty is still “cable’s reigning reality show,” Hollywood Reporter says — but perhaps that speaks more to the competition. 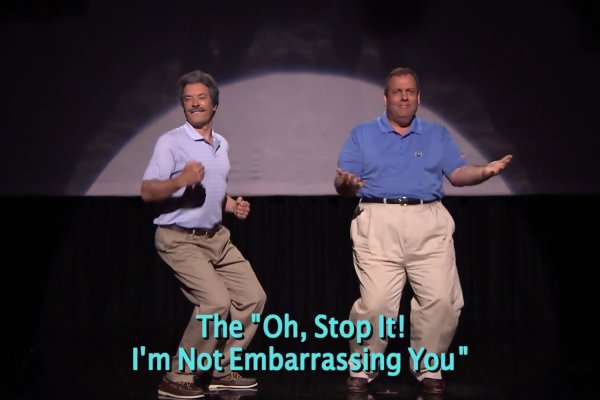 WATCH: Chris Christie and the Evolution of Dad Dancing
Next Up: Editor's Pick