A jacket belonging to an Iraqi Army uniform lies on the ground in front of the remains of a burnt out Iraqi army vehicle close to the Kukjali Iraqi Army checkpoint, some 10km east of the northern city of Mosul, Iraq on June 11, 2014.
Safin Hamed—AFP/Getty Images
By Denver Nicks

U.S. citizens working for military contractors in Iraq are being evacuated from the country as the security situation worsens with Islamist militants descending on Baghdad.

“We can confirm that U.S. citizens, under contract to the Government of Iraq, in support of the U.S. Foreign Military Sales (FMS) program in Iraq, are being temporarily relocated by their companies due to security concerns in the area,” U.S. State Department spokeswoman Jen Psaki said in a statement Thursday.

Lockheed Martin confirmed to TIME its employees are evacuating the country.

“For their safety and security, a small cadre of LM employees is evacuating Balad [Airbase] as part of the overall U.S. evacuation efforts. We are fully aware of the unfolding situation in Iraq and are working closely with the U.S. government to ensure the safety and protection of all of our employees,” a spokesperson said. “All Lockheed Martin employees are safe and secure at this time.”

Diplomatic officials will remain in the country for the moment. “The status of the staffing at the U.S. Embassy and Consulates has not changed,” Psaki said.

The security situation in Iraq has been deteriorating rapidly, with Islamist Sunni militants waging a successful campaign for control of key cities, including the second-largest city and the largest oil refinery in the country. The Iraqi government has asked the Obama administration to provide military aid in the form of airstrikes — something Obama says he has not taken off the table.

“We are actively considering requests from the Iraqi government and looking very closely at other efforts we can undertake to assist Iraq in this very serious situation,” White House spokesperson Jay Carney told reporters Thursday. He added: “We are not contemplating ground troops. I want to be clear about that.”

Psaki did not offer further details on the number of contractors or embassy officials in the country. According to a Pentagon report, in January 2014 there were 820 American contractors (out of 3,234 in total) working with the Department of Defense in Iraq. 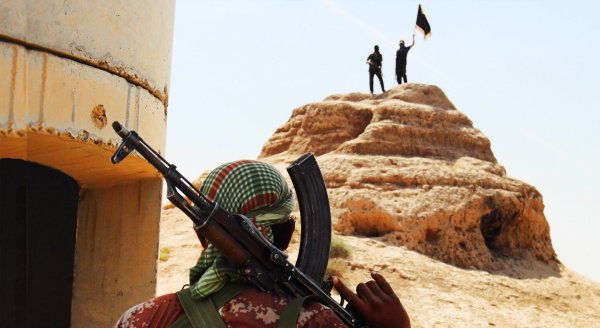 Gas Prices May Rise Over Iraq
Next Up: Editor's Pick