No, Hillary Clinton Didn't Lose Her Cool on NPR

NPR’s Terry Gross tried to get Hillary Clinton to make some hard choices in an interview on Fresh Air Thursday, asking her if her opinions on gay marriage had changed from against to for, or if she had always supported gay marriage but had kept her views concealed until 2013 for political reasons. Neither answer is particularly flattering, and the Hard Choices author and possible presidential hopeful knew that. So she evaded, and then towards the end of the interview, she pushed back.

The media reaction was instantaneous: “Hillary Clinton gets testy over gay marriage,” the Politico headline reads. Similar accounts of Clinton “snapping at” or “sparring with” interviewer Terry Gross over her position abound.

It’s bad enough that she has to answer for her husband’s decisions as president. Hillary Clinton did not sign the Defense of Marriage Act; Bill Clinton did. And, as Hillary Clinton points out at the end of her NPR discussion, 1996 was a different time: “I did not grow up even imagining gay marriage and I don’t think you did either. This was an incredible new and important idea that people on the front lines of the gay right movement began to talk about, and slowly but surely convinced others about the rightness of that position. When I was ready to say what I said, I said it.”

And yet Clinton was asked to defend DOMA when Gross asked, “And DOMA was actually signed by your husband when he was president. In spite of the fact that he signed it, were you glad at this point that the Supreme Court struck some of it down?”

Clinton of course began by evading the question—as many politicians do. And then Gross asked her to clarify—as many reporters do. That’s when things got tense.

But before we become too critical of Clinton, let’s remember that she used the same rhetoric that President Obama used as well, when defending the “evolution” of his stance on gay marriage. Clinton said, “I think that we have all evolved, and it’s been one of the fastest, most sweeping transformations that I’m aware of.”

Obama said something similar in 2010: “My feelings about this are constantly evolving.” In 2004, the president said he believed marriage was “something sanctified between a man and a woman” and that the difference between civil unions and marriages were an issue of “semantics.”

I understand the desire to nail down when Clinton’s views on gay marriage changed and whether they changed for purely political reasons. Though the movement has moved quickly, in a historical perspective, to LGBT activists and allies, and to those who have suffered under discriminatory policies for many years, it’s not moving quickly enough. However, Clinton, as an interviewee, had every right to push back against being boxed into a simple narrative, one in which she is either a reformed homophobe or a political animal.

Some are taking the Gross interview as a sign that Clinton has gotten rusty—that she’s not quite ready for the campaign trail again. But in another light, the fact that she was bold enough to push back suggests that she’s more ready than she was in 2008. 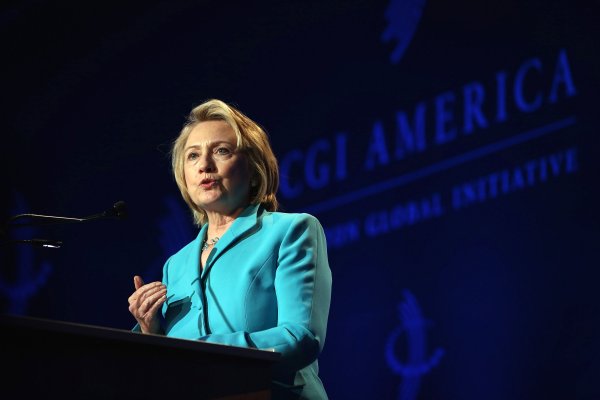 Hillary Clinton Wants You to Call Her a Feminist
Next Up: Editor's Pick