Serbian-born performance artist Marina Abramovic attends a press conference to announce her latest durational performance at the Serpentine Gallery in Hyde Park, central London on June 9, 2014. The performance will last for a total of 512 hours and will begin on June 11.
WILL OLIVER--AFP/Getty Images
By Megan Gibson/London

It was the first thing my editor asked when I told him that I was going to see the Marina Abramović exhibit, 512 Hours, at the Serpentine Gallery. The Serbian-born artist’s exhibit had premiered on June 11 with much fanfare, as long queues had formed outside the gallery and many people were reportedly moved to tears. As a performance artist, Abramović has long used her own body as the subject object, and medium of her work, but how that would play out in 512 Hours wasn’t initially clear. Though she had committed to interacting with an audience at the gallery eight hours a day for 64 days (for a total of 512 hours), she’d also said that it would be open-ended and during those hours “something may or may not happen.” It wasn’t a lot to go on. Yet I couldn’t see myself crying — though many people have been known to weep at an Abramović exhibit — and I told my editor as much.

But when I arrive at the gallery, nestled in London’s Hyde Park, I find myself a little nervous. A gallery employee stamps my wrist and points me toward a room of lockers, where I’m expected to lock up my bag and — most importantly — my cell phone, so I can enter the exhibit unencumbered. I do so, slightly begrudgingly, and head into the exhibit.

The exhibit space is three connecting rooms, all stripped bare with bright white, empty walls. There is no furniture or decoration, except for a simple stage in the middle of the main room. The gallery is filled, however, with people, roughly 100 or so. Some stand near or on the stage, others lean against the wall. There are people of all ages, though I suspect that more than a few of the younger patrons are art students. Still unsure of what to expect, I hover by the doorway and watch.

Abramović, dressed all in black with her long dark hair in a long braid down her back, makes her way slowly through the crowd, approaching members of the audience and leading them to other areas of the gallery. There are about a dozen assistants — also dressed in all black — who do the same. They escort people around the room, quietly instructing them to breathe, to relax, to slow down. Some people are positioned in front of blank walls, others are positioned facing strangers. A few people are instructed to slowly walk the length of the room and back. No one is talking, but there is constant movement.

With the open room and hushed, focused audience, the space has a calm, relaxed vibe, much like a library or a particularly zen yoga studio. Yet I also feel slightly anxious, which I suspect has to do with Abramović and her silent crew of assistants, circling through the space and randomly selecting patrons. Though they couldn’t seem any more benevolent, I still tense up every time one of them nears me.

I’m clearly not the only one who’s slightly uncomfortable. I watch as Abramović approaches a 60-something man who had momentarily entered the exhibit with his wife. The artist reaches out to take his hand and I am close enough to hear her whisper, “Close your eyes and trust me,” in his ear. She then guides him, slowly, into another room of the exhibit. A few minutes later she returns, takes the man’s wife by the hand and leads her in the same direction. A few more minutes pass, then the couple walk, quickly, back through the main room and out the door, leaving the exhibit less than 10 minutes after they arrived.

Another woman, who appears to be in her 30s, walks out of the gallery, exclaiming that the exhibit is “preposterous.” Yet other people are clearly enjoying themselves. Many sit on the floor and several have even taken off their shoes. Outside the gallery, one 20-something woman says that she “felt a real connection to the other people and to the performance artists.”

Others compare the exhibit to Abramović’s 2010 exhibit, The Artist Is Here, at the Museum of Modern Art in New York, where she had sat unmoving as observers were invited to sit across from her. That exhibit was seen by some 750,000 people, but one woman says she found 512 Hours more moving, “because it engaged more of the audience at the same time.”

Back inside, a young, small assistant with a pixie cut engages with me. She smiles and gently takes my hand, lacing her fingers through mine, which strikes me as quite an intimate way to touch a stranger. She leads me — slowly, of course — onto the small stage in the middle of the room and softly instructs me to close my eyes. I do. She then places one hand on my chest and another hand on my back. “Breathe in through your nose and hold it,” she whispers. I do. “Now breathe out through your mouth. Listen to the space, feel the energy of the other people.” I do — and suddenly I am very relaxed.

When I open my eyes again, the assistant has moved on and many of the people who had been standing around me are also gone. I realize I’ve been in the gallery for far longer than I intended — about 90 minutes — and I should be going. But I wait for a few more moments, watching as fresh faces are led around the room. I no longer feel anxious and, much to my editor’s disappointment, I’m sure, I also don’t feel like crying. I do feel calm though and very much at peace, which is more than enough for me. 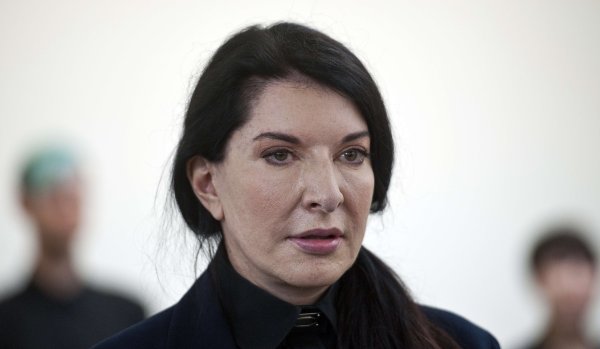