Why All the Controversy About a Black Woman Breastfeeding?

When Karlesha Thurman posted a photo of herself breastfeeding during her college graduation ceremony, she never expected to stir up a national controversy about breastfeeding and race. She was met with a flurry of negative comments about her decision to nurse her daughter in public.

“I honestly thought that as a society, people were more understanding of breast-feeding,” Thurman, 25, told the Today Show. “It’s not disgusting, it’s not a bad thing, it’s not a negative thing.”

So why has the image of Thurman breastfeeding caused such a kerfuffle? The photo put a spotlight on the African American community’s complicated relationship with breastfeeding. After some of the more negative comments were tweeted, the photo was picked up by Black Women Do Breastfeed, a page devoted to celebrating black women who nurse. Data from the Center for Disease Control clearly shows that in some states black mothers are 20% less likely to breastfeed than white mothers, a possible indication that black women are more comfortable with formula feeding.

“One of the major problems is that we don’t see it, so it’s not a normal behavior for women,” said Dalvery Blackwell, co-founder and project director of the African American Breastfeeding Network in Milwaukee. “In our community, when we walk outside, we don’t see women breastfeeding. Among Caucasian women, breastfeeding and lactation is part of a normal conversation. We’re not having those conversations in our homes, churches, schools, etc, and we need to change that.”

Whatever the reason, breastfeeding is now on the rise among African-American women; 59% of black mothers said they breastfed in 2008, compared to 47% in 2000. The American Academy of Pediatrics recommends that infants breastfeed for at least the first six months, and ideally continue until they’re at least one year old. But whether a mother chooses to breastfeed depends on a host of factors, like whether her peers are nursing and whether she has paid maternity leave.

“In order to change behavior and truly start integrating this form of nutrition, we have to see it,” Blackwell said. “Someone once said to me ‘thank you for breastfeeding in public,’ so now when I see a mom breastfeeding I stop my car and go up to her and say ‘thank you.’

But it’s not just social conventions that are keeping African American mothers from breastfeeding; as with women of every race, there are serious professional obstacles. “The system has made it difficult in terms of maternity leave, family policy, and lactation spaces,” Blackwell said. “How does it feel to say to your boss ‘I need to take a break so I can pump.’ How is that going to work at McDonalds?”

Another CDC report on breastfeeding confirms that “low-income women, among whom African-American and Hispanic women are over-represented, are more likely than their higher-income counterparts to return to work earlier,” and often to jobs that make it challenging to breastfeed during the day.

Despite some of the negative comments, Thurman has also received an outpouring of support, and the controversy over her photo has caused other African-American women to speak openly about breastfeeding. One message on Black Women Do Breastfeed said, “I have found that Black Americans seem to have more of an issue with the topic then our counterparts around the world.
Thank you for spreading the word. Because yes, black women breastfeed.” 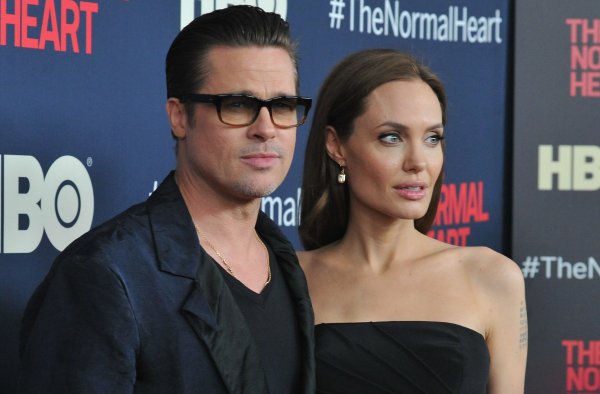 Angelina Jolie Knows How Lucky She Is and Isn't Embarrassed to Talk About It
Next Up: Editor's Pick