Rick Perry Is Not a Neanderthal, Says Rick Perry

Scoring a zero on any test is harder than it seems. Unless you leave the answers entirely blank, mere guesswork and randomness suggest you’re going to get enough things right to put a few points on the board. So kudos to Governor Rick Perry for managing an impressively perfect goose egg on a recent lightning round of science topics.

Perry’s latest amble through know-nothingism came at a Q&A in San Francisco on Wednesday, and the biggest headline from that fumble-fest was his comparison of homosexuality to alcoholism. Now, a prudent man might stop to reflect on whether, if you’re going to say something so colossally, head-spinningly wrong, San Francisco is really the venue you want to choose. But never mind. The moderator asked the governor whether he believed homosexuality is a disorder, and the governor swung at the pitch.

“Whether or not you feel compelled to follow a particular lifestyle or not,” said the thrice-elected leader of a state of 26 million people, “you have the ability to decide not to do that. I may have the genetic coding that I’m inclined to be an alcoholic, but I have the desire not to do that, and I look at the homosexual issue the same way.”

So where to begin? With the comparison of sexual orientation to what is often a fatal disease? With the airy reference to “genetic coding,” which whatever the governor thinks the term means, reveals almost no familiarity with the deep and smart research that’s been done in recent years on the biological roots of any one person’s sexual orientation? Or with the belief that it’s healthy or even possible for a gay man or woman simply to “desire not to do that.” You’re a heterosexual, governor. How would a lifetime of “not doing that” work for you?

Perry doubled down on dumb when it came to the topic of “reparative therapy,” the all-but-universally condemned practice of trying to convert people from homosexuality to heterosexuality. The draft platform of the Texas Republican party endorses the dangerous faux-treatment for “patients [sic] who are seeking to escape from the homosexual lifestyle.” When Perry was asked if the therapy works, he demurred, saying he doesn’t know. Fine, but you know who does know? The American Psychiatric Association. And you know what they have to say about it? This:

For the record, blood-letting, rattle-shaking and leeching won’t work either, so the Texas GOP probably wants to keep them out of the platform too.

Perry next pivoted—inevitably—to global warming. He began by stating his opposition to carbon caps or taxes, which he insists would “strangle” the economy — a powerful argument, if economists agreed with him (they don’t), and if cap and trade hadn’t worked extraordinarily well to control the sulfur dioxide that led to acid rain, which it did, during the boom times of the 1990s.

The larger problem, Perry suggested, might be the climate scientists themselves, who take the position that, “You either believe this all the way, or you’re a Neanderthal.” But here’s the thing—for the billionth time—the scientists never, ever speak in absolutes like that. There is no “all the way” when it comes to prescriptions for solving the climate crisis, no universality even about exactly how the problem will unfold over the next years and decades and centuries.

What is scientifically proven is that greenhouse gases lead to global warming and human beings are significant drivers of that problem. The “debate,” like it or not, is over on that score. But the rest? Scientists are the first to say there is lots of wiggle room in their models and their predictions—a lot more than the ideologues on the right who call the whole thing a hoax and stop talking there.

Perry’s time as governor is limited—he leaves office after this year—though his presidential aspirations are currently unknown. The damage he and others like him do, however, endures. There is only so long America can go on embracing scientific rubbish and the politicians who traffic in it—at least if we expect to continue be a leading nation in an increasingly sophisticated world. Perry, for his part, just flunked his leadership test. 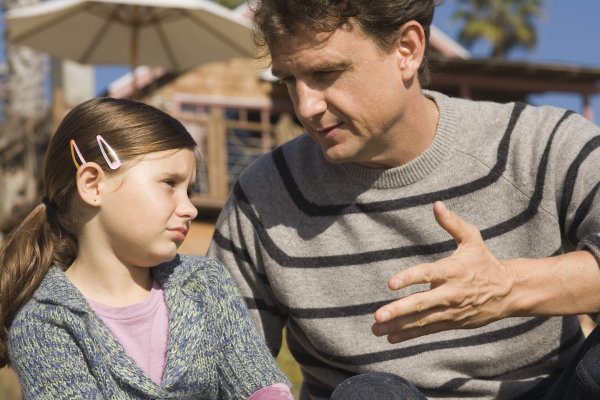 Study: Kids Know When Adults Are Keeping Secrets
Next Up: Editor's Pick