An image grab taken from a propaganda video uploaded on June 8, 2014, by the jihadist group the Islamic State of Iraq and the Levant (ISIL) allegedly shows ISIL militants firing from the back of a vehicle near the central Iraqi city of Tikrit.
AFP/Getty Images
By Aryn Baker and Karl Vick

As Islamist extremists captured Tikrit, a major city in Iraq’s Sunni heartland, just a day after taking Mosul, analysts offered sobering assessments of a fundamentalist militant force whose ambitions may no longer be the stuff of fantasy.

Hardened by years of battle in neighboring Syria, the Islamic State of Iraq and Greater Syria (ISIS) is routing the forces of a modern nation-state and gathering land with the ultimate goal of establishing an alternate form of governance, an Islamic caliphate.

“This is not a terrorism problem anymore,” says Jessica Lewis, an expert on ISIS at the Institute for the Study of War, a Washington think tank. “This is an army on the move in Iraq and Syria, and they are taking terrain.”

In capturing Tikrit, famed as the hometown of Saddam Hussein, Islamist militants whom the secular dictator had not tolerated were moving south down Iraq’s main highway toward Baghdad. Lewis cited reports that Abu Ghraib, the city just to the west of the capital, was also under assault from ISIS forces that have held Fallujah and much of Ramadi since January.

“We are using the word encircle,” Lewis tells TIME. “They have shadow governments in and around Baghdad, and they have an aspirational goal to govern. I don’t know whether they want to control Baghdad, or if they want to destroy the functions of the Iraqi state, but either way the outcome will be disastrous for Iraq.”

There was little argument on that point on Wednesday among the American specialists who came to know the country well during the almost nine years U.S. forces remained there, yet faced no opposition as militarily organized as ISIS. The Sunni extremists at the time were known to the U.S. military as AQI, for al-Qaeda in Iraq.

“They were great terrorists,” says Douglas Ollivant, a former Army Cavalry officer who later handled Iraq for the White House National Security Council. “They made great car bombs. But they were lousy line infantry, and if you got them in a firefight, they’d die. They have now repaired that deficiency.”

Like other analysts, Ollivant credits the civil war in Syria for the striking improvement in battlefield ability. “You fight Hizballah for a couple of years, and you either die or you get a lot better,” he says. “And these guys got a lot better.”

Lewis, who was a U.S. Army intelligence officer in Iraq and Afghanistan, calls ISIS “an advanced military leadership.” “They have incredible command and control and they have a sophisticated reporting mechanism from the field that can relay tactics and directives up and down the line,” he said. “They are well-financed, and they have big sources of manpower, not just the foreign fighters, but also prisoner escapees.” In Mosul, many of the estimated 1,200 prisoners released as the city fell were thought to be Islamist militants.

“They are highly skilled in urban guerrilla warfare while the new Iraqi army simply lacks tactical competence,” says Aymenn Jawad Al-Tamimi, who monitors jihadist activity for the Middle East Forum. In a battle that is fought largely on sectarian lines — Iraq’s government under Prime Minister Nouri al-Maliki has championed the country’s Shiite majority — Iraqi officials have solicited Shiite militias to engage the ISIS, “though they prove to be equally incompetent,” al-Tamimi adds.

Ollivant, now a fellow at the New America Foundation, says that despite the thunderclap of Mosul’s collapse after only four days of fighting, it’s not yet apparent how formidable ISIS really is. The windfall of military materiel left behind by fleeing Iraqi forces—especially simple weapons and ammunition, because they do not require complex maintenance—are significant, but less so than the group’s operational depth: “Is it holding what it’s taking or is it just kind of sweeping through and moving on to the next thing, leaving only a skeletal force behind, that would be easy enough to push out,” says Ollivant. “Or is it strong enough to hold the territory it’s taken? Those are the two options. One is embarrassing, the other is catastrophic.”

But if ISIS can in fact hold the area it has overrun, it may well be able to fulfill its stated mission of restoring the Caliphate, the governing structure for the Sunni Muslim world that inherited authority from the Prophet Mohammed. “This is of great significance,” according to an assessment released Wednesday by The Soufan Group, a private security company. A restored Caliphate will attract “many more disaffected young people … from all over the Muslim world, especially the Middle East, lured by nostalgia for al-Khulafa al-Islamiya (the Islamic Caliphate), which remains a potent motivator for Sunni extremists.”

Restoring the Caliphate was the stated goal of Osama bin Laden in creating al-Qaeda, but the terror group has never operated militarily. “It’s ISIS that will build the Caliphate, not al-Qaeda,” says al-Tamimi.

The entire concept of the Caliphate remains obscure to most Westerners. It has not existed since the Ottoman Empire (which claimed dominion over the world’s Muslims) was pulled apart after World War I. The European powers divided the Middle East into their preferred system of governance–nation states–though that arrangement lately seems under threat, especially in Syria and Iraq.

Thomas Ricks, who covered the U.S.-led invasion of Iraq for the Washington Post and named his bestselling account of the subject Fiasco, says the current crisis in Iraq was set in motion over a decade ago. “I think that the U.S. invasion fundamentally unbalanced Iraq, and the Middle East,” Ricks tells TIME in an e-mail. “By removing Sunni power in Baghdad we increased Iran’s influence in the country–and so provoked a Sunni backlash. Big picture, I think we may be seeing the beginning of the re-drawing of the map, this time done by residents of the region instead of by British and French diplomats.”

With reporting from Hania Mourtada in Beirut 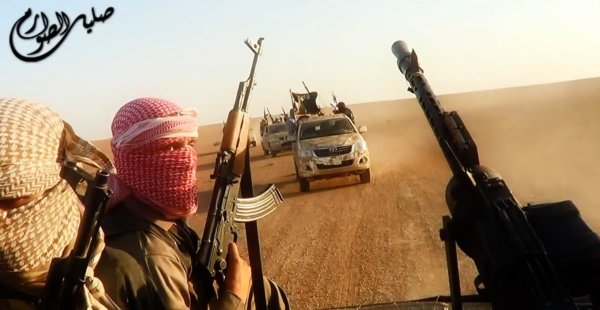 Islamist Militants in Iraq Seize Control of Tikrit
Next Up: Editor's Pick