There’s next to nothing Congress can do about the Obama Administration’s swapping five senior Taliban leaders for long-imprisoned Army Sgt. Bowe Bergdahl. That means they can only vent their outrage over the done deal. They finally got a chance to do that Wednesday when Defense Secretary Chuck Hagel traveled to Capitol Hill to retro-justify the trade.

Both Republican and Democratic members of the 62-member House Armed Services Committee criticized the way the deal was carried out, and the ultimate price paid by the U.S. The fact that they couldn’t reverse the deal only exacerbated their anger, and led them to tongue-lash Hagel.

“I don’t like the implication of the question,” Hagel countered.

It quickly became clear that the tussle wasn’t over Bergdahl’s fate so much, or even Hagel, as it was about the stark lack of trust between the Administration and Congress. President Barack Obama’s point man was little more than a piñata to lawmakers, who seemed more intent on bashing the President than listening to Hagel’s justifications, or the legal reasoning of Stephen Preston, the Pentagon’s top lawyer.

Rep. Adam Smith (D-Wash.), the senior Democrat on the panel, offered cover, of a sort, to the Pentagon. “The Department of Defense, in my experience, has been very good about consulting with us and about working with this body,” he said. “The White House, on the other hand, has not been very good about keeping in touch with Congress.”

Hagel acknowledged legitimate reasons for congressional ire, but cited the need for swiftness and secrecy for keeping lawmakers in the dark about the deal, despite a law requiring the White House to notify Congress 30 days before any detainees leave Guantanamo. “I recognize that the speed with which we moved in this case has caused great frustration, legitimate questions and concern,” he said. “We could have done a better job… of keeping you informed.”

Lawmakers didn’t focus on the fact that Army General Martin Dempsey, the chairman of the Joint Chiefs of Staff, and Admiral James Winnefeld, the vice chairman—the nation’s top two military officers—approved of the swap. While many in the military didn’t like the particulars of the deal, they thought getting Bergdahl home was the top priority. “He may be a son-of-a-bitch, but he’s our son-of -a-bitch,” James Mattis, a retired four-star Marine general who served as chief of U.S. Central Command from 2010 to 2013, said earlier this week. “So let’s get him back, let the Army investigate, and we’ll sort it out.”

As the hearing droned on, the Washington Post disclosed some of Bergdahl’s pre-capture writings—and the fact that the Coast Guard had discharged him for psychological reasons in 2006 after 26 days in basic training. That should have required the Army to issue a waiver allowing him to enlist, something the service was routinely doing because it was having difficulty attracting sufficient soldiers when Bergdahl enlisted in 2008.

Some of the facts left Hagel flailing. While the five Taliban released “were part of the planning” of attacks on the U.S. and its allies, he said, “we have no direct evidence of any direct involvement [by them] in direct attacks on the United States or any of our troops.”

Rep. Mac Thornberry (R-Texas) seized the opening: “So your point was they didn’t pull the trigger, but they were senior commanders of the Taliban military who directed operations against the United States and its coalition partners. Would that be a better way to do it?”

“Just like bin Laden didn’t pull a trigger,” McKeon said after a pause.

Rep. Walter Jones (R-N.C.) expressed chagrin that Bergdahl’s release wasn’t part of a bigger peace accord. “My Marines down in Camp Lejeune, quite frankly, are tired of going to Afghanistan and getting their legs blown off,” he said.

Despite the venom, lawmakers had little interest in swinging at Hagel, other than as a way to smack Obama. And they had political cover: A pair of polls released Tuesday said more Americans opposed than supported the deal.

That adds jet fuel to the controversy, which only means it will continue to burn. Beyond the Army’s investigation into the circumstances surrounding Bergdahl’s capture, McKeon opened the hearing by promising his panel will conduct “a full investigation” surrounding the deal that won Bergdahl his freedom. 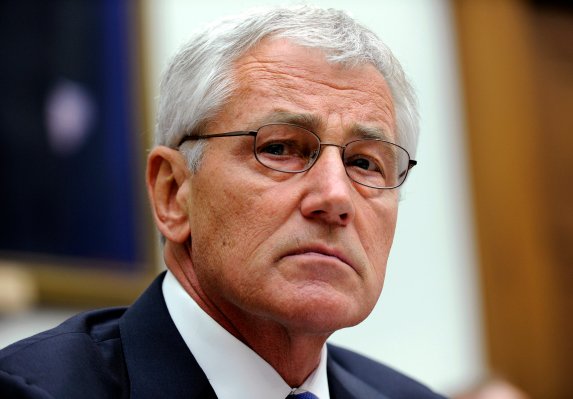