An e-cigarette in Paris on March 05, 2013.
Kenzo Tribouillard—AFP/Getty Images
By Eliza Gray

It’s a critical time for the e-cigarette industry. In April, the FDA announced proposed rules to regulate e-cigarettes as tobacco products. The announcement kicked off a period of public comment so that e-cig makers and public health experts can raise concerns and give the FDA the necessary facts to write an appropriate set of final rules. Regulation is just like writing the rules of a new game—on one side there are businesses vying for industry-friendly regs, and on the other are public health advocates.

So far, it looks like the businesses are winning. When the FDA first announced the start of the rule-making process, Time wrote about the positive reaction to them by e-cigarette executives, who saw them as a reasonable first step that would not greatly interfere with their businesses. Now, a few weeks into the rule-making process, business continues to be optimistic while public health advocates are getting worried.

“The deeming rule that the FDA has proposed is very, very, very limited in its scope,” says Stanton Glantz, a cardiology professor at the University of San Fransisco and one of the most vociferous proponents of strict rules for e-cigs. “It requires a useless warning label and says they can’t be sold to kids under 18, but it doesn’t put any restrictions on internet sales, which means kids under 18 can easily get them. It has no restrictions on marketing at all.” This puzzles Glantz. “You would think that the Obama administration would be supporting tobacco control because it would reduce health care costs.” As far as Glantz is concerned, the administration has erred on the side of the tobacco interests.

Naturally, one of the biggest concerns among health advocates is children’s access to e-cigarettes—and marketing of e-cigs to teens is up 321%, as TIME recently reported. The Centers for Disease Control and Prevention estimates that almost 2 million students in the U.S. have tried e-cigarettes. Policies to address the issue run the gambit from the least controversial—like establishing an age restriction on purchasing e-cigs and child proof packaging—to the more divisive, like prohibiting marketing to teens, prohibiting internet sales, and restricting the use of kid-friendly candy-like flavors.

Craig Weiss, the CEO of NJOY in Scottsdale, Arizona, one of the leading electronic cigarette brands, also thinks the FDA rules will stay fairly restrained. “The FDA are smart people,” he says. “They have to read everything and they will, but I think what you saw in the proposed regulations, that’s what you are going to see in the ultimate regulations as well.”

As for whether any child-marketing restrictions would make sense down the line, Weiss says there are appropriate curbs, but there is no reason e-cigarette marketing should be as strict as tobacco. “You are confusing the arsonist with the firefighter,” he says. “Why would you treat products that are part of the solution as products that are part of the problem?” he says. Though NJOY is careful not to make direct claims that their products can help smokers quit, Weiss is a big believer in the potential for electronic cigarettes to replace cigarettes. Weiss supports limits on the age of actors in ads and rules against e-cigs appearing in cartoons, but he rejects the idea that there is anything wrong with his ads, which do feature young adults.

That’s not good enough for public health advocates. “The best way to market to kids is to market to young adults,” says Glantz, “If you designed marketing to stop smoking in a 50 year old, it could be done. That’s not what they are doing. It wouldn’t be on MTV, it would be on evening news.”

Weiss responds: “I’m interested in converting every adult smoker in the country to these products. I think it would be a tragedy for smokers to be smokers for decades before we advertise in a way that is appealing to them.”

The battle over e-cig regulation isn’t settled, but if what’s going on now is any indication, that battle may have actually been over—and won by industry—before it even started.
Correction appended: The original version of this story incorrectly described which restrictions are absent from the FDA’s initial deeming rules. 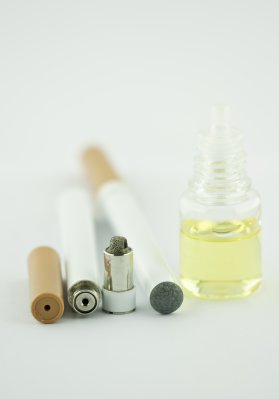 E-Cig Ads Are Luring More Teens Than Ever
Next Up: Editor's Pick