Audra McDonald: Why I Thanked My Parents for Not Putting Me on ADHD Medication

In response to an open letter to me, titled “Sorry, Audra McDonald — My Kid Needs His ADHD Meds.”

I would like first to congratulate you and your son, both on coping with his ADHD diagnosis and on coming to a solution that works for you.

If my speech in any way offended you, I do apologize. However, it was in no way, shape or form intended as a platform for me to denounce the use of medication for ADHD or any other psychological disorder. I myself have benefited from psychotropic drugs to help combat depression in my youth.

The decision of whether or not to medicate a child is a very personal, difficult and subjective one. What works for one child doesn’t necessarily work for another. But in the end, as a parent, all that matters is that you do everything within your power to help your child. You sound like a mother who is fiercely dedicated to your child and his well-being. My mother is also someone who was — and still is — quite fiercely dedicated to her children and their well-being. (In fact, she very much wanted to be the one to respond to your letter.) In the 1970s, when the term ADHD hadn’t even really been coined yet, and Ritalin was still a relatively new drug being prescribed for hyperactive children, my mother and late father were struggling with their very sensitive, overdramatic, hyperactive 8-year-old daughter, who was having serious issues in school. Growing up in my house, “Audra-induced anxiety,” as you put it, had quite a different connotation.

After months of increasingly frustrating, painful moments watching their child struggle, and after talking with psychologists and my teachers — but not yet having the benefit of decades of research, media and social discourse on what was still a relatively new medication — my parents happened to attend a performance at a local dinner theater. Although my family was a very musical one — my dad was a high school music teacher, my grandmothers both taught piano, and, as you yourself were kind enough to bring up in your letter, my aunts used to sing at various black churches in California in the ’50s and ’60s — we were not theatergoers. That night, at that theater in Fresno, Calif., my mother and father saw a troupe of young children performing in a pre-show cabaret. A lightbulb went off in their heads and they decided to encourage me to audition to be a member of this troupe, in hopes that it might be a good outlet for my energy, an oasis for my emotions and possibly a place for me to build some desperately needed confidence. That moment, that decision, that “lightbulb” was what put my feet on the first tiny bricks of the yellow brick road that led me toward the Oz that is my life in the theater. All because they were struggling with the question of how best to help their struggling, unhappy, hyperactive child.

If that moment had not happened — if they had decided to try another tactic (medication or anything else), and I had stayed on what had been my path up until that point — I have no doubt that while my life might have been a fantastic one, it would not have been one in the theater. I have my parents to thank for making what was ultimately a life-changing decision for me.

Last Sunday night, I was overwhelmed with gratitude and love for my parents, who put me on the path that somehow, miraculously led to my standing on that stage, clutching that Tony. I am ashamed to admit that I don’t think I had ever truly thanked them for that before. Unfortunately my father is now deceased, but my mom was there, and I’m so grateful that in the 90 seconds allotted a winner to say thank you — and as the completely addled wreck of an emotional mess that I was at that moment — I was able publicly, from that stage, to look into her tear-filled eyes and acknowledge her struggle and thank her for making that decision. Not for driving me to rehearsals, helping me with my lines or keeping me calm, as you suggest I should have said to her, but for the actual decision she made. That is exactly what I wanted to thank her for, and I did. It was a decision that was very personal, and it ended up being the right one for me. It was a moment for and about my parents and their love for me: nothing else and no one else.

Every parent, when faced with a decision like that, makes it on the basis of real, personal and specific circumstances relating to their child. For some, the right decision is to medicate, for some it is not. For some it is a bit of both, and for some it is any one of a million other variations on the treatment options available. The only common factor that goes into making that decision, which is indisputably true for almost all parents, is the indescribable amount of love they have for their child.

I’m positive that your son will someday recognize that he has a mother who is fiercely devoted to him and that every decision she ever made was out of love for the child he is and the adult he will become. My best wishes to you both.

Audra McDonald is a mother, activist and a six-time Tony Award–winning singer and actress. 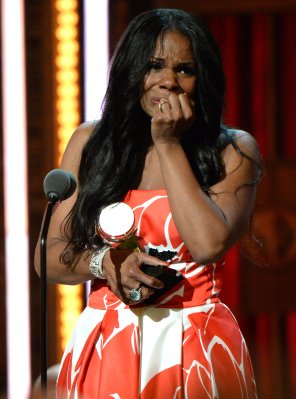 Sorry, Audra McDonald: My Kid Needs His ADHD Meds
Next Up: Editor's Pick