Xbox One vs. PS4: Battle of the Exclusives

As Microsoft and Sony try to win gamers over to their respective consoles, both companies used E3 2014 as a battleground for “exclusives” that the rival platform doesn’t have. That means choosing between an Xbox One or PlayStation 4 isn’t just about features or price points, it’s about personal preference for games that will only appear on that platform.

It’ll be a while until many of these exclusives are even available, but here’s the rundown in chronological order:

What it is: A relaxing game where you simultaneously guide two characters through tunnel-like dreamscapes, using opposite thumbsticks. The goal is to unify them over time, so they transform into a great dragon.

What it is: An open-world racing game with obsessive attention to vehicle detail and realism, set in southern Europe.

What it is: A racing game in which players can create teams and take to the road together. It won’t be an ultra-realistic simulator like Gran Turismo, but it won’t be too arcade-like either.

What it is: Much like the Sorcerer’s Apprentice, you use a series of gestures–tracked by the Xbox Kinect sensor–to create music and bring life to the world.

What it is: An acrobatic third-person shooter with a cartoonish, over-the-top art style. Players create their own character and try to save a city in which an addictive energy drink has turned everyone into mutants.

What it is: Every major Halo game re-released, including a newly-remastered version of Halo 2. (Halo 3: ODST and Halo Wars aren’t part of the package.) It’ll also include the live action Halo: Nightfall and access to the Halo 5: Guardians multiplayer beta.

What it is: A cute platform game that encourages players to work together, and lets them create their own levels. LittleBigPlanet 3 adds three new character types to the mix, and will include all 8.7 million user-made levels from the first two games.

What it is: A downloadable sequel to the popular Kinect-driven dance-along. Developer Harmonix says it’s come up with a system for bringing new tracks to the game faster than before.

Xbox One: Ori and the Blind Forest

What it is: An artsy 2D platformer in which you explore a beautiful enchanted forest, gaining new powers along the way.

What it is: A series of games from indie label Devolver Digital, including Hotline Miami: Wrong Number, Broforce, Titan Souls, Not a Hero and The Talos Principle. Most of them are throwbacks to the 8- and 16-bit era with modern twists, while The Talos Principle is a 3D puzzler with a touch of deep philosophy.

What it is: A platformer with a dark, haunting atmosphere, somewhat reminiscent of Limbo.

What it is: A new Halo game in which the Master Chief mourns the loss of his AI companion Cortana and goes searching for answers. Details are still scarce, and we haven’t seen the actual game in action yet.

What it is: A gruesome-looking adventure game from Hidetaka Miyazaki, who was behind Demon’s Souls and Dark Souls.

What it is: Possibly a reboot for the open-world Xbox 360 franchise, which let players earn superpowers as they fought crime in a futuristic city.

What it is: A game that seems to involve underwater exploration. It’s from a couple of people who were involved with Journey, so it’ll likely be artistically striking, beautifully scored and somewhat cryptic.

What it is: A multiplayer action-RPG with cooperative play. Also, another player can control “The Villain,” and command an army of foes to attack the good guys.

Release date: Unknown, but a multiplayer beta begins this fall

What it is: An action game involving a human character that can don a set of dragon-like scales, and appears to gain command over various creatures. The studio behind it, PlatinumGames, is well-regarded for games like Bayonetta, Vanquish and MadWorld.

What it is: A third-person, supernatural thriller set in a steampunk version of 19th century London, where beastly, man-eating “half breeds” roam the world.

What it is: A remake or sequel to the original Xbox cult favorite, which combined third-person action with Magic the Gathering-style deck building.

What it is: Another entry in the Indiana Jones-inspired action adventure series. That’s about all we know.

What it is: A four-player, cooperative, top-down action-adventure game involving wizards.

What it is: A sprucing-up of a beloved adventure game, which combines dark comedy with a noir art style. It stars a skeletal travel agent who discovers corruption in the Land of the Dead.

What it is: The next game from oddball designer Suda 51, the guy behind No More Heroes and Lollipop Chainsaw. It seems to involve a lot of killing, but that’s about all we know.

What it is: A world where everything, from the creatures to the environment to the surrounding galaxy, is created algorithmically. Players are plunked on one of these computer-generated planets, and can then explore the universe while meeting with other players. It looks pretty trippy.

For a handful of larger games that aren’t Xbox exclusives, Microsoft is getting first dibs on additional content, sold after the games launch. These games include Call of Duty: Advanced Warfare, Assassin’s Creed: Unity, The Division, Dragon Age: Inquisition and Evolve.

Sony isn’t as interested in getting downloadable content first, but instead wants to give players an earlier taste of upcoming games. Both Destiny and Battlefield Hardline will include early beta access on the PS4, and players can also check out a Destiny alpha this Thursday. 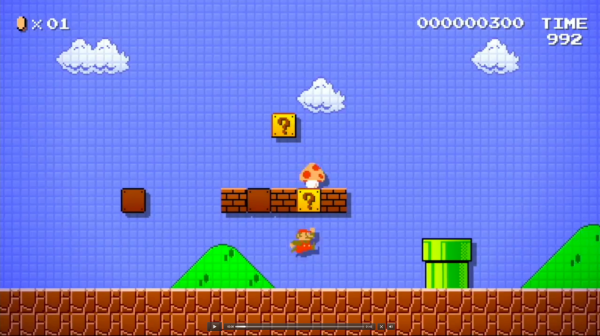 Mario Maker for Wii U Lets You Build Your Own Levels
Next Up: Editor's Pick