Even Cowboys Feel Pain at the Pump: Pickups Go Green

In the world of pickup trucks, the advertising skews toward patriotic-themed, macho messaging focused on toughness and raw engine power. Buy this overpowered truck because it makes America great! Behind the bluster, though, are some less-muscular realities. Fuel economy, technology and comfort are what really count, even with those rugged cowboys and construction workers. That’s why pickup buyers and manufacturers are getting greener than a Boulder farmers’ market.

Like the rest of the auto industry, pickups are having a very good year, with the industry approaching unit sales of two million. One of the hotter new pickups this year is also one of the most fuel efficient. Fiat Chrysler Automobile’s 2014 model Ram 1500 EcoDiesel hit the road in February with a 3.0 liter, V-6 engine that sports a 28 mpg highway rating. FCA says the fuel rating is the best ever achieved by a full-size, half-ton pickup—the most popular version. “We are churning sales, “says Bob Lee, the head of Chrysler’s power train division. “In eight days [on the lot] they are gone. It’s moving incredibly fast.” That’s one reason Ram sales were up 17% in May, as Chrysler continues to gain share in the category.

The company says that about half the buyers of new 1500s are opting for the EcoDiesel version. That’s an amazing stat given that Americans have never cottoned to diesels on anything other than heavy-duty trucks. But they do favor fuel efficiency with gasoline around $3.65 a gallon nationally. At Ford, the company reports that 42% of retail buyers are choosing F-150s with its 3.5 liter EcoBoost V-6, which gets 22 mpg. At General Motors, the company has added bi-fuel capability to all of its heavy-duty 2015 Chevrolet Silverado 2500HD and 3500HD, which allow customers to use compressed natural gas (CNG). Chevy says that will save them $2,000 a year in fuel costs for a vehicle driven 26,000 annually, based on current fuel prices. Ride on, you CNG cowboys.

Chrysler’s decision to develop a diesel for its smaller pickups started in 2005 when the company undertook an exercise to document where all the energy was going in the large 4.7 liter engine that powered many of its pickups. “The diesel showed up early and that was where you could have a big gain [in efficiency],” says Lee. The company also went to work on aerodynamics, and even the axel, which was sucking up 8% of the energy.

Diesels are more efficient than gas-powered cars but potentially dirtier, making the technology challenge a lot tougher. “The injection pressures are high, tolerances are tight and in the U.S., onboard diagnostics are extremely complicated,” says Lee. More importantly Chrysler’s aim was to pass muster with California’s strict regulations. “California wants to make sure the technology works.” It did.

Ford meanwhile, has been working on a technical challenge of its own. Later this year the company will introduce a new F-150 which, as newly named CEO Mark Fields modestly claims, “redefines the future of trucks” in that it will feature greater use of high-strength, military-grade, aluminum alloys in the body. That, along with more high-strength steel in the frame, allowed Ford to lower the vehicle weight by some 700 lbs. Shedding weight will improve fuel economy and acceleration, but it also allows the company to equip the pickup with a new, smaller 2.7-liter EcoBoost with auto Start-Stop. That also enhances fuel economy.

The F-150 is so important to Ford—it is one of the company’s iconic products and the industry’s best seller– that it can’t afford to produce anything that’s less than outstanding. The company says that more than 100 new patents are part of the F-150’s redesign. Ford has even overhauled the pickup’s badge, taking the hyphen out of F-150—now it’s F150—which the company says “adds to the message of efficiency.” Wonder if the hyphen is available as an option. 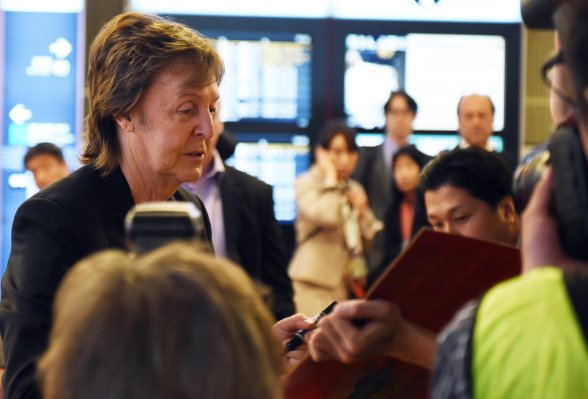