No one is believed to have died in the attack, although local media is reporting several wounded.

Pakistan’s Geo TV says the situation is now under control and security forces are conducting a door-to-door search of the area to apprehend the assailants.

The academy lies near Karachi’s international airport, which was under siege by Pakistani Taliban militants on Sunday night. Some 36 people died in that attack, including 10 Taliban gunmen

The Associated Press quoted Ghulam Abbas Memon, a spokesman for the ASF, saying Tuesday’s assault involved gunmen trying to enter the campus from two different entrances but who were repelled by security forces.

An AFP report had earlier quoted an ASF official spokesman as saying gunmen exchanged fire with security personnel at a checkpoint half a kilometer from the airport.

The assault is believed to be in retaliation for Pakistani military air strikes on a tribal district earlier Tuesday that killed 15 militants. Those strikes were, in turn, apparently in response to Monday’s airport attack.

All flights from Karachi’s international airport were briefly suspended but have now apparently resumed. 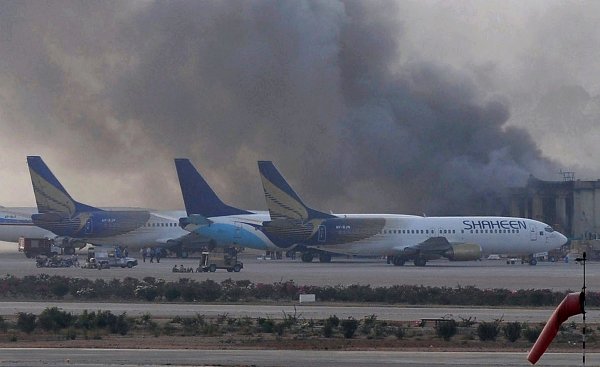