It’s been known for months that James Cameron intends to make not one but a trilogy of sequels to his 2009 sci-fi hit Avatar, shooting them back-to-back and releasing them in rapid succession between 2016 and 2018. (Perhaps overkill looks better in 3-D?)

Cameron and 20th Century Fox have confirmed that Sigourney Weaver will return to the cast for the three new films, Deadline Hollywood reported on Monday. She’s slated to play a character “different and in many ways more challenging” than Dr. Grace Augustine, the gritty, chain-smoking scientist she portrayed in the first movie — which makes sense, since Augustine died in the original after taking a bullet to the torso.

“Sigourney and I have a long creative history, dating back to 1985 when we made Aliens,” Cameron said in a statement. “We’re good friends who’ve always worked well together, so it just feels right that she’s coming back for the Avatar sequels.”

She’ll be joined in the sequels by a few of her original co-stars: Sam Worthington and Zoe Saldana — the U.S. Marine and the bright blue alien he falls for — and Stephen Lang, who we can presume will also be filling a new role, since his character met an untimely end in the first film as well.

Other than a tepidly received vampire movie in 2012, Weaver has recently been keeping a relatively low profile in Hollywood, although she did earn some acclaim for her role as Elaine Barrish, the First Lady turned presidential candidate turned Secretary of State (i.e. a pretty shameless Hillary Clinton proxy) in the miniseries Political Animals two summers ago. 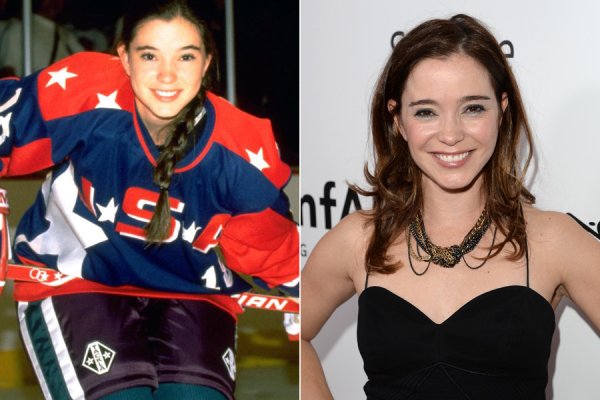 The Mighty Ducks Then and Now: See the Cast 20 Years Later
Next Up: Editor's Pick