College staff working at VNR Vignana Jyothi Institute of Engineering and Technology gather on campus on the outskirts of Hyderabad, India, on June 9, 2014
Mahesh Kumar —AP
By Melissa Hellmann

A group of 24 engineering students were swept into a surging river in northern India’s Himachal Pradesh on Sunday and are feared drowned.

The students, from VNR Vignana Jyothi Institute of Engineering and Technology in the southern city of Hyderabad, were on a 10-day field trip near the hill town of Manali. They had stopped to take pictures by the bank of Beas River on Sunday evening when a sudden gush of water from the Larji hydropower-station dam washed them into the turbulent river.

A surviving student named Sumiran told the Indian Express newspaper that the students “fell flat and disappeared under the waves.”

Search teams scoured the river on Monday for signs of the missing students but recovered only four bodies. Regional police chief Anurag Sharma told the Associated Press that officials feared “the chances of finding survivors are slim.”

The chief minister of Himachal Pradesh, Virbhadra Singh, blamed the accident on the construction of the dam, ordering that the engineer in charge be suspended until further investigation.

Local media reported that distraught citizens and tourists barricaded a nearby highway in protest at the failure of local authorities to give warning about the release of water from the dam. 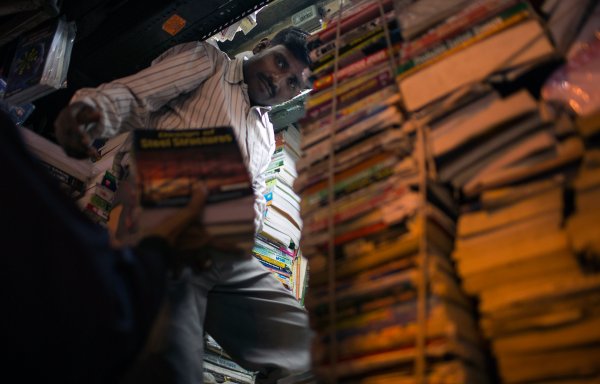 In India, Publishers Are Dumping Books Instead of Defending Them
Next Up: Editor's Pick