China's Appetite for Pangolin Is Threatening the Creature's Existence

Chinese paramilitary policemen inspect pangolins seized for destruction at a plant in Zhuhai city, in southern China's Guangdong province, in May 2014
Stringer—Imaginechina
By Alexandra Andersson

If anything dramatizes the plight of the pangolin — a small, scaly, insect-eating mammal found in Asia and Africa — it is the seizure, on May 13, of 956 carcasses in a van in China’s Guangdong province. The bust was among the biggest ever recorded in China, the world’s largest market for the creature.

Two weeks later, Hong Kong customs intercepted a shipment from South Africa, labeled “plastic pet,” that turned out to be 1,000 kg of pangolin scales — worth $645,000 on the black market. If you go by the same rule of thumb as Interpol, which figures that contraband seizures in general represent no more than 20% of actual volume, then the trade in pangolins is out of hand. With almost 23,400 smuggled pangolins intercepted from 2011 to 2013, the real figure must be in the hundreds of thousands — and that only includes reported seizures of dead or live pangolins, not their scales.

Demand for this nocturnal, ant-eating creature comes mostly from China, where its flesh is sought after as a delicacy and its scales — made from keratin, like human fingernails and hair — are used in traditional medicine, which are said to cure skin disease and asthma and promote lactation. There are eight pangolin species found in Asia and Africa and, much as with ivory and rhino horn, pangolin smuggling has increased in tandem with China’s expanding middle class and the country’s growing presence in Africa. A 2006 study found that as a result of China’s greater buying power, the pangolin population in Laos “crashed more than 90% in the last 10 years.” The following year, hunters in three Vietnamese nature reserves told researchers that “populations had massively declined in the last few decades, but particularly since about 1990 when the commercial trade in pangolins began to escalate.”

When Asian stocks of pangolin became scarce, traders looked to Africa for additional supply — in the way that they did when supplies of Asian rhino horn were curtailed. “Demand is now swinging toward Africa because air routes have opened up between the continents, and you’ve got more Asian workers on the ground here,” says Lisa Hywood, CEO and founder of the Tikki Hywood Trust, a Zimbabwe-based endangered-species-conservation organization. “We often find that ivory seizures have got pangolin scales and carcasses alongside — and it’s a lot easier to transport pangolin, so much of the time they go undetected.”

But the pangolin-poaching pandemic is nowhere near as publicized as the plight of elephants, rhinos and tigers. And this lack of notoriety is the shy and vulnerable creature’s real woe, since it results in inadequate legal support and lackluster enforcement.

Part of the problem is that it’s difficult to dramatize the decline of the pangolin without access to hard numbers. The animal is solitary and nocturnal, and its habitat is vast (in Asia, it ranges from China to Sri Lanka, in Africa from Ivory Coast to South Africa). But, since adult pangolins only have one offspring a year, it is plain that the species is being traded at unsustainable levels.

According to the International Union for Conservation of Nature (IUCN), which compiles the widely respected endangered-species Red List, there have been suspected population declines of 50% for the Asian pangolin subspecies over the past 15 years — meaning that they could easily be extinct in another 15. African subspecies, meanwhile, have undergone a decline in the region of 20% to 25% over the past 15 years, according to the IUCN. Little is being done to stop it.

“Africa’s population, police and magistrates are very aware that the world is pointing fingers at rhino and elephant poaching, but nobody is really — nationally or internationally — pointing fingers for pangolin smuggling,” says Hywood.

This is reflected at an international level, with the Convention on International Trade in Endangered Species of Wild Fauna and Flora (CITES) listing all pangolin species under Appendix II. This allows regulated trade of the endangered animal, unlike Appendix I, which constitutes an outright ban. The legislation is complicated by the fact that the trade quota for the four Asian pangolin species is set to zero, effectively banning the trade, while no quotas have been set for African pangolins, leaving a gray area for smugglers to operate.

“The reality is that Appendix II leaves loopholes wide open for wildlife traffickers and legal exploitation. A CITES Appendix I classification, however, would close most of these,” says Rhishja Cota-Larson, executive director of Annamiticus, a U.S.-based organization working to stop the economic exploitation of endangered species.

Annamiticus and the Tikki Hywood Trust are among the groups hoping to push for an elevated protection status for pangolins at CITES 17th conference in South Africa in 2016. If they’re successful, there might still be time to preserve this charming, curious creature. But don’t bank on it. Chinese middle-class pockets, these days, are deep. 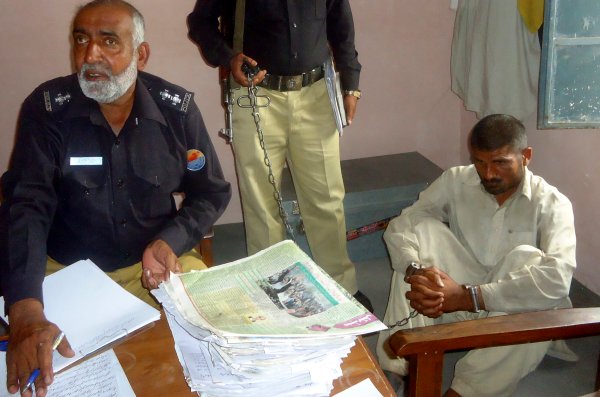 Cannibal Brothers in Pakistan Cooked 2-Year-Old in Curry
Next Up: Editor's Pick