In India, Publishers Are Dumping Books Instead of Defending Them

Bucking the global decline in revenues, the business of books in India is actually expanding — and at an exponential rate — buoyed by a massive English-speaking market and a growing, educated middle-class hungry for, and able to afford, written work of every genre and format.

But instead of becoming more open, publishing in India these days — or at least scholarly publishing — operates in an anxious climate. Beset by vexatious legal notices, mostly from hard-line Hindu organizations offended by the portrayal of Hinduism in academic works, more and more publishers are practicing a form of self-censorship by dumping titles from their catalogs rather than going to the expense of defending them in court. The situation is grave enough that authors and academics voice fears for the future of political debate in the country. Since January, more than half a dozen highly acclaimed books have been withdrawn or placed on hold. Many more withdrawals may be in the pipeline, insiders say.

“What is the point of printing heaps of books when freedom of speech is not respected?” asks British author William Dalrymple, whose 2009 work Nine Lives: in Search of the Sacred in Modern India was a masterful survey of Indians and religious thought.

The latest casualty is a book titled Communalism and Sexual Violence: Ahmedabad Since 1969 by Megha Kumar, a young scholar at Oxford. Worryingly, no suit has been filed against the book itself, which is a rigorous look at the role of rape during sectarian troubles in the largest city of Gujarat, newly elected Prime Minister Narendra Modi’s home state. Instead, its publisher, the academic press Orient Blackswan, withdrew it from the market because a legal notice it received, concerning a textbook published a decade ago, caused it to review the rest of its catalog, including Kumar’s book.

That notice, from Dinanath Batra, convener of the Hindu group Shiksha Bachao Andolan Samiti, claimed that the textbook From Plassey to Partition: A History of Modern India, by Sekhar Bandyopadhyay, had portrayed another Hindu-nationalist organization in a bad light. Fearing that Communalism and Sexual Violence would attract similar legal action if it remained on sale, and concerned that its staff might suffer violent reprisals, Orient Blackswan told Kumar that her book would be set aside.

“What is troubling is that the publisher was not served a notice against Dr. Kumar’s book. The publisher is withdrawing books as a precautionary measure,” Dalrymple says.

Shiksha Bachao Andolan Samiti is the same group that came to an out-of-court settlement with Penguin India in February to withdraw from sale University of Chicago professor Wendy Doniger’s book The Hindus: An Alternative History. Publisher Penguin pulped all copies of the book in India, sparking global outrage from free-speech activists. (In April, Aleph Book Co. agreed that it would not reprint another of Doniger’s books, On Hinduism, until Batra’s objections to it were entertained by an independent panel of scholars. The book is currently unavailable.)

Batra has been filing cases under Section 153A and Section 295A of the Indian Penal Code, which deal with hate speech. But the publishers have nothing to worry about, says Lawrence Liang of the Alternative Law Forum, who has studied issues around free speech for the past 15 years. “There is nothing that can go against a publisher who decides to take on a legal battle on free speech. Fought correctly, they are bound to win,” says Liang. However, “they are just not willing to fight a legal battle fearing the rising economic costs involved in it. They find it cheaper to withdraw books.”

Many blame Penguin India for having set a precedent by conceding to the demands of Shiksha Bachao Andolan Samiti a few months ago. “It was an extremely shortsighted decision by Penguin — they saved a few dollars for the company at the cost of a free society for all,” says Dalrymple.

After Penguin withdrew Doniger’s book, two other Penguin authors, Siddharth Varadarajan and Jyotirmaya Sharma, announced their decision to withdraw their books in protest. Varadarajan will instead self-publish his book on the 2002 Gujarat riots.

“Such a scenario raises questions of academic living and working in India,” says Kumar. “What does this mean for the future of fearless debates and critical thinking in the country?” 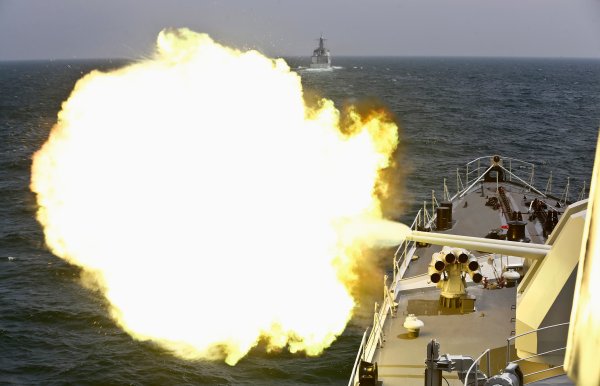 China to Attend U.S.-Hosted Naval Drill for First Time
Next Up: Editor's Pick