The Veterans Affairs Medical Center on May 8, 2014 in Phoenix, Arizona.
Christian Petersen—Getty Images
By Mark Thompson

Despite all the recent complaints about difficulty in getting medical appointments at the Department of Veterans Affairs, the facts show a soaring number of vets are taking advantage of its health care: While the total number of U.S. veterans has shrunk by 17% between 2001 and 2014, the number of vets enrolled in the VA health care system has jumped an amazing 78% over the same period.

The percentage of veterans enrolled in the system has more than doubled, from 20% to 42%, over the 13-year span. That plays a major part in the tripling of the VA’s annual budget, to $150 billion, since 2001.

The numbers, published in a Congressional Research Service fact sheet last week, illustrate two truths: Once you get past the challenges associated with getting into the system, it’s pretty good, and the escalating demand for the VA’s health care services no doubt has played a major role in the scandal that led VA Secretary Eric Shinseki to resign May 30.

The retired four-star Army general left, after more than five years on the job, following an internal probe that revealed there was “systemic” gaming of the VA scheduling system to mask lengthy delays in getting initial appointments.

The terse four-page CRS fact sheet, released by the Federation of American Scientists (CRS data isn’t generally made public), doesn’t offer any reason for the increase.

“The number of veterans is dropping because there simply aren’t as many veterans today as there were during the draft period,” says one former senior VA official who declined to be named amid the ongoing investigations into the agency’s problems. “As for more vets using VA health care, better outreach, the internet, and a bad economy have driven up enrollment numbers.”

Troops coming back from Afghanistan and Iraq are given more details about VA benefits than their fathers and grandfathers. “The Defense Department has been diligent in their educational programs for service members leaving active duty,” says Rebecca Townsend, a private mental-health counselor in Clarksville, Tenn., just outside the Army’s Fort Campbell. The city is also home to the second-biggest population of veterans in the country, trailing only Killeen, Texas, outside Fort Hood. “Every branch of service has a program for service members transitioning into civilian life, including extensive information regarding VA benefits.”

Those who served decades ago also are reaching out to the VA as they retire and face ailments common among older Americans. “We’re seeing veterans from prior wars entering the system for the first time, some because of the change in focus and interest by Americans over the last decade,” says Barbara Van Dahlen, a psychologist in Washington, D.C., and founder of the non-profit Give an Hour organization, which pairs military members needing mental health help with professionals who volunteer their time. “I’ve had Vietnam veterans tell me that they decided to get help because the country seems to be respectful toward, interested in, and concerned about those who serve.” 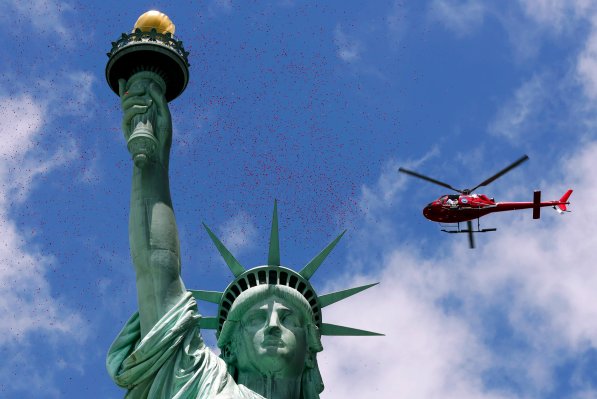 New York Drops 1 Million Rose Petals on Statue of Liberty For D-Day
Next Up: Editor's Pick