U.S. Sen. Ted Cruz promises delegates at the Texas GOP Convention in Fort Worth, Texas on June 6, 2014 to lead a conservative revolution unseen since the days of Ronald Reagan.
Rex C. Curry—AP
By Jay Newton-Small

Ted Cruz has not made himself a popular man in Washington. The Texas Republican would argue that’s the point. But even for a Senator — an elected office with the backing of an entire state — ticking off powerful people can have consequences.

In his first two years in Washington, Cruz has managed to help force a government shutdown, undermine the GOP’s chances of taking over the Senate and force uncomfortable votes for his fellow Republicans — not to mention the verbal bombs he lobs on a regular basis, many aimed at his own party. His colleagues, aware of the threats they face from primary challengers, have mostly held their tongues and their fire so far. But Cruz has already done some damage without much trying. A week after his election to the Senate in 2012, Cruz was named vice chair of the National Republican Senatorial Committee (NRSC), which works to elect Republicans to the Senate. But he subsequently refused to endorse incumbent Senators, or help them in their races, a fact that many Tea Party insurgents have seized upon. He hasn’t set foot in the NRSC in more than a year, sources say.

Cruz hasn’t campaigned or raised money for GOP challengers, but he has forced a series of uncomfortable votes — the most prominent one being a debt-ceiling bill in February — that put imperiled incumbents on the spot. “After already forcing a strategic blunder on the conference, he stood up, looked his Republican colleagues in their eyes and said he wouldn’t work against them in the primaries.” says Kyle Downey, a former GOP Senate leadership aide. “Then he broke his word. Breaking your word, or lying, has consequences in the Senate, both seen and unseen. When it comes to the currency of relationships, he’s running up big debts.”

Not that Cruz needs much help. He remains enormously popular with a small but vocal part of the base. That has given him a powerful grassroots-fundraising platform. Even though he’s not up for re-election for another four years, Cruz has raised $1.8 million so far this cycle, $1.5 million of it coming from individual donations. He’ll need this kind of support and much more if he decides to run for President in 2016. By all accounts, Cruz’s push to shut down the government did not play well with business and corporate donors. “He’s the last person Wall Street would give money to,” says a big Republican donor. “They’re more interested in a Chris Christie or Jeb Bush. Even Rand Paul would be a preferable alternative to Cruz. How [Cruz] is going to run for President without big donors is beyond me.”

Cruz’s office did not return a message seeking comment.

Not only are business groups not giving to Cruz, they aren’t giving to many of the outlets that helped elect him, like the Senate Conservatives Fund. “There’s been a push to consolidate the party behind the Establishment and stop the divisive freelancing that has twice cost us the Senate,” says another big GOP fundraiser, referring to the 2010 and 2012 cycles where Tea Party candidate losses prevented Republicans from gaining the Senate majority.

Turning off the big money taps is just one form of revenge. Another is committee assignments. There have not been any overt threats to strip Cruz of committee assignments, but if he refuses to vote for Mitch McConnell for leader next year, that could change. Cruz in February declined to commit to voting for McConnell for leader. “If Cruz votes against McConnell and decides he’s not going to be caucusing with Republicans, kicking him off all his committees is an obvious move,” Feehery says. “This is how [House Speaker John] Boehner is thinking about punishing those who vote against him speaker: no committee assignments and make sure that they get no money from” Republican campaign groups.

Indeed, former Senator Jim DeMint, a South Carolina bomb thrower who was Tea Party before the Tea Party existed, says he was pulled off of committee assignments for being too much of a troublemaker. “Yeah, there were some committee assignments that I was in line for that were put off,” DeMint says. “I was in line after 2010 for Finance Committee and I never got it … Certainly, there were a few cold shoulders here and there.” DeMint was also passed over for ranking member of the Commerce Committee.

But DeMint warns there’s a danger in ostracizing Cruz and his ilk. “As the leadership knows that can cut both ways, if the Republican leadership drives a wedge between outside conservative groups and the Establishment rather than try and bring them together, I think you’ll see grassroots fundraising dry up for the party,” says DeMint, who left the Senate in December 2012 to head the Heritage Foundation, the conservative think tank whose Heritage Action arm helps conservative candidates get elected. “You’ve seen that in the past.”

At home in Texas, Cruz has little to worry about, given the Tea Party’s dominance of Texas primaries. He’s much more secure than fellow Senate Tea Party Caucus member Mike Lee, a Utah Republican Senator who’s up for re-election in 2016 and is likely to be facing a tough primary at home. That said, Texas is a state with changing demographics. “If he’s not careful the changing demographics in Texas is going to make it harder for him to get re-elected,” Feehery says.

But what’s clear is that Cruz represents a wing of the party that is now losing ground, not gaining it. Unless Chris McDaniel, who is challenging six-term GOP Senator Thad Cochran, wins his primary runoff in Mississippi — by no means a guarantee — the Senate Tea Party Caucus will not gain any new members this cycle, which makes Cruz’s voice increasingly lonely.

“He’ll likely be a Jesse Helms, one of the lone conservative Senators who says outspoken and crazy things,” says a former GOP Senate leadership aide. “He’ll largely be marginalized.” Helms, who relished the title “Senator No,” was best known for his 16-day filibuster of a resolution declaring a public federal holiday for Martin Luther King Jr. “Like with Helms, there’ll be a certain amount of appeasement,” the Senate aide says. “But it’s like Star Wars: you don’t want to give in to the Dark Side.” 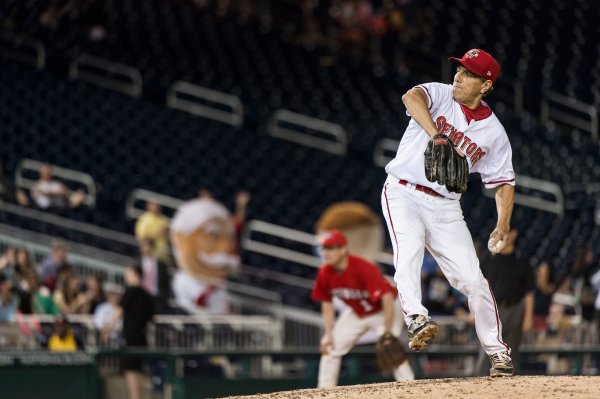 Inside the Crazy, Competitive World of Congressional Baseball
Next Up: Editor's Pick