Devils, wilderness, the genocide of all its original inhabitants and a rich soft cheese from the King Island Dairy: these are the things the Australian state of Tasmania is known for. World-class contemporary art? Not so much. The southernmost outpost of an already remote continent, its location alone would seem to preclude a spot on the culture circuit.

And yet, the Museum of Old and New Art (or MONA, as it likes to be called—with an emphasis on the moan) is gouging out a name as a cultural destination with as much resolve as the building is carved into the 250 million-year-old Triassic sandstone. MONA’s methods are unconventional and its tastes not exactly catholic, but as far as showmanship goes, it’s completely in step with the current art scene.

The irreverent tone is established early in a visitor’s tour. One parking spot is set aside for “God,” another for “God’s Mistress.” To get into the museum, which is mostly underground, visitors have to cross a tennis court (not an artwork—the museum’s owner plays there). Directly at the base of the entrance stairs is the bathroom, where users are treated, through mirrors, to what might be called a toilet-bowl’s-eye-view of their comfort stop.

Indeed, defecation is something of a motif. MONA is the current home of Chris Ofili’s The Holy Virgin Mary, a portrait of the Madonna made in part of elephant dung, which stirred up a huge ruckus in New York City in 1999, and Wim Delvoye’s Cloaca Professional, a room-size glass-and-tube apparatus that is “fed” twice a day, processes the food through its various chambers, then deposits the result into a waiting receptacle.

Behind the playfulness is a well-hidden thoughtfulness. Wall plaques have been abolished and visitors navigate the galleries by means of a smartphone-like device known as the O. Using geolocation technology, the O displays information about what visitors are viewing with the press of a button. The O also records which pieces visitors have looked at and can email them an account of their tour, so guests can find out more after they return home and the eyeball indigestion has worn off.

The device, and indeed the whole museum, sprang from the loins—or the mind, but you get the feeling his loins and mind are in close communion—of David Walsh, an awkward, squinty, vegetarian math geek and ping-pong enthusiast. Unlike art philanthropists of yore, he didn’t earn his considerable fortune. He won it computer gambling. “Unlike bricklaying or working in a restaurant or prostitution, gambling doesn’t produce any good for anyone,” he says. “It is incumbent on me to at least try to use the money in an interesting way because I didn’t get it in an interesting way.”

Walsh, 52, also says he didn’t set out to found a headline-grabbing museum. He was fascinated by history and noticed he could pick up ancient artifacts for a pittance. He accrued such a collection that he needed somewhere to house it. He bought a bankrupt winery; slowly, his ambition and desire to learn more about art grew. He acknowledges that the gallery is mostly about that learning process. “Public museums are repositories of received wisdom,” says Walsh. “They represent the value of assurance. MONA relieves you of the burden of feeling like an idiot because we make it clear that we don’t know what good art is either.”

One thing about being a total outsider—and being in Tasmania—is that you can try anything. Thanks to the O, Walsh knows which of his artworks are most popular. Sometimes, apparently just to give his middle finger a workout, he takes them out of circulation or moves them. He knows how long visitors spend in the toilet and the gift store. That treasure trove of data has museums like the Smithsonian inquiring about licensing his software.

Walsh’s gambling method is about exploiting asymmetrical risk. If you crunch the data from enough horse races, for example, patterns emerge: what horses do well in what conditions and with which jockeys. And if you amass all the millions of odds from races around the world, eventually you’ll find an instance where the risks do not match the potential rewards. Then you bet big. He says, only half jokingly, that he’d like to try curating by algorithm. “At some point I might write some software that looks at characteristics of works,” in choosing what pieces to exhibit, “like how much blue they have.”

In terms of asymmetrical risk, MONA would seem to slant the way Walsh and his financiers avoid. Can a collection of extremely idiosyncratic works draw people to a largely uninhabited island at the base of another largely uninhabited island? Hobart, Tasmania’s capital, is hardly Bilbao. Walsh and his partners have made the MONA experience as palatable as possible: the museum offers fancy accommodations, a ferry service from the city and a high-end restaurant on site. Last year, it took in $4 million—an impressive amount for a Tasmanian institution—but cost $12 million to run. It drew 343,147 visitors, a number that is not massively rising this year.

Walsh doesn’t seem worried. His life is long on long odds. He was conceived only after his mother, who had been infertile, nearly died from being accidentally treated with penicillin, a drug to which she was allergic. Growing up poor and asthmatic, Walsh counted ping-pong as one of the few sports he could play. At university, the other big table-tennis fan was Zeljko Ranogajec, now one of the world’s richest gamblers. He showed Walsh how to use his love of numbers and data to win games of chance. Handily, Hobart’s casino was not far from the math building. These are the foundational stories of Walsh’s life. He believes in chance, and he’s doubling down. 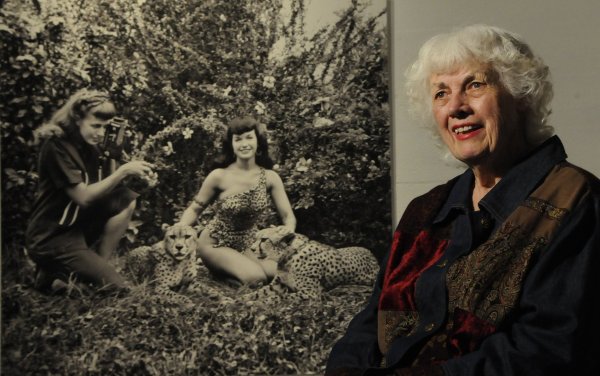 Bunny and Bettie: The Photographer Who Immortalized a '50s Sex Goddess
Next Up: Editor's Pick