A South Korean coast guard vessel carrying the body of a passenger, who was on the capsized ferry Sewol, which sank in the sea off Jindo, approaches to a pier at a port where family members of missing passengers gathered, in Jindo April 23, 2014.
© Issei Kato / Reuters&mdash;REUTERS
By Melissa Hellmann

A search team recovered another body from the submerged Sewol ferry in South Korea on Friday, raising the death toll to 290. The government’s disaster-response team said that military, coast guard and civilian divers discovered the body of the male victim on the third deck of the capsized ferry and are awaiting confirmation of his identity. Fourteen people remain missing.

The retrieved body is the second found this week after a lull in recoveries since May 21. On Thursday, a body was found floating 25 miles (40 km) away from the site of the sunken ship. In a statement, the government task force said it used fingerprints to identify the body as a passenger from the ship with the surname of Cho. The victim was traveling on the doomed vessel with his wife and two sons to Jeju Island. The bodies of Cho’s wife and 11-year-old son have already been recovered. His 7-year-old son survived.

The new finds come after South Korean prosecutors revealed that Yoo Byung-eun, the fugitive businessman linked to the ferry’s owning company, sought asylum at a foreign embassy in Seoul three days ago but was denied.

Prosecutor Kim Hoe-jong told Yonhap News Agency that an anonymous person calling on behalf of Yoo requested asylum. “The embassy rejected the request for asylum as [Yoo] is a criminal suspect,” he told the Yonhap News Agency. The name of the country that he attempted to seek asylum to has not been released.

Yoo has been missing since the sinking of the ferry on April 16. The Sewol was carrying mostly high school students when it capsized. 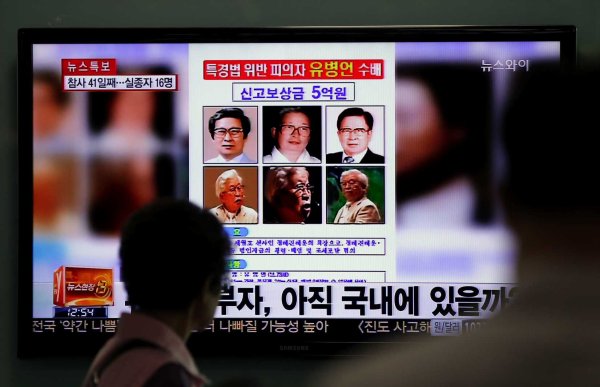 Daughter of Korean Ferry Patriarch Arrested
Next Up: Editor's Pick