The Obvious Question About Obvious Child: How Do You Make a Rom-Com With an Abortion?

Last month, following a Maryland Film Festival screening of the new movie Obvious Child (in theaters June 6), an audience member asked what many in the room were probably wondering: Considering the fact that the entire plot of this romantic comedy revolves around an abortion, was it hard to get the movie made? Who would fund such a controversy-magnet? Who would distribute it?

But writer-director Gillian Robespierre — who, due to the success of Child, her first feature film, was scheduled to have her last day at a desk job the following Tuesday — shrugged off the assumption that such a feat would be particularly difficult. In fact, as she told the audience that day, the abortion plot line was less of an obstacle than the abundance of fart jokes were.

The line drew laughs, but Obvious Child didn’t exactly have a quick path to the big screen.

It started in 2007, when movies like Knocked Up and Juno, as well as the Gloucester pregnancy pact, had put unplanned pregnancy in the public consciousness. Robespierre found movies like Knocked Up funny, but didn’t think they depicted a realistic version of what unplanned pregnancy would be like for a real young woman. She and her friends decided to make a short film in which the unplanned pregnancy would lead to a result that they thought real-life women they knew would choose. The movie wouldn’t be glib about abortion, but would treat it as a safe and legal procedure that happens in the world and can be taken seriously without seeming like a tragedy. “I didn’t want to see a movie where she was riddled with guilt. I don’t think we make light of that emotionality,” Robespierre told TIME just before that Baltimore screening. “It’s a heavy moment in a person’s life and it’s not like she’s super excited about this, but she knows from the beginning that she’s not in the right place, emotionally or intellectually. All of those reasons make it an easy choice for her.”

That 2009 short, which starred a then-unknown Jenny Slate, was positively received in the feminist blogosphere, which encouraged Robespierre to move forward with a feature-length version, which would also star the now-better-known Slate, who is profiled in this week’s issue of TIME. Elisabeth Holm, who produced the film, had no hesitations about the controversial content. “It’s just a very empathetic portrait of a complex human experience,” she tells TIME. “So to me it was kind of a no-brainer.”

Not everyone was sure it would work. “I think for the first couple of years of talking about this project to people there was this reaction of: ‘Interesting. We’ll see if you can pull that off,'” she recalls. But when Holm and the other executive producer on the film, David Kaplan, began a concerted effort to seek financing, they found it easier than they had expected given the hot-button topic. They quickly cobbled together money from three companies and from grants. For those who passed on the too-controversial proposition? “I guess if the topic scared people off, they weren’t the people we were meant to work with.”

Those who weren’t squeamish knew what they were getting into. Expanding from a short to a feature meant more time to address the subject of abortion head-on, and making the effort to take steps like working with Planned Parenthood to ensure accuracy; the healthcare organization vetted the script for a scene that involves a consultation with a nurse, to be sure the dialogue was realistic. Robespierre was even allowed to film at a clinic, an experience that ended up being Robespierre’s favorite part of making the movie, the part where it felt like “everyone clicked together.”

“We always say that it’s not an agenda-driven movie,” says Robespierre, “but it is.”

The finished product premiered at Sundance this year with the help of a successful Kickstarter campaign and was quickly snapped up by hip distributor A24 (the company behind films like Spring Breakers, The Bling Ring and Under the Skin) for a reported “low seven figures.” A24, no stranger to controversial films, may have seen an opportunity where others may have seen potential for scandal. Holm says: “They felt that [abortion] was for sure going to be a part of the conversation, and that was in part why they were excited to pick up the movie.”

Robespierre and Slate both say that reaction at festivals has been overwhelmingly positive — as has critical reaction — but exposing the movie to the world beyond feminist bloggers and film-festival attendees has, naturally, come with some negative feedback. Its creators and stars are prepared for that, but remain undaunted.

It helps that Obvious Child isn’t really a movie about abortion. It’s really about a life that gets messy, and the struggle to find confidence. To that end, the movie may just sound more controversial than it actually is. The film works hard to strike a balance between gravity and humor; Holm recalls that she and her colleagues decided in the ending room to keep a particularly uncomfortable joke toward the end of the movie in the film. “It is putting that toe over the line, and that’s an okay thing to do especially in moments of tension — we all just find relief in humor and laughing about these things. The film hopefully has enough heart and sincerity and humility that it earns those moments. But it was never our intention to just make something provocative for the sake of being provocative,” she says. “A24 felt that the film was really funny and sweet and relatable. Abortion was just one unique element.”

It was that realism and honesty — realistic characters, realistic friendships and, yes, a realistic look at the possible options a pregnant woman faces — that propelled the film from funding to filming to distribution. As Gaby Hoffmann, who plays the heroine’s best friend (and who recently made public her own real-life pregnancy), puts it, “Most of the women I know [have had an abortion] and it’s sort of despicable the way it’s been skirted around again and again and again and again, in culture, in media, where we have no problem showing gratuitous violence and sex — not that those two things are equal, because they’re not, but certainly plenty of sex scenes — and not the consequences of such. I didn’t give it a second thought at all. I think it’s so weird that it’s standing out as being a film that actually addresses abortion in a straightforward way. I can’t believe that that’s the case. It is, but it’s baffling to me.”

And standing out never hurts. So, back in Baltimore, Robespierre suggested a possible reason why it was easy to find financing: “It seemed,” she told the crowd, “like people were waiting for this story.”

Write to Eliana Dockterman at eliana.dockterman@time.com and Lily Rothman at lily.rothman@time.com. 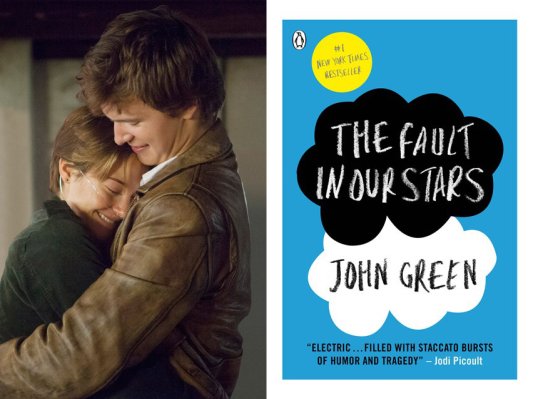 You'll Never Guess Which Country is the Most Obsessed With The Fault In Our Stars
Next Up: Editor's Pick