There’s a danger in calling a woman a “chick” in politics.

Braley released a 30-second television ad called “Peep,” in which footage of a baby chicken is shown. A narrator says that while Ernst is running as a fiscal conservative, she “had the chance to do something in Iowa, we didn’t hear a peep.” “In the state Senate,” he continues, “Ernst never sponsored a bill to cut pork. Never wrote one measure to slash spending.”

The response was immediate. “Imagine if a GOP candidate had used a “chick” in an ad against a female opponent,” tweeted Timothy Hagle, a political science professor at the University of Iowa.

The Democrats have latched on to every inopportune statement with a whiff of sexism uttered by GOP candidates this cycle as they try and turnout female voters. President Obama won women by 10 percentage points in 2012 and Democrats believe that if they can turn out women at similar levels, they will hold the Senate. Republicans have begun to fight back, highlighting unfortunate Democratic statements on women, like the Braley ad.

“Bruce Braley has shown time and time again just how tone deaf, elitist, and offensive he is,” said Brook Hougesen, a spokeswoman for the National Republican Campaign Committee, which works to elect Republicans to Congress,. “Bruce Braley is a deeply flawed candidate who fears Joni Ernst’s momentum, and should be embarrassed by this ad.”

Late Thursday, the Ernst campaign put out a statement saying Braley “degrades and insults Iowa women by comparing Joni Ernst to a ‘chick.'”

Braley campaign manager Sarah Benzing replied, “That we still haven’t heard a peep from state Sen. Ernst’s campaign on the substance of our ad shows just how clearly her record does not live up to the image she’s portraying on TV. The facts matter, and the truth is, state Sen. Ernst talks a lot about cutting pork, but her actions are something else entirely.” 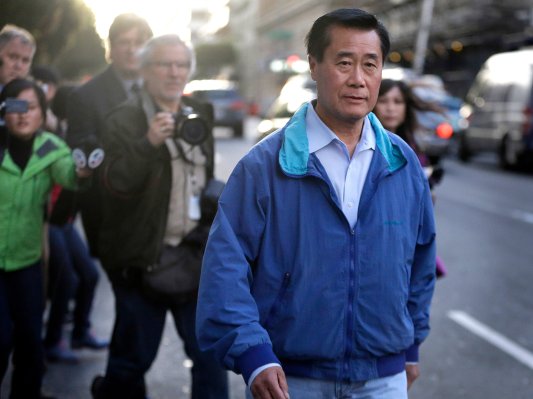 Senator Gets Thousands of Votes Despite Drop-Out
Next Up: Editor's Pick