Presenters in soldier dress pose for photographs during events by Thai military at Victory Monument in Bangkok on June 4, 2014
Piti A Sahakorn—LightRocket/Getty Images
By Charlie Campbell

After seizing power in a coup d’état on May 22, Thailand’s ruling military has faced street protests, the wrath of rights groups and international censure.

But now the generals have launched their own PR campaign to win the hearts and minds of their compatriots — using music, dancing and, well, pretty young women in skimpy military fatigues.

On Wednesday, a crowd of several thousand thronged Bangkok’s militaristic Victory Monument — which has actually been the hub of fervent anticoup protests over the past fortnight — for an evening of music and hawkish propaganda.

Attendees took pictures of the junta babes, grabbed selfies with full-dress commandos, petted horses in a straw-filled enclosure and were bombarded with shrill songs and army-recruitment videos played on a loop on two enormous screens.

The PR push comes in the wake of the Southeast Asian nation’s 12th military coup since the end of absolute monarchical rule in 1932. Army chief General Prayuth Chan-ocha seized power ostensibly to restore order after six months of street protests that claimed at least 28 lives and left more than 700 injured.

But in the face of mounting criticism, he has launched “Return Happiness to the Public” events, community trust-building exercises and regular media briefings to “clarify” the political situation and ensure a smooth 15 months until elections are next held. 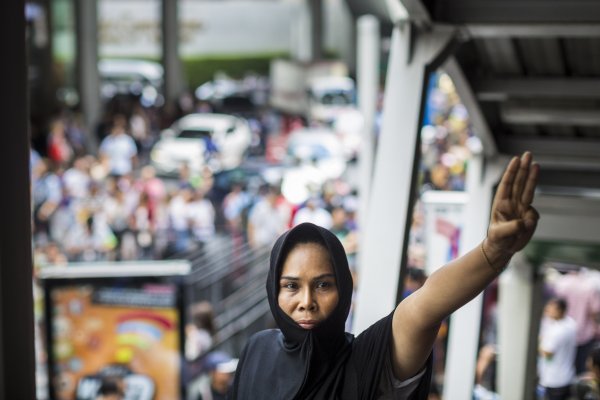