6 Things You Should Know About the Tiananmen Square Massacre

Twenty-five years ago Wednesday, Chinese troops violently retook the square in Beijing where pro-democracy protesters had set up camp for weeks. The Tiananmen Square massacre left an unknown number dead, with some estimates in the thousands, and smothered a democratic movement. But after a quarter-century—and a thorough attempt by the Chinese government to conceal the events that unfolded that June—our collective memory is sometimes limited to not much more than an image of a man defiantly standing in front of a tank.

So TIME went back in history to pull out the details, context and feelings of those grim days from our own unfolding coverage at the time, including a cover story from the June 12, 1989 issue. The articles give color, detail and context that are sometimes lost 25 years later. Here are five key facts that may have been buried in time:

It wasn’t the only protest

The demonstrations in Tiananmen Square, which at one point had reportedly ballooned to a million people, were not the only pro-democracy protests in the country at the time. Demonstrations had spread to hundreds of cities, including Shanghai, China’s largest, and in the days after the military mobilized in Beijing, protesters were putting up blockades in Shanghai.

And to be sure, it wasn’t the first time protesters had filled the Square in Beijing, a space for public protest. More than a decade earlier, in what became known as the Tiananmen Incident, a similar if smaller-scale crackdown on protesters spawned outrage and led to a reshuffling of the nation’s top leadership.

In a report on the “Tank Man” several years after the Tiananmen Square massacre, TIME described the Square as:

More than a quarter century after the massacre, the Chinese government’s extensive censorship apparatus—which employs two million online censors — still rigorously blocks information about the protest. The ban is so total that not only is the search term “Tiananmen Square” censored, but so too are related words and phrases. Authorities have even gone as far as blocking combinations of the numbers 6, 4, 1989 that might obliquely reference the date of the protest, June 4, 1989. So for many members of the world’s largest online population, the facts about the bloody crackdown have been erased.

Gorbachev entered through the back door

The protests presented an embarrassing pickle for the Chinese government during a visit from the Soviet Union’s Mikhail Gorbachev, the first visit from a leader of China’s communist peer in 30 years. The Chinese had scheduled a state banquet in the Great Hall of the People at the edge of the Square in May, as the protests raged. Gorbachev ended up having to go through the back door.

When the military opened fire, a lopsided battle ensued

In the early hours of June 4, 50 trucks and as many as 10,000 troops rumbled into the streets, TIME reported just days later. The military overwhelmed the civilians and began firing into crowds, but some protesters held fast, throwing rocks and Molotov cocktails. In some cases, they responded with deadly violence: Demonstrators reportedly beat two soldiers to death who had been seen killing a civilian. In another instance, protesters covered an armored personnel carrier in banners and then set the vehicle ablaze, trapping the crew of eight or nine soldiers. The military continued its onslaught and skirmishes lasted throughout the morning, “but by then the great, peaceful dream for democracy had become a horrible nightmare.” A doctor at the time said at least 500 were dead; a radio announcer said 1,000.

A goddess lived and died

A few days before the raid on the square, “in a flash of exuberance” as TIME wrote at the time, the protesters erected a “Goddess of Democracy” that partially resembled the Statue of Liberty. The 30-foot statue swiftly made from Styrofoam and plaster became a symbolic monument to the pro-democracy movement, and was intended to be large enough to be difficult or at least embarrassing for authorities to take down. Tanks crushed her when troops took the square, TIME reported.

The Tank Man was and still is anonymous

“Almost certainly he was seen in his moment of self-transcendence by more people than ever laid eyes on Winston Churchill, Albert Einstein and James Joyce combined,” essayist Pico Iyer wrote in TIME about Tank Man, the nameless individual who was pictured stopping a column of tanks on June 5, a day after the massacre. The man was ultimately hustled to safety by fellow protesters and quite lost to the crowd. Only rumors of his identity persist, and when Chinese leader Jiang Zermin was asked a year later if he know what had happened to the young man, he responded: “I think never killed.”

Check out Iyer’s full piece on the “Unknown Rebel” here.

TIME‘s issue from June 12, 1989 features a cover from the massacre. You can read a free preview of the story, which is part of our archive open to subscribers, here. 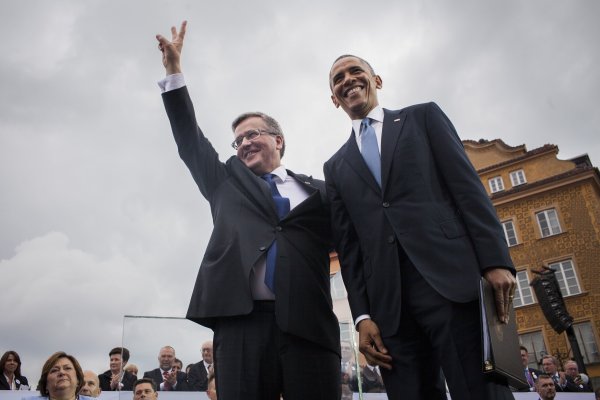 Obama Finds Fans of American Leadership in Poland
Next Up: Editor's Pick