Late one night in 2002, Marin Soljačić was awakened by a beeping on his cell phone. A fellow at MIT’s Physics Department at the time, Soljačić’s primordial brick phone had the annoying habit of beeping loudly and incessantly when it needed to be plugged in to charge, and once it started, it couldn’t be turned off. He stumbled into his kitchen to plug it in.

That’s when he had his eureka moment. Why not get rid of wired charging altogether?

“Why can’t this thing take care of its own charging?” Soljačić thought. “The phone was always a few feet away from a source of electricity, but somehow that was just too far for it to bridge the gap.”

Soljačić got to work inventing a revolutionary new form of wireless power. After some fits and starts, he tells TIME, he’d developed a prototype, and in 2007, he co-founded a company called WiTricity that is now bringing an ambient electric charge to homes, cars, offices and devices. The technology is here, and already being used.

At its most basic, WiTricity’s technology consists of two copper coils coupled by magnetic waves. One of the coils is attached to a power source, creating a magnetic field, while the second coil is primed to convert that magnetic field into an electric current. The coils can transmit and receive magnetic waves as far apart as about eight feet, and go through solid objects like desks, barriers and human bodies.

The powered coil can transmit energy to multiple receiving coils, meaning that just one source can send a charge to multiple objects. And the technology can overcome its eight-foot range with what WiTricity CEO Alex Gruzen calls a “daisy chain,” a series of repeaters that transmit energy along a series of coils. The idea is that your phone could charge when you simply enter a room.

WiTricity has entered the market at an auspicious time. The wireless power market is predicted to grow to $8.5 billion in 2018, according to analysts at IHS Technology, driven by wearable technology—think Jawbone Up and Google Glass, for instance—as well as mobile phones and tablet PCs.

“We will eventually live in a world where we’ll get access to charge whenever we want it in multiple environments in our everyday life,” says Ryan Sanderson, an analyst at IHS Technology. Now, “there’s a growing need for powering electronic devices.”

In practice, the uses of wireless power technology are wide. It’ll be normal for entire houses to be cordless within the next decade, experts say, each room a buzzing hotspot for invisible electrically charged objects. Wireless charges could emanate from floor mats, under desks, the ceiling and our beds. In the case of WiTricity’s technology, for instance, if a lamp is inlaid with a coil and placed within a few feet of a source coil, it can be powered wirelessly.

A smartphone case with a coil could begin charging your phone when you sit down at a table in a restaurant, for example, which would have a source coil under it. WiTricity has made multiple prototypes and is working with home furnishings companies to implement them.

Mainstream smartphones will eventually be factory-made to charge wirelessly at a distance. Samsung—the world’s largest smartphone maker by market share—is a member of the Alliance for Wireless Power (A4WP) industry group, which is seeking to standardize and implement longer-distance wireless electricity. WiTricity and Samsung both have executives on A4WP’s board of directors. Other major smartphone makers are already bringing wirelessly charged phones to market, including several of Google’s Nexus models, though because of their limited ranges, the phones still need to be snapped in place.

Future electric cars and plug-in hybrids will be automatically powered when they’re parked over a charging surface. Toyota’s next-generation Prius will use WiTricity’s technology to automatically charge cars that are parked over a pad-like device in your garage. A number of other high-profile auto suppliers, including TDK and General Motors spinoff Delphi, have taken licenses with WiTricity as well.

Soljačić, who is now a full professor at MIT, says he’s most excited by the medical applications of wireless charging. Patients with heart pumps—famous heart pump users have included former Vice President Dick Cheney—have electric leads extending through their skin to an electricity source. Heart pump maker Thoratec is a licensee of WiTricity’s technology in order to create heart pumps that charge automatically, eliminating a major source of infection in the skin.

“This partnership should allow Thoratec to better serve the patient population treated with ventricular assist devices, by reducing adverse events and dramatically improving quality of life for patients with advanced heart failure,” Gary Burbach, president and chief executive officer of Thoratec said in a statement at the time of the project’s announcement.

Wireless power could also make operations less cumbersome for soldiers in the U.S. military, who carry heavy battery loads and an unwieldy power cord from vest to helmet.

WiTricity says the technology is ready for the mass market, but one of the major barriers to implementing wireless power is agreeing on an industry standard. Many companies are hesitant to settle on a single technology if it could be obsolete in a few years. The technology is there—the question is how to implement it.

It’s an important question, considering how long it’s taken the company to bring a large number of products to market. Much of the finished technology has existed for years, but it hasn’t caught on.

But WiTricity only joined the A4WP this year, and electronics giants in a variety of industries including Canon, Dell, Sony and others are working full steam on developing a global wireless charging standard that can be broadly used across industries.

“We’re right on the cusp of broader commercialization, with some of these customers having committed timelines and schedules to taking products to market, and we’re still inventing,” says Gruzen. “It’s still relatively early days, but it’s real.” 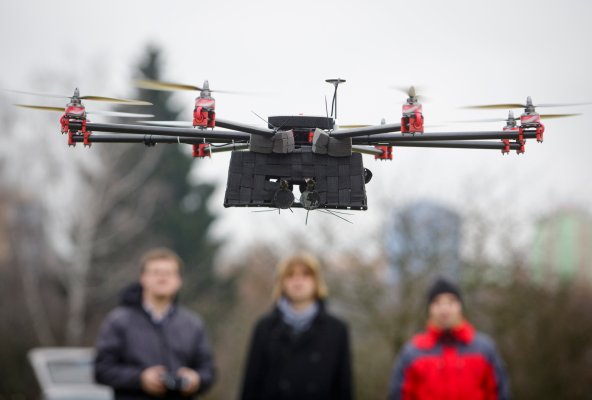 Feds Might Allow Drones For Filmmakers
Next Up: Editor's Pick