When we think and talk about learning, the metaphors we use matter. The language we employ when we describe how learning works can illuminate the process, allowing us to make accurate judgments and predictions—or it can lead us astray, setting up false expectations and giving us a misleading impression of what’s going on.

One of the most common analogies we apply to education is that of a staircase. As we learn, this model assumes, we steadily ascend in our knowledge and skills, leaving more elementary approaches behind. A child learning math, for example, will replace a simple strategy like counting on fingers with a more sophisticated strategy like retrieving math facts from memory. Under the long-lasting influence of psychologist Jean Piaget, staircase-like “stage theories” continue to dominate our mental images of how learning operates.

But in important ways, the staircase metaphor fails to capture the way cognitive change actually works. Research shows that children (and adults!) employ a variety of strategies to solve problems, not only the one “typical” of their stage of development. Around the time that learners begin to adopt a more advanced approach, they may return to earlier, more primitive approaches for a while.

This is not an orderly ascension up an ever-rising set of steps. It’s something more like waves on a beach, where one wave overtakes another and then pulls back, overtaken in turn by another advancing and then receding wave. “Overlapping waves” is, in fact, the name of a theory of intellectual development proposed by Robert Siegler, a professor of cognitive psychology at Carnegie Mellon University.

Here is Siegler writing about traditional notions of learning in his book Emerging Minds: “Children are depicted as thinking in a given way for an extended period of time (a tread on the staircase); then their thinking undergoes a sudden, vertical shift (a riser on the staircase); then they think in a different, higher way for another extended period of time (the next tread), and so on.”

And here is Siegler writing about another, more apt image: “Rather than development being seen as stepping up from Level 1 to Level 2 to Level 3, it is envisioned as a gradual ebbing and flowing of the frequencies of alternative ways of thinking, with new approaches being added and old ones being eliminated as well. To capture this perspective in a visual metaphor, think of a series of overlapping waves, with each wave corresponding to a different rule, strategy, theory, or way of thinking.”

Research by Siegler and others shows that the overlapping waves model applies to learners of all ages, in all manner of subjects. Its image of a series of surging and receding waves is not only a more accurate view of learning than the staircase image; it’s also a more humane and forgiving one. How many of us have felt distressed to see our children, or ourselves, “slipping back” into ways of thinking and acting we thought we had outgrown? What a difference it makes to see such episodes not as a failure to ascend to the next stage, but as part of the natural movement, the ebb and flow, of learning. “Slipping back” isn’t a shameful retreat from our goal—it’s part of the process of getting there. 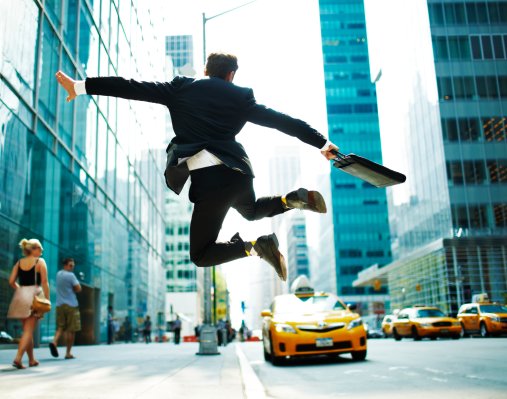 Love What You Do: 4 Things That Will Make You Happier at Work
Next Up: Editor's Pick