Boehner's Got a Catholic Problem on Immigration Reform

Three years ago Speaker of the House John Boehner received an honorary degree from the Catholic University of America, a prestigious religious institution that was founded and is still largely governed by the bishops of the United States. But the times have clearly changed.

Last week, the same bishops paid a visit to Capitol Hill to put more pressure on Speaker Boehner to pass comprehensive immigration reform this summer. This comes on the heels of a trip earlier this spring by the same bishops to the border town of Nogales, Arizona.

There Boston Cardinal Sean O’Malley said that the bishops came on behalf of the Church in the United States “to be a neighbor and to find a neighbor in each of the suffering people who risk their lives and at times lose their lives in the desert.” Following his homily, Cardinal O’Malley and his brother bishops made a poignant gesture by reaching across the border fence to distribute communion to Mexicans on the other side.

Last week’s Mass and Capitol Hill visits were led by Miami Archbishop Thomas Wenski. In his homily, Wenski had pointed words for lawmakers: “[o]ur immigration system is a stain on the soul of our nation. As a moral matter, it must be changed. We must pray that our elected officials recognize this and have the courage to reform it.”

Courage is exactly what the Speaker of the House needs right now. Nearly a year ago, the United States Senate passed a sweeping immigration reform bill. Boehner has said he won’t bring the bill to the House floor unless a majority of his Republican colleagues support it. But with nearly all Democrats supporting the bill, it’s clear that it would pass if it were brought to the floor for a vote. It’s widely known that Boehner personally supports immigration reform. In fact, earlier this year, he even went as far as to mock his fellow House Republicans who were afraid to take up the issues.

Make no mistake: Boehner’s opposition to the bill is purely political. He’s afraid that bringing up immigration reform will hurt his party in the fall elections and even hamper his own chances to be re-elected Speaker of the House. But recent polling suggests the former is unlikely.

If Speaker Boehner continues to balk on this crucial issue, he’ll face the uncomfortable reality of being in a public dispute with his Church. Educated by Jesuit and Marianist priests in Cincinnati, this is no small deal to the fifth Catholic elected United States Speaker of the House.

A national coalition of Catholic leaders calling on Speaker Boehner to act put it well: “[the current situation] is immoral and shameful. The eyes of our God — who hungers for justice and commands us to welcome the stranger and bind the wounds of those left by the side of the road — are on us. …As Catholics who share your commitment to the sanctity of life in the womb, we must not be complicit in the suffering of migrants dying in the shadows.

Speaker Boehner now must decide between the social teaching of his faith and the political agenda of a fringe element of his party. He doesn’t face this decision alone, however. If he stands up against the Tea Party and for the Gospel on this critical issue, he’ll find a Church who is willing to walk with him the entire way. That’s a team worth being on: after all, it is faith—not politics—that saves us in the end. 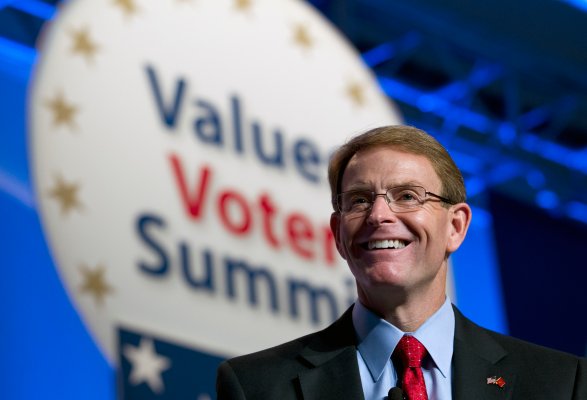 Pastors Prepare to Take Back America
Next Up: Editor's Pick