Joni Ernst is poised to become the Republican nominee to replace retiring Senator Tom Harkin in Iowa, if polls are right and she garners more than 35% of the vote in Tuesday’s primary, enough to avoid the race going to a state convention. If she goes on to defeat Democrat Rep. Bruce Braley in the general election—by no means a guarantee—she’d be the first woman elected to Congress from the Hawkeye State.

Ernst, a state senator, is one of eight strong female senatorial candidates vying for open seats or taking on challengers this cycle, upping the odds the Senate expands its female representation. Not all will get through, but chances are the Senate could see as many as five more women next year, bringing the total to a record 25 female senators. A striking number of Republican women have good shots: if all four win, it would double the number of GOP women in the Senate. Indeed, Republican female senatorial candidates are succeeding where House candidates are falling behind— recruiting less than one third the number of women they did last cycle.

Until six weeks ago, Ernst was trailing in polls and considered the underdog to businessman Mark Jacobs. So, what did Ernst do right? Perhaps unknowingly, she followed the advice of the Barbara Lee Family Foundation, which advances women’s equality and representation in American politics.

In a new study out Monday called “Keys to Elected Office, The Essential Guide for Women,” the non-partisan group found that one way women can turn their sex into an advantage is by expanding the playing field. Until a few years ago women who, say, started a small business like a bakery might have downplayed that experience as too feminine or trivial. But, the study found, women lost when they competed on a narrow field of classic male professional resumes. “We found that it was an advantage when women used all their life’s experiences to run for office,” said Mary Hughes, a political strategist involved in the study. “More, not less. They found you could be tough and policy minded and still talk about kids.”

Certainly, that has been the approach favored by Ernst, who on her website bills herself as “Mother. Soldier. Conservative for U.S. Senate.” Perhaps it’s a reflection on the universal disgust with politicians, but on her website Ernst highlights teaching Sunday school, raising kids and grandkids and serving in the National Guard more than she does her day job as an Iowa state senator.

The study also found that women had to prove strength and an ability to lead from the get go, whereas men could ease into a race. Ernst broke out of a crowded primary field with a catchy television spot in which she boasted in a barn of growing up “castrating pigs,” citing that as good experience for cutting “pork” and making Washington “squeal.”

And the study found that while missteps used to be fatal to female candidates, they are now more capable of rebounding, especially with help from third party surrogates. Ernst came under fire last week for calling the shooting death of seven people in California an “unfortunate accident” in a debate. But in recent weeks she’s won the endorsements of the Chamber of Commerce, former Republican presidential candidate Mitt Romney, Florida Senator Marco Rubio and the National Rifle Association, all of whom rushed to her defense.

And in “a year that you can’t get elected dog catcher unless you have an economic plan,” according to Celinda Lake, a Democratic pollster who worked on the study, Ernst has smartly focused her platform on economics and pragmatism.

Recent polling in the group’s 15-year history, Lake added, was promising in that it found that strength had taken over toughness as a desirable trait in a female candidate. “Strength is character and toughness is demonstrated through actions,” Lake said. “It’s been very hard for women to demonstrate toughness while still being likeable. It’s a lot easier to be strong and likeable.” Certainly, that’s the delicate balance Ernst has been striving, apparently with some success, to achieve. From the Des Moines Register’s endorsement: 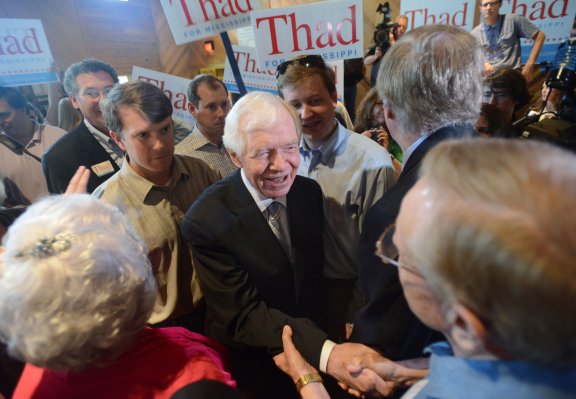