Not even a day after the Obama administration announced proposed new regulations to cut back on greenhouse gas emissions at power plants, Republicans had already planned a new offensive, using the new rules to hammer vulnerable Democrats in states across the country in a bid to retake the Senate.

On Tuesday, the National Republican Senatorial Committee is set to roll out robo-calls in energy-rich states Virginia, Louisiana, Colorado, and Alaska to target four incumbent Democrats in tight races for re-election.

Swing voters in those states will hear variations of this message: “Yesterday President Obama announced new costly environmental regulations. It’s all part of his radical energy plan, which he said would make electricity rates “skyrocket.” Even the U.S. Chamber of Commerce said that the new EPA regulations will increase electricity prices and kill thousands of jobs.”

The RNC released a web video Monday morning accusing Obama of continuing a “war on coal,” while Speaker of the House John Boehner called the plan “nuts.”

“Democrats like Mary Landrieu, Mark Begich, Kay Hagan, John Walsh, Jeanne Shaheen, Mark Pryor, Mark Udall, Bruce Braley, Gary Peters, Mark Warner, Alison Lundergan Grimes, Natalie Tennant all claim to be independent Democrats who stand up to President Obama yet it turns out they are completely ineffective and we will be reminding voters of that throughout the summer and fall,” said NRSC Press Secretary Brook Hougesen.

Democrats acknowledge that the new rules will make it more difficult to compete in a number of coal-country House districts, but argue their impact won’t be felt nearly as much in less parochial—and more consequential—Senate races.

Several of those Democrats are publicly breaking with the White House over the proposal, a move the White House expected. “While it is important to reduce carbon in the atmosphere, this should not be achieved by EPA regulations,” Landrieu said in a statement. “Congress should set the terms, goals and timeframe. Greater use of natural gas and stronger efficiency measures adopted by the industry have already helped us reduce carbon emissions to their lowest levels in 20 years, and this should continue. I will work with leaders of both parties to build on the progress we have already made.”

Others are trying to turn the issue around on Republicans: In Colorado, Sen. Mark Udall is firing back at Republican Rep. Cory Gardner’s attacks.

“The Pentagon says climate change is a threat to America¹s military infrastructure and global stability. Yet Congressman Gardner voted to ban the Department of Defense from taking crucial steps to protect our nation in a changing world,” said Udall spokesperson Chris Harris. “Droughts, wildfires, floods, heat waves and storms are driving up the price of groceries, hurting our economy and costing our state billions each year. Gardner’s stubborn refusal to acknowledge the facts of climate change is out-of-touch with mainstream Coloradans and will put our state at risk.”

Asked if the President was concerned at the adverse impact on Democrats seeking re-election, White House Press Secretary Jay Carney said the benefits would speak for themselves — eventually. “The President thinks this is the right thing to do,” he said. “And he’s confident that there will be significant benefits to our health, public health, and to our economy as the years pass.” 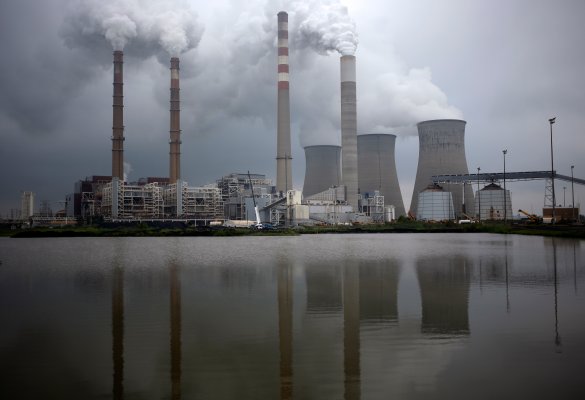