In mid-May, two upstate New York kindergartners playing in an inflatable bounce house were thrown into the sky and jettisoned from at least 15 feet in the air, one boy landing on a parked car and another on asphalt. “It was like a horror movie,” one witness told a local paper. “It just kept going up and up.” A similar incident occurred on Saturday, when a bounce house was picked up by strong gusts of wind and blown across a Colorado field with two children inside.

Despite what may seem like a new rash of freak accidents, children with bounce-house injuries have been regular customers in the nation’s emergency rooms for years—and they’re only getting more frequent. Safety experts have been arguing for years that tougher safety guidelines need to be in place.

In 2012, a team led by the Center for Injury Research and Policy published the first comprehensive study of such injuries in the journal Pediatrics. The researchers found that there was a 15-fold increase in such injuries from 1995 to 2010, when 31 children per day on average were seen in emergency departments for “an inflatable bouncer-related injury.” On average, they found that the patient was about seven years old, and most commonly sustained some kind of fracture or sprain to a leg or an arm. Almost 20% of the cases involved head and neck injuries. Kids usually got hurt while falling inside the bouncer—rather than out of it—often into another kid of a different size.

The New York case appears to be uncommonly serious: According to recent reports, one boy remains hospitalized for injuries related to what police are calling a “tragic accident” that occurred on May 12. The 2012 report found that only 3.4% of the inflatable-injury cases involved being hospitalized.

Part of the reason injuries are increasing appears to be a simple one: Bouncy houses and moonwalks and inflatable obstacle courses are not only more popular than they were two decades ago but also come in do-it-yourself-packages that parents can purchase and set up themselves. “You can buy them on the shelf at Costco,” says Tracy Mehan, a health educator with the Child Injury Prevention Alliance.

Drew Tewksbury, a senior vice president at insurance broker Britton Gallagher, developed an insurance program for amusement rentals like bounce houses. He says that trying to set up such playthings without professional operators and attendants is a “recipe for disaster.” He also says that the question of liability is always determined on a case-by-case basis, depending on where the bouncy house is, who set it up, whether waivers were signed and whether instructions were followed.

Currently there are voluntary guidelines for how to set up and operate a bounce house set out by ASTM International. Nearly 20 states, Tewksbury says, have passed legislation making those guidelines mandatory, rules that cover everything from the number of attendants one must have present to how deeply stakes must be pounded into the ground and how strong winds can be before all children are forced to get out.

In the absence of strict guidelines in most states, the Child Injury Prevention Alliance has set out some best practices, like limiting bouncing to kids ages six and older and, ideally, only allowing one child to bounce at a time. The 2012 report found that injury patterns for kids were similar to those gotten on backyard trampolines, and Mehan argues that Americans need to start viewing these fun-time devices with equal wariness.

“If this were a disease,” she says of the at least 11,000 annual injuries, “it would be considered an epidemic.” 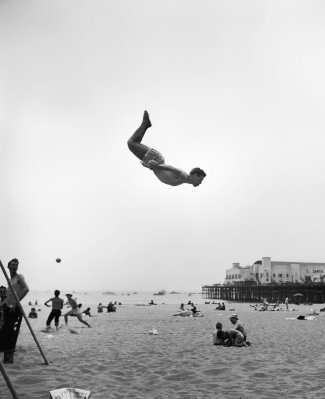 Learning to Fly: A Young Man Soars Above a Santa Monica Beach
Next Up: Editor's Pick