How Hollywood Can Get More Women to See Movies

Traditionally summer blockbusters are created for, marketed to and star men. And most major movies this summer fit that mold, including Godzilla, The Amazing Spider-Man 2 and X-Men: Days of Future Past.

But Maleficent, a film starring a woman — and an evil woman at that — cast a spell on audiences with a $70 million opening weekend, hitting the high end of its prerelease expectations. Why is the Disney film doing so well? The answer is women: 60% of the movie’s over-25 audience was female. Which means the other 51% of the population does matter when it comes to creating a box-office hit.

Earlier this year, an analysis by Vocativ found that movies with strong female roles make more money. This means movies that pass the Bechdel test — a simple evaluation that questions whether two women spoke to each other in the movie about something other than a man — score higher numbers at the domestic box office. And yet, 2013 was a dismal year for women in film: of the top 100 grossing films in 2013, women made up only 15% of the protagonists, 29% of the major characters and only 30% of all speaking characters, according to the Center for the Study of Women in Television and Film at San Diego State University.

That trend seems to slowly be changing. The Heat, Frozen and The Hunger Games were some of the industry’s biggest hits last year. This summer things look even better: Angelina Jolie, Emily Blunt, Shailene Woodley, Jennifer Lawrence, Cameron Diaz and Rose Byrne are all featured on the silver screen — along with a brood of male superheroes and a giant green lizard (who we’ll call genderless). Studios are finally catching on.

Unsurprisingly, movies with the most robust roles for women drew the highest percentage of females: The Other Woman’s audience was 75% female; Maleficent’s 60%; and Neighbors’ 53%. The first film stars three actresses (though their dialogue may be problematic), the second centers on superstar Angelina Jolie, and the third film actually lets Rose Byrne deliver almost as many jokes as co-stars Zac Efron and Seth Rogen.

(A word on the sneaky feminism of Neighbors: as he promotes the movie, screenwriter and star Seth Rogen has spoken about consciously subverting Hollywood’s gender stereotypes. “That actually became the most exciting idea of the movie to us,” Rogen told Studio360. “That we could portray a couple where the wife is just as fun-loving and irresponsible as the guy, and they get along really well. In a comedy that’s almost nonexistent.” Neighbors features a fantastic scene in which married couple Rogen and Byrne debate who gets to be the irresponsible one in the relationship. He says she has to be because she’s the woman and the woman is always the wet towel. She says that’s not fair and refuses to act as his babysitter. Keep writing dialogue like this, Rogen!)

Meanwhile, movies with less interesting parts for women didn’t pull as many ladies into theaters. X-Men: Days of Future Past counts Jennifer Lawrence, Halle Berry and Ellen Page among its stars, but Berry is given little to do except look worried and Page — whose character goes back in time in the comic books — spends the whole movie massaging Wolverine’s head while he takes her place as all-important time traveler. Lawrence gets plenty of screen time, but her character is a clear bid for young men’s tickets sales — the Oscar winner is covered in blue body paint for most of the film. So only 44% of X-Men‘s audience was female.

Godzilla and The Amazing Spider-Man 2, both of which offer pretty female flimsy roles, clock in at 42% female and 39% female, respectively. These movies still did well at the box office, but would more women have seen X-Men if Kitty Pride (Page) was the character going back in time? My guess is yes.

The theory will continue to be tested this week when two more movies with strong female protagonists — The Fault in Our Stars, starring Woodley, and Edge of Tomorrow, co-starring Blunt along with Tom Cruise — open in theaters.

The takeaway? Getting a lot of women to see your movie is not essential to its success. Superhero and monster movies will continue to draw big crowds: Spider-Man, X-Men and Godzilla all had at least $90 million opening weekends. But courting more women certainly doesn’t hurt. After all, females make up 51% of the population. 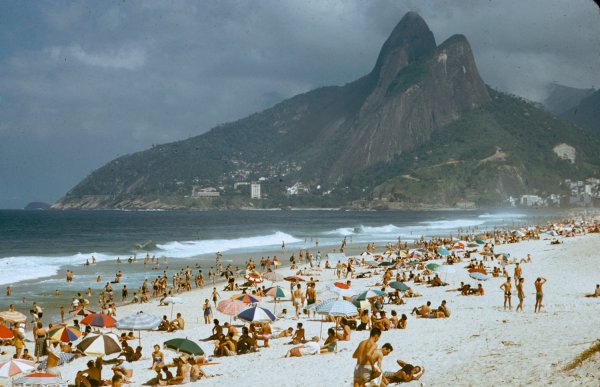 Brazil in the Fifties: Portrait of a Beautiful, Troubled Country
Next Up: Editor's Pick