U.S. President Barack Obama arrives to deliver the commencement address to the U.S. Military Academy at West Point's Class of 2014 on May 28, 2014, in West Point, N.Y.
Susan Walsh—AP
By Simon Shuster / Berlin

President Obama laid out his vision last week for a style of global leadership based not on military strength but on moral authority, economic muscle and, above all, the ability to build coalitions through diplomacy. His three-day trip to Europe this week will be his first chance to put that plan into practice. It won’t be easy.

For one thing, when Air Force One touches down in Warsaw on Tuesday morning, on the first stop of a tour of Poland, Belgium and France, Obama will find a Europe that did not exist even a few months ago. Its borders have been redrawn by the Russian invasion and annexation of Crimea, and the security demands that have emerged in Europe as a result are well beyond what the U.S. is likely to accommodate. Even the task of “reassuring allies,” as the White House has defined the goal of the trip, will run up against the massive and often incompatible assurances that the allies are expecting.

Poland will be a trial unto itself, as its government has been waiting not for moral leadership or diplomacy from the U.S. but a firm military commitment to its security. In April, as the reality of Russia’s invasion of Ukraine gripped Warsaw, its leaders asked the NATO alliance to deploy 10,000 troops on its territory. “Poland has been a member of NATO for 15 years now, and so far the only permanent military institution that we have is a conference center, training facility,” said Foreign Minister Radek Sikorski. “It is very important that all members should enjoy the same level of security.”

What Poland got in response was about two orders of magnitude less than what it asked for – about 150 airmen and some F-16 fighter jets deployed by the U.S. The first item on Obama’s agenda will be to inspect these jets and thank the pilots for their service, and he can only hope that his Polish counterpart, Bronislaw Komorowski, does not spoil the photo opportunity by pointing out the modest size of this force. But even if Komorowski bites his tongue, his famously undiplomatic predecessor, the Nobel laureate for peace Lech Walesa, will most likely pipe up. “The world is disorganized and the superpower is not taking the lead,” Walesa told the Associated Press a week before Obama’s visit. And if he makes good on his pledge to deliver that message to Obama in Warsaw, it may put a damper on their joint appearance at Poland’s Freedom Day celebrations on Wednesday.

That same morning, Obama is also due to meet in the Polish capital with Ukraine’s newly elected President, Petro Poroshenko, who will put similar strain on the limits of Obama’s reassurances. To counter the threat of further Russian aggression, Poroshenko’s government desperately seeks Western military assistance, and here Obama’s hands are tied. Kiev and Washington are not bound by any defense treaties, and the U.S. cannot risk wading into a proxy war with Russia by arming the Ukrainian military. As Bruce Jones, a senior fellow at the Washington-based Brookings Institute, recently put it: “Ukraine is not an ally. There are limits to the scale and nature of the U.S. commitment there.”

Then there are the limits on Obama’s ability to build consensus. On Tuesday afternoon, he will meet with the leaders of nine Eastern European states – namely Bulgaria, Croatia, the Czech Republic, Estonia, Hungary, Latvia, Lithuania, Romania and Slovakia – which have starkly different notions of how to respond to Russia’s belligerence. While the Baltic states have called for further sanctions against the Russian economy, Bulgaria’s government has tried to shield its allies in Moscow. In March, one of the senior lawmakers from Bulgaria’s ruling party, Mikhail Mirov, went so far as to send a letter congratulating the Russian parliament on the annexation of Crimea.

Even the U.S. goal of isolating Russia in punishment for its Crimean campaign will come up against an awkward snag while Obama is in Europe. In late March, the White House made some headway in this effort when it demanded Russia’s expulsion from the G8 club of wealthy nations. The other members went along eventually, and Russian President Vladimir Putin will be denied the right to host the G8 summit in his favorite resort town of Sochi this week. The slimmed-down G7 meeting in Brussels that will happen without Putin is a sign of American strength, Obama suggested last week. “Our ability to shape world opinion helped isolate Russia right away,” he said. But when he arrives in Paris on Thursday, Putin won’t be far away.

Right after the G7 forum gathers in Brussels to debate further sanctions against Russia that day, Obama and Putin will both be in Paris to dine with French President Francois Hollande. As the White House was careful to stress, this will not be a three-way dinner. “President Hollande may be dining more than once,” Ben Rhodes, Obama’s deputy national security adviser, told reporters when asked about this on Friday. But if Obama and Putin happen to run into each other in the washroom of the Elysee Palace on Thursday night, it may be hard to maintain that the U.S. has succeeded in isolating the Russian leader from his European allies.

In any case, the cameras will be sure to capture them together in Normandy on Friday, when Obama and Putin will be attending the 70th anniversary of the D-Day invasion along with several of their European counterparts. Rhodes, in his briefing on the visit, declined to say whether the two of them would be shaking hands. But given the solemnity of the occasion, the European leaders in attendance are unlikely to give Putin the cold shoulder. It will then be up to the photographers to capture which of them looks more isolated. 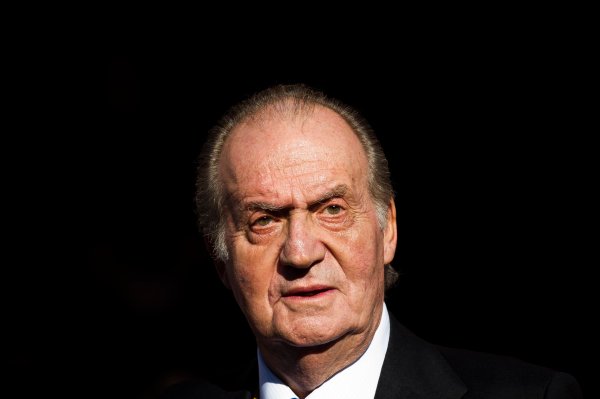 Spanish King Juan Carlos I to Abdicate Throne
Next Up: Editor's Pick