Crimeans Look to Putin and Russia After Referendum

Ivan Drobkov, an ethnic Russian native of Crimea, walks near the regional parliament with his 9-year-old son Bogdan on March 17, 2014.
Yuri Kozyrev—NOOR for TIME
By Simon Shuster

On the night of Feb. 26, Bogdan Drobkov, a third-grader in the region of Crimea, logged on to the Kremlin website and, with a bit of help from his father Ivan, composed a letter to Russian President Vladimir Putin. That afternoon, bloody clashes had broken out in his hometown of Simferopol, the capital of Crimea, between two groups of protesters supporting and opposing the new revolutionary government in Ukraine. Dozens of them were injured that day on the square outside the local parliament. Two were killed, while the rest of Crimea’s people got their first real taste of the violence of Ukraine’s revolution. “So I asked Putin to come and help us,” says Bogdan, who is 9.

He got a reply almost immediately, an automated response from the Kremlin Department of Written Appeals from Citizens and Organizations, saying his request would be processed in due haste. Bogdan printed it out and hung it up in his family’s apartment, a bit like a Christmas letter from the North Pole, and even though the Drobkovs could not have known it at the time, Putin’s forces had already begun deploying in Crimea on the pretext of protecting its people from the revolution. Less than three weeks later, the Russian occupation of the peninsula would lead to Sunday’s referendum, in which the residents of Crimea, under the watch of heavily armed Russian special forces, voted overwhelmingly to secede from Ukraine and become a part of Russia. On Monday, Putin recognized Crimea’s independence in an official Kremlin decree, clearing one more legal hurdle toward Russian annexation.

The central government in Kiev condemned all this as an illegal landgrab, as did its allies in the U.S. and Europe, which imposed sanctions on Monday to punish senior Russian officials for pushing Crimea to secede. The region’s ethnic minorities, primarily Ukrainians and Muslim Tatars, were equally appalled at what they saw as a plebiscite under the gun, and their community leaders urged both ethnic groups to boycott the vote. But the day that followed the referendum in Crimea belonged to the peninsula’s ethnic Russian majority. They wandered the streets, still dazed from the euphoria of the previous night’s celebrations, and soaked in the changes they felt, or imagined, sweeping over their peninsula jutting into the Black Sea.

Some of the changes were palpable. The Russian troops with their assault rifles and armored vehicles were nowhere to be seen around the streets of Crimea’s capital on Monday. The Cossack paramilitaries, who had come from Russia to aid the occupation, were for the most part gone as well. Only a few of their local Cossack comrades had been left to guard the headquarters of the separatist government, atop which the Russian tricolor now flies. “Everything is calm. That’s the big difference,” says Alexander Shuvalov, the commander of a local militia force as he watched his volunteers line up for their foot patrol on Monday afternoon. “The little green men are gone.”

That is what Crimeans had begun calling the Russian troops. For weeks, they have been easy to spot on the streets and highways by their green uniforms and assault rifles, but they have worn no identifying insignia throughout their time in Crimea, a ruse that has allowed Putin to deny that any illegal occupation was even taking place. In Perekop, the site of the de facto border between Crimea and Ukraine, even that pretense was dropped on Monday. The Russian marines guarding the checkpoint into mainland Ukraine were no longer hiding the fact that they were Russian marines. The patches on their shoulders identified them as troops of the Russian Black Sea naval fleet, which is housed in the Crimean city of Sevastopol. And although they wouldn’t say so openly, their presence suggested that Russia now sees this border as its own, with no more need for its officers to pose as “local self-defense brigades.”

Driving up to the checkpoint, the people of Crimea seemed to take their presence as par for the course, and even something of a comfort. Sedans full of women did not look at all perturbed when masked commandos opened their doors and leaned in with their Kalashnikovs. The ladies smiled and said hello, seemingly glad to have the soldiers inspect their trunk for weapons.

It was this sense of security that made Bogdan and his father feel safe enough to go for a walk around the center of town on Monday. For the past few weeks, the presence of “little green men” and Cossack irregulars made the city feel as though conflict was around the corner. The pro-Russian news broadcasts kept warning of “fascists” coming from Kiev to stage acts of sabotage in Crimea or fire into crowds. All of these warnings were part of the Kremlin’s propaganda ploys to justify its occupation of Crimea, but for the local Russians it hit a nerve. “The TV kept talking about a war,” says Bogdan’s father, a 40-year-old football coach. “My wife kept crying at night that there would be a war, and eventually I just had to shut off all the TVs in the house.”

At school, Bogdan felt the tension when he started bringing a Russian flag to school just after Putin’s forces invaded. The local Tatar and Ukrainian children, probably parroting their elders, took that as a sign of separatism, which the national television channels in Ukraine were denouncing day and night. “They called me a traitor,” he says. But as he walked around the Crimean parliament on Monday, he wore the Russian tricolor draped over his chest like a giant bib.

His childish expectations of what Russian annexation would bring seemed not much more mature than those of his elders. Ukraine’s language laws mandate all television programming to air in Ukrainian — or at least with Ukrainian subtitles — and textbooks in all the country’s schools are written in the official state language. But for the local Russians, many of whom hardly speak Ukrainian, that has been a headache lasting decades. Filling out forms and filing documents to the state often requires notarized translations for them. “And think about what that means for parents,” says Denis Zhuravovich, who was also taking a walk around the center on Monday with his son, 6-year-old Yegor, a first-grader. “He asks me for help with reading lessons, and I can’t even make sense of it,” says Zhuravovich. “And you know what the Ukrainians call Winnie the Pooh?” Pursing his lips, the father pronounced the Ukrainian word for bear — vedmid — with a look of sheer disgust at the sound of it.

After Russian annexation, he said, all of that would change in Crimea. The separatist parliament announced that it would switch the region to Moscow time, two hours ahead of Crimea, at the end of this month, and cafés in Simferopol were already accepting Russian rubles on Sunday. On a wall near the local parliament, a poster put up before the referendum made clear other benefits of Russian rule. Ukraine’s gasoline prices, the poster pointed out, are almost twice as high as they are in oil-rich Russia. The average wage in Russia is more than double, while doctors and teachers get paid roughly three times as much as they do in Ukraine. Throughout the day, locals walked up to stare at this poster and wonder at the possibilities, ignoring the graffiti someone had scrawled over the part comparing pensions — “Glory to Ukraine.”

Few of them realized that Russia’s economy, which is expected to grow at only 1% this year, could hardly handle the charity case that Crimea will become. Last week, Russia’s former Minister of Labor and Social Development Alexander Pochinok estimated that absorbing Crimea would cost the Russian government trillions of rubles — or at least a hundred billion dollars — especially when taking account of all the infrastructure that needs to be built to compensate for Crimea’s reliance on water and electricity from mainland Ukraine. “Let’s think about where we’ll have to tighten our belts,” the former minister suggested, “because we’re talking about colossal expenditures.”

This summer, the wave of Russian patriotism that has followed Crimea’s referendum will likely bring plenty of Russian tourists to the peninsula’s beach resorts on the Black Sea. But when those tourists realize how run-down Crimea’s hotels have grown since the region was part of the Soviet Union, will they come back the summer after that? Probably not. In the coming years, Crimea will need to come up with ways to pull its weight, because otherwise Russia’s many other depressed regions could start to feel a little jealous of the newcomer entering the fray for Kremlin subsidies.

This week, Russia will have to face all these potential drawbacks of annexation, and the Western sanctions, if they are forceful enough, may urge Moscow’s political elites to think twice. But having gone this far, it hardly seems likely that Putin will back away from his seizure of Crimea. That would mean changing course after one of the most brazen gambles of his career. Apart from that, Putin would have to disappoint roughly a million ethnic Russians in Crimea, including the little kid who believes Russia’s President came to his rescue this month, sort of like Santa Claus if he had an army of commandos with him at the North Pole instead of little green elves.

Most Popular on TIME
1
What the Freemasons Taught the World About Secrecy
2
My Husband and I Knew the Dangers of the Coronavirus. How Could We Still Put Our Neighbor at Risk?
3
Was The Wizard of Oz Cursed? The Truth Behind the Dark Stories About the Judy Garland Classic 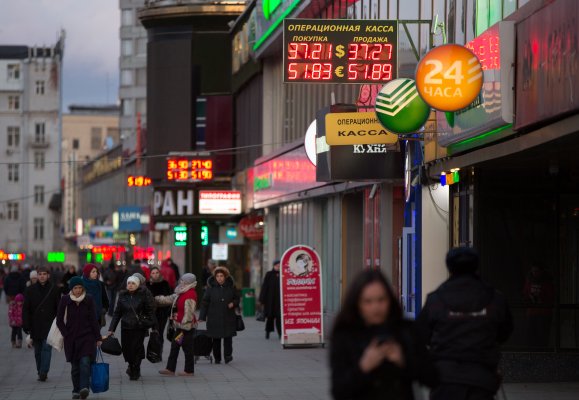