The new season of Orange is the New Black will be available on Netflix starting next weekend. I won’t be watching it. I lived it.

I was 17 and living in Columbus, Mississippi, in 1989. One night, I went to check on my beautiful 9-month-old son, Walter. He wasn’t breathing. I scooped him up and frantically rushed to the neighbor next door, who could not help me. I ran downstairs where another girl took my baby, started CPR, and advised me what to do. I performed CPR all the way to the hospital. The CPR left bruises on his chest. At the hospital, the doctors said they had done all they could.

The next morning, I went down to the police station as I had been asked to do. When I got there, a detective yelled at me, “You know you killed your baby. You stepped on him with your feet and smashed him on the floor. You killed him.”

I was alone with no lawyer or parent with me. I told him I tried to save my baby. He wrote down what I said and threw it in the garbage. He yelled at me for three hours. No matter what I said, he screamed over and over that I had killed my baby. I was terrified. I was put in jail and not allowed to attend Walter’s funeral.

When I was 18, I was convicted of murdering my baby and sentenced to death. As a death row prisoner, I was alone in my cell for 23 hours a day. It was a good thing: if the other women could have gotten near me, they would have killed me because they thought I deserved to die. In prison, you have to constantly watch your back.

Around the time my other son Danny was five years old, he asked me on the phone, “Are they going to kill you with a needle?” It is a question no child should ever have to ask his mother or father.

My own mother fought to prove my innocence. I was lucky: attorneys Rob McDuff and Clive Stafford Smith took my case pro bono. They got me a new trial and called witnesses who said I had been trying to resuscitate Walter with CPR. That’s where the bruises came from. My new attorneys also showed that my son died from a hereditary kidney condition. There was no murder at all.

I was 25 years old when I was finally found innocent. I am the only woman ever exonerated and freed from death row in the United States.

I wish I could say that it is rare for innocent people to be convicted and sentenced to death. But it’s not. Since 1973, 144 people have been exonerated and freed from death row in the U.S. I provide support to many of these men through my job at Witness to Innocence, a nonprofit organization that helps people who have been exonerated from death row and their loved ones.

A study published by the National Academy of Sciences found that more than 4% — one in every 25 — of the death sentences in the U.S. are imposed on people who are innocent. This should be a cause for outrage. If one in 25 bank transactions were inaccurate, no one would stand for it.

Recently, a group of former governors, judges and other important people got together and issued 39 recommendations to make the death penalty more fair and accurate. Even if every reform was adopted, innocent people would still get convicted and sent to death row. As long as human beings are in charge, they will make mistakes. If we can’t get the death penalty right every time, we shouldn’t do it at all.

You can change the laws, but you can’t change some things about human nature. There will always be people who want to advance their careers by putting people to death. Some of those people will be innocent, like me, and most of them will be poor, isolated and African American or Latino.

I was a teenager who, less than 24 hours before, had lost my precious baby boy. Ambitious men questioned, demoralized and intimidated me. In that state of mind, I signed the lies they wrote on a piece of paper. I signed my name in tiny letters in the margin to show some form of resistance to the power they had over me. People who say they would never sign a false confession have never been in my shoes.

When I first went to prison, I hated the people who railroaded me onto death row. Then I realized that I could be bitter and angry, but the only person it would hurt was me. I made a decision to fill my heart with love, try to be happy every day, and help other people. You can choose to be positive or you can choose to be negative. And that’s the choice that makes all the difference in the world.

Sabrina Butler is the Assistant Director of Membership and Training at Witness to Innocence. She still lives in Columbus, Mississippi, with her husband of 19 years and three children. 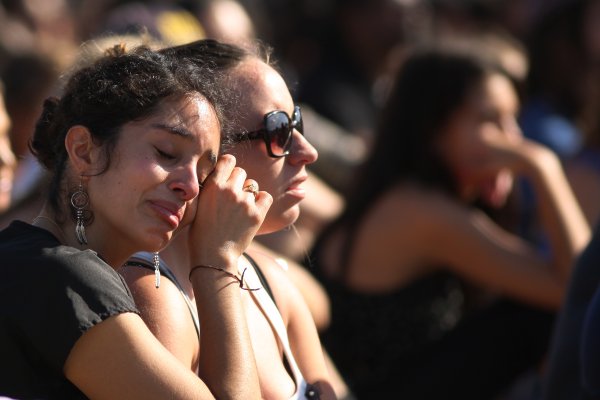 Sandy Hook Father on Gun Violence: 'It's Not Too Late to Protect Your Children'
Next Up: Editor's Pick