“A few minutes ago Secretary Shinseki offered his own resignation,” Obama said in a hastily called news conference at the White House after a meeting with Shinseki. “And with considerable regret, I accepted.”

Just moments earlier Obama had met with Shinseki and former Deputy White House Chief of Staff Rob Nabors, who has been detailed to the VA. They presented the President with their preliminary review of allegations of misconduct and mismanagement. Shinseki and the Obama Administration have been under fire amid revelations that officials manipulated waiting lists to hide the long delay veterans were facing before they could get care. Shortly before meeting with Obama, Shinseki began the process of firing officials at health care facilities in Phoenix that have come under the closest scrutiny.

“What they found that the misconduct has not been limited to a few VA facilities, but many across the country,” Obama said of the preliminary review.

Shinseki was under increasing pressure from elected officials in both parties to resign. Obama said he decided to accept Shinseki’s resignation because of “Rick’s judgment.”

“He believed he would be a distraction from the task at hand,” Obama said, lauding many of Shinseki’s efforts at the VA, while praising his career of military service. But Obama acknowledged that the distraction, at least in part, was political.

Sloan Gibson, the Deputy Secretary of Veterans Affairs, will be the acting secretary until the Senate confirms a replacement to Shinseki. Obama said he was still looking for a replacement.

“I regret that he has to resign under these circumstances, but I also have confidence in Sloan,” Obama said.

Republicans, who have been using the scandal to run ads against Democratic candidates in the midterm elections, sought to keep the focus on Obama.

“Personnel changes aren’t an answer to the problem for our veterans,” Republican National Committee chairman Reince Priebus wrote on Twitter. “It’s past time for Obama to step up & fix this mess.” 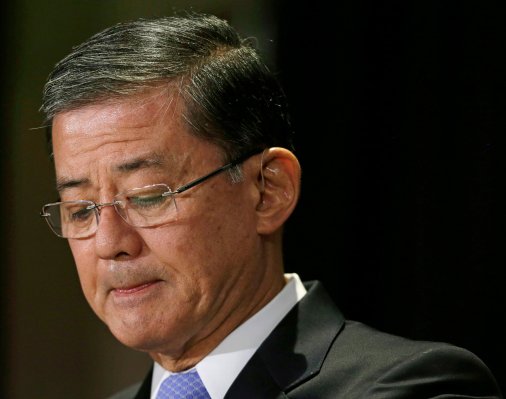 The Next VA Secretary
Next Up: Editor's Pick