Into the chaos of post-revolution Libya rides Gen. Khalifa Hifter, a former confidant of Muammar Gaddafi with a U.S. passport and a reputed history with the CIA. A resident of northern Virginia until the 2011 revolution that deposed his old boss, Hifter, 71, returned to his homeland and, after a couple of embarrassing personal setbacks, recently persuaded elements of the military forces to join him in battling the most extreme of the many armed militias operating in Libya today.

The fighting, described as the worst since the overthrow of Gaddafi, prompted the State Department this week to urge Americans to leave Libya, and the Pentagon to move a warship with 1,000 Marines on board into the vicinity. The USS Bataan was ordered, if not quite to the shores of Tripoli, then close enough to respond quickly if an evacuation is ordered.

Libya has remained conspicuously unstable since Gaddafi’s regime fell in August 2011 in an armed rebellion supported by a NATO air campaign. A constitutional process was set up, and a legislature and prime minister elected. But the government has failed to establish what academics call the fundamental element of sovereignty—a monopoly on force. Last October, the premier was kidnapped in broad daylight. Scores if not hundreds of militias are active, the most feared of which are Islamist extremists like the gunmen responsible for overrunning the U.S. diplomatic mission in Benghazi in September 2012, killing ambassador Chris Stevens and three other Americans.

Those are the militias Hifter is targeting. “We are now fighting not only on behalf of Libya, but on behalf of the whole world,” he told the New York Times by telephone on Wednesday. Fighter-jets loyal to Hifter bombed a base in Benghazi held by an extremist militia. In Tripoli, the capital, a militia loyal to Hifter overran the legislature on May 18, prompting lawmakers to finally name a date for new elections (June 25).

U.S. officials deny that Hifter is getting American support, something he reportedly boasted of receiving decades earlier when he commanded a force trying to unseat Gaddafi. He had helped Gaddafi come to power in a 1969 coup, but then turned against the strongman in the 1980s after being captured in neighboring Chad, which Gaddafi had ordered invaded. He later moved to Virginia, and voted in local elections in 2008 and 2009.

His 2011 return to Libya was not triumphant. Hifter tried but failed to take command of the rebel force arrayed against Gaddafi. And when he showed up on television in February calling for the overthrow of the government, he was mocked.

But in the weeks that followed, a force took shape behind him—motivated, according to the current U.S. ambassador, Deborah Jones, by a wave of assassinations carried by extremists, including a bomb attack on graduating military cadets. “That was the breaking point,” Jones said in a May 21 talk at The Stimson Center, a Washington think tank.

“Hifter’s focus is very specifically on terrorist groups,” Jones said, in remarks she acknowledged were more supportive of Hifter than the official State Department line, which criticizes the use of force. “It’s not necessarily for me to condemn his action going against… groups that are frankly are on our lists of terrorists,” Jones said.

Libya’s politics remain chaotic. The country has had three prime ministers in the last two months, two of whom still claim the title. The constitution is only now being drafted. Hifter has shown signs he views himself as Libya’s version of Abdul Fattah al-Sisi, the Egyptian general who deposed an elected Islamist government in neighboring Egypt, and was elected president this week. But the dynamic in Libya is a different one, analysts say.

“I hear a lot of support for his actions against these specific groups, less support for him as an individual, given his background,” Jones said. “The jury is still out, because it’s not clear what the political agenda is.” 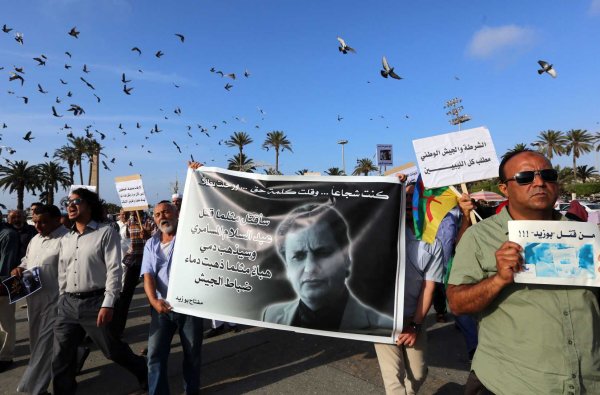