There Are Cat GIFs on Whitehouse.Gov Right Now

Healthcare.gov
By Olivia B. Waxman

As TIME reported earlier today, the White House is seizing on March Madness to market the Affordable Care Act to young Americans and remind them about the looming March 31 deadline to sign up for health insurance. And if you’re trying to explain anything to a young person in 2014, then you obviously have to use GIFs (animated images).

So the latest PSA on WhiteHouse.gov is a bracket in the form of a BuzzFeed-style “listicle” called “The 16 Sweetest Reasons to Get Covered.” Each argument for getting insured is illustrated by an appropriate GIF, whether it is an image of a cat, puppies chasing each other, a woman twerking on a bathroom sink, or First Lady Michelle Obama dancing with Jimmy Fallon, who is doing his best mom impersonation.

The White House has been amping up its use of GIFs to make its agenda accessible to young Americans since it launched a Tumblr in April 2013. In fact, its inaugural post endorsed the spelling of GIF with a “Hard ‘G'” — an “executive order” of sorts. Since then, its GIFs have featured the adorable first dog Bo, a list of the 13 best GIFs of 2013, and that moment when President Barack Obama and Vice President Joe Biden went on a run together. 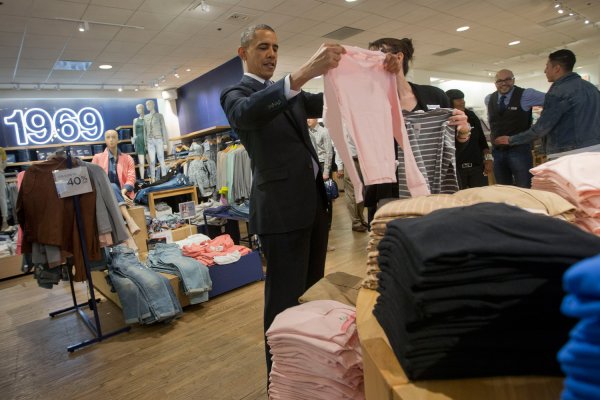 President Obama Thinks He Looks Great in Jeans, Thank You Very Much
Next Up: Editor's Pick