The night that the media sensation known as Fred Phelps became a national celebrity, few in his hometown of Topeka, Kan., were able to watch. Minutes before that July 1993 episode of the ABC newsmagazine “20/20” aired, as another reporter and I sat in the newsroom of the Topeka Capital-Journal waiting to see what Barbara Walters would do with him, a series of small, otherwise inconsequential tornadoes swept through and knocked out power to most of the city.

One might have thought that Phelps, who had at that point spent years largely unnoticed outside of Kansas for his “God Hates Fags” pickets on prominent Topeka street corners and the occasional gay pride event in Kansas City, would have taken the blackout that night as a sign of God’s displeasure. But Phelps was master of the long con, and he knew the best for him was yet to come.

As I learned as his target just weeks before his “20/20” star turn, Phelps — who passed away yesterday at the age of 84 — was probably the most preposterous, maniacal anti-gay activist in American history. After one of his many estranged children reported via Facebook in mid-March that Phelps, founder of a “church” made up almost entirely of his and a couple other families, was in a hospice center and near death, one last surge of renewed national attention visited him. If he was conscious, he surely enjoyed every bit of it.

The P.T. Barnum of homophobia and hate will be remembered as the guy who persuaded the Supreme Court to uphold his rights to picket at the funerals of fallen soldiers who died in Iraq and Afghanistan. Before that, he also picketed the funerals of countless people who died from AIDS, Bill Clinton’s mother, and murdered gay college student Matthew Shepard. Phelps occupied a place on the anti-gay fringe so extreme that even Jerry Falwell and Jesse Helms distanced themselves.

For those reasons and others, there will be obits and, inevitably, a Queerty listicle of Phelps’ greatest hits. The Internet already buzzes about celebrations to mark his passing which, of course, would thrill Fred. Jesus, he often noted, was hated in death, too.

What probably won’t be noticed was what a brilliant, prescient publicity monger he was and how he portended so much of the desperate look-at-me political culture.

At the time Phelps targeted me, he was weeks away from his “20/20” star turn, although I didn’t know that. I was a summer intern at the Topeka paper that year, freshly out of the closet at the age of 20 in an era when that was still a novelty and a serious risk to life and career. I accepted the reporting internship in Kansas, in fact, before I told my family I was gay — so that if they rejected me, I’d have a place far from my native Long Island to be that summer. (They didn’t.)

Phelps was known locally because he and his group conducted nearly daily picketing demonstrations at Gage Park, which was at the time rumored to be a gay cruising spot, as well as outside of a restaurant managed by an out lesbian. The city council had attempted to shut him up a few times, but Phelps and his daughter, both constitutional lawyers, won time and time again in court on First Amendment grounds. Those battles would presage his Supreme Court triumphs.

At first, coming from New York, I regarded Phelps as a weird quirk of Middle America. As I worked on a piece about gay youth in Topeka, however, I realized the toxic nature of Phelps’ wrath, the terror he spread. Every gay or gay-supportive person I spoke to mentioned their fears of becoming one of his targets.

Then, as they all predicted, I became one. After my piece ran, someone in the Phelps gang surreptitiously took a photo of me leaving the office. They drew horns, a tail and a long slithery tongue on it, declared me a “faggot who loves smoking the sausage,” among the more benign claims, and faxed this pre-Perez Hilton piece of art to the Topeka newspaper, the local TV stations, and various city and state government offices.

Had I planned to live there, the outlandish, extremely public nature of the incident could have crushed me. Instead, it made me laugh. Phelps sent such faxes constantly, making everyone from the governor to the editor of the Topeka Capital-Journal look like AIDS-spreading demons with voracious and illicit sexual appetites. Nobody, I thought, could possibly take this guy seriously.

But they did. ABC’s report on Phelps aired nationally, and suddenly he was a thing. He’d sit down with any reporter to spout off the vilest Biblical nonsense. Presumably, donations poured in from somewhere because all of a sudden, Phelps and his group were able to pop up in future years at gay pride events I attended in Chicago and San Diego, in Times Square on New Year’s Eve and even outside a Las Vegas high school student production of “The Laramie Project,” a play about Shepard’s death. Gay couples would make out in front of his pickets out of spite and more reasonable religious people would try to talk sense to his followers. Both were fuel to his fire.

Phelps was catnip to the media. He knew it and he loved it. And I know this because he told me so. In my final week in Kansas, I was sent to cover some local government meeting. Phelps was there for some reason; he had gotten his start, of course, as one of those local gadflies who show up regularly to rant during public comments segments of all manner of public boards and panels.

Knowing I was leaving town gave me the courage to introduce myself. He didn’t recognize my name or the fax he’d sent, such a busy bigot was he. But he was pleasant and gregarious, and he said nothing cruel or damning to me in person. That emboldened me to ask why he was so blunt and mean in his attacks. Wouldn’t he have a better chance of getting people to listen to him if he weren’t so harsh?

But, I asked, do you actually believe what you’re saying?

“Oh, yes,” he said. “As God is my witness, I do. This world is full of filthy sodomites and sinners such as yourself. It needs to be cleansed. People need to be warned. I am called to warn them. If I am hated, so be it. But I will be heard.”

Friess is an Ann Arbor, Mich.–based freelance writer and former senior writer covering technology for Politico, who teaches journalism at Michigan State University. The views expressed are solely his own. You can follow him on Twitter @stevefriess. 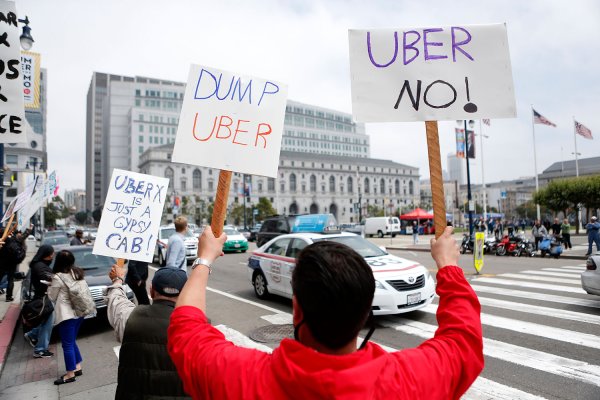 Uber, Tesla, Airbnb Are on Uncle Sam's Hit List
Next Up: Editor's Pick