No mother wants to drug her kids. Nobody lies around pensively stroking her pregnant belly and thinks, “Just can’t wait to medicate this little sucker.” But here’s the thing: unless we are going to radically alter the way we teach kids, there’s not much else parents can do to get some kids through school.

In his recent book ADHD Does Not Exist and his essay for TIME, Dr. Richard Saul suggests that attention-deficit disorders are massively overdiagnosed and a bunch of the symptoms occur in any busy human being. He warns that we are looking for a chemical solution to a problem that needs a therapeutic one. But this is a bit like saying that we already know how to prevent AIDS (simply stop having sex or sharing needles!), so we don’t need a vaccine or a cure. It’s not as easy as it sounds.

Everyone who defends giving kids stimulants has a story and here’s mine: I have a charming but mischievous son who skipped the part of elementary school where kids learn to read. Was read to as a child, bookish home, did first grade twice, had tutors, the whole nine yards. Still, when shown a picture of a hen with the word hen underneath, he’d read chicken. Maddening. He was diagnosed as dyslexic (another condition that “doesn’t exist,” according to some), and we sent him to a school that specializes in reading difficulties.

The school was great, but we got a lot of calls. There was a certain amount of our son being sent out of the room. This is in class sizes of no more than 12. Therapy, sleep, “finding a passion,” various flavors of carrot and stick were tried. No stone was left unturned. The subject of meds came up — nobody ever says it’s mandatory, it just comes up in conversation — but we held firm. We are not a pill-popping family. We don’t even take headache medication unless our vision gets blurry. We would push through, with discipline and love and grit. The teachers would just have to manage him better. After all, what would induce a parent to mess with the chemical balance of a growing child’s brain?

We may have stood our ground forever, except for the aforementioned “charming” part. Turns out our son was something of a pied piper. If he decided to wander off task, he took half the class with him. The nice folks at the nice school pointed out it wasn’t very fair to the other parents. It’s like that whole other childhood medication controversy, vaccination. Sometimes you don’t just do it for you. Maybe you can stomach your kid not learning, but it’s not cool if he takes the more vulnerable — and sometimes less able — kids with him.

But, in any case, what modern parent can approach the specter of a child who doesn’t learn with any equanimity? Even a not-very-attentive adult can see that the knowledge sector of the economy is the safest haven in downturns. The gap between those with college degrees and those without is ever widening. Not just in income, but also in life areas like successful marriages and health. The option for a kid who can’t sit and learn is not a slightly less lucrative career, it’s a much more miserable existence.

So here’s what would induce a parent to start messing with the chemistry of their growing kid’s brain: fear. As we saw our child fall behind, and we looked at what lay ahead, the cold hand of impending doom got us by the neck and squeezed. The older a person is, the harder it is to learn to read, we’re told. If a child can’t read, he can’t learn any other subject, including math. So the kid needs to be able to concentrate; he needs to be able to take tests; he needs to be able to hear what his teachers are saying. Either he needs a class size of about six, with an incredibly adept and captivating teacher, or he needs a little help.

We started giving him meds at age 11. Within two weeks, there was a marked change. That year, he learned to read — and write. I got my first comprehensible Mother’s Day card. (“Yeah, the teacher warned me that you would cry,” he said.) We swung wildly from feeling stricken about drugging him to feeling guilty we had waited so long.

Could we get our kid through school another way? Maybe. Perhaps spend half the day in P.E. Or get him a governess instead of a classroom. Or find a teaching style that is different, somehow, more kinesthetic or less visual or uses blocks or therapy monkeys. But they’re all just maybes and he’s not our only kid and he’s not our only life challenge and his useful school years are slipping away. The meds work, are almost free of side effects and, far from being handed out willy-nilly, are a huge pain to get every month.

When I asked our now 16-year-old son if he liked taking his meds, he said “Sure. They help me concentrate.” And when I followed up with, “Would you rather be able to concentrate without them?” he gave me one of those specially-reserved-for-moronic-parents-looks and replied, nice and slow, so I’d get it. “Wouldn’t anybody?”

Right. Wouldn’t any parent prefer to get their kids through school drug-free? Yep. (Well, mostly. As Dr. Saul suggests, it’s hard to believe the growth in ADHD prescriptions is completely organic. I’d love to hear from some parents on how their kid’s ADHD went unnoticed until they had to take the SATs.) But if we want to eradicate a chemical solution to what might be a behavioral disorder, we’ve got a whole economy and education system to reorganize. While you guys get on that, I’ve got to get my kid through school. 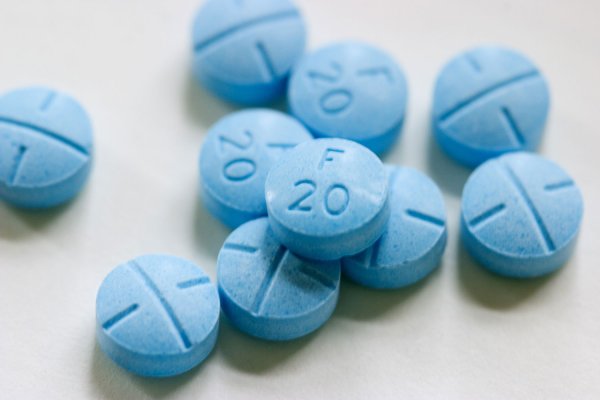 ADHD Does Not Exist
Next Up: Editor's Pick