President Barack Obama arrives to deliver a statement on Ukraine from the White House in Washington, March 17, 2014.
Evan Vucci—AP
By Zeke J Miller

Seven Russian officials and four Ukrainians are being targeted for sanctions, which will freeze any U.S.-based assets and prohibit Americans from doing business with them. Among those covered by the sanctions are two aides to Russian President Vladimir Putin, Crimean Prime Minister Sergey Aksyonov, and Crimean Parliament Speaker Vladimir Konstantinov.

“The are by far the most comprehensive sanctions that have been applied to Russia since the end of the Cold War,” a senior Obama administration official said Monday.

The sanctions come as Obama signed a new executive order broadening the Treasury Department’s sanctions authority to target Russian government officials and the Russian arms sector, as well as “Russian government cronies,” a senior administration official said. On Monday, the European Union imposed sanctions on 21 individuals, some of whom are also covered by the U.S. order.

“We’re making it clear that there are consequences for their actions,” Obama said in a brief statement from the White House Monday morning, adding, “We’ll continue to make clear to Russia that further provocations will achieve nothing except to further isolate Russia.”

The American government rejected the results of Sunday’s “so-called referendum,” arguing that any effort to redraw Ukraine’s borders without the involvement of the government in Kiev is illegal under international law. Obama has promised to impose “costs” for the vote as well as Russia’s takeover of Crimea and incursions into Eastern Ukraine. American officials alleged that there is some evidence that ballots in several Crimean cities were pre-marked in support of the separatist movement.

“We have fashioned these sanctions to impose costs on named individuals who wield influence in the Russian government and those responsible for the deteriorating situation in Ukraine,” the White House said in a statement.

But the sanctions announced Monday are largely symbolic, with those targeted unlikely to feel significant pain given they lack major asset holdings in the United States.

Still, on a conference call with reporters, senior administration official stressed the “market-imposed” costs of the ongoing crisis on the Russian economy. Russia’s main stock market has fallen more than 14 percent in the last month.  American officials pointed to the comments of Russian Deputy Economy Minister Sergei Belyakov Monday, reported by Reuters, saying the country’s economy “shows clear signs of a crisis.”

Additionally, a senior administration official said the new executive order provides the U.S. with a so-called “crony capacity” to target private individuals who back the Russian government, which would substantially pressure the Kremlin. “Going forward we have the ability to ramp up our pressure,” one American official said, adding that they can be deescalated if the Russian government reverses course.

The list of those hit by American sanctions Monday:

A Twitter account purported to be written by Dmitry Rogozin, one of the officials sanctioned on Monday, published a defiant reaction to Obama’s announcement: 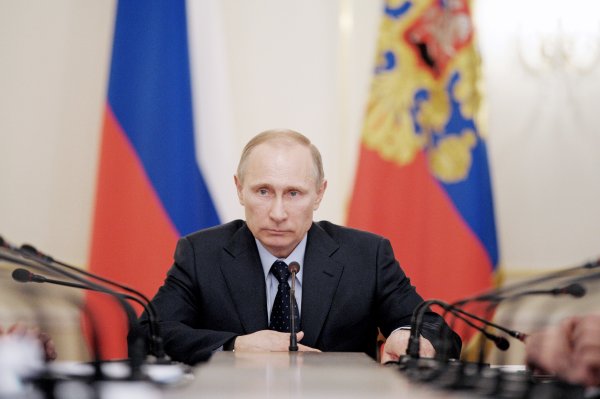 3 Big Questions Facing Putin and the West After Crimea Vote
Next Up: Editor's Pick