A jubilant crowd waits for the results of the referendum in the Crimean city of Sevastopol on March 16, 2014
Yuri Kozyrev—NOOR for TIME
By Sam Frizell

Voters in the Crimea region of Ukraine voted overwhelmingly on Sunday to secede from their country and join Russia, in a major victory for Moscow that followed days of international condemnation that the referendum itself was illegitimate.

The results of the vote in the predominantly ethnic Russian peninsula were not unexpected, coming several weeks after Kremlin-led forces took control of the region. But the crucial step toward official annexation by Russia will further raise tensions with Ukraine, as well as with the U.S. and Europe, which have promised an escalation of sanctions. An election official said 95% of voters supported joining Russia, with about half of ballots counted, the Associated Press reports.

The military threat Russia poses was palpable during the vote in Crimea, with Russian warships circling Crimea and Moscow-directed troops blockading Ukrainian troops in their bases. Russia said at the time of its initial intervention that it was protecting the majority ethnic Russian population against the new Ukrainian government in Kiev after the ouster of pro-Russian President Viktor Yanukovych.

U.S. President Obama and Russian President Vladimir Putin discussed the vote during a phone conversation Sunday. During that call, Obama “emphasized that Russia’s actions were in violation of Ukraine’s sovereignty and territorial integrity,” per a White House readout, and “that, in coordination with our European partners, [the U.S. is] prepared to impose additional costs on Russia for its actions.”

As voting was under way, Western leaders said it was being held in an atmosphere of intimidation after Russia had already violated Ukraine’s territorial sovereignty.

“The United States has steadfastly supported the independence, sovereignty, and territorial integrity of Ukraine since it declared its independence in 1991, and we reject the ‘referendum’ that took place today in the Crimean region of Ukraine,” White House press secretary Jay Carney said in a statement. “This referendum is contrary to Ukraine’s constitution, and the international community will not recognize the results of a poll administered under threats of violence and intimidation from a Russian military intervention that violates international law.

Top European officials said in a joint statement that “the referendum is illegal and illegitimate and its outcome will not be [recognized].”

And Ukrainian Prime Minister Arseniy Yatsenyuk called the vote “a circus performance,” the Associated Press reports. Many ethnic Ukrainians in Crimea said they were boycotting the vote.

U.S. Secretary of State John Kerry scrambled to reach an agreement with Russia that would ease tensions, and in a phone conversation with Russian Foreign Minister Sergei Lavrov, he condemned military activities outside Crimea where a natural gas facility was seized and called for Russian soldiers to be pulled back to their bases.

Russia now faces the increasingly likely prospect of greater sanctions from Western nations, which could have a significant impact on the nation’s economy. “As the United States and our allies have made clear,” Carney said, “military intervention and violation of international law will bring increasing costs for Russia — not only due to measures imposed by the United States and our allies but also as a direct result of Russia’s own destabilizing actions.” 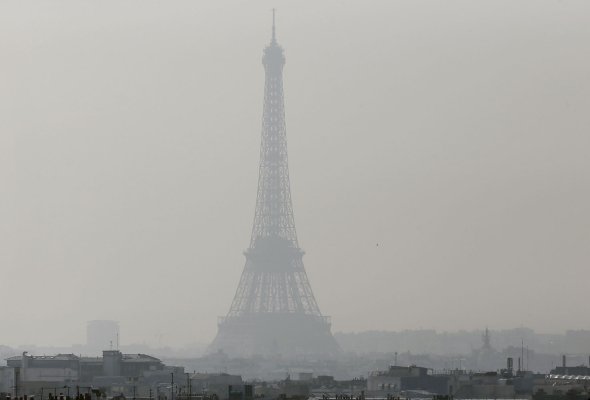 Paris Is Taking Cars Off the Road to Fight Smog
Next Up: Editor's Pick