Republicans Knock Obama on Russia, as Crimea Vote Gets Underway

Republicans fiercely criticized President Barack Obama’s handling of the crisis in Ukraine on Sunday, urging the White House to take a firm stand against Russia’s intervention just as the Crimea region of Ukraine was voting on a referendum to split from the country.

“Russia is a gas station masquerading as a country,” Sen. John McCain (R-Ariz.) said on CNN’s State of the Union, calling for “fundamental reassessment” of the U.S. relationship with Moscow.

“It’s kleptocracy, it’s corruption, it’s a nation that’s really only dependent upon oil and gas for their economy,” McCain said.

The comments came as voting was underway in Crimea, with the strongly ethnic-Russian peninsula voting on whether to secede from Ukraine and join Russia, despite repeated threats by the U.S. and the European Union that the vote will not be recognized as legitimate and that it will lead to further sanctions. Secretary of State John Kerry has warned Russia of consequences. But Republicans said Sunday that’s not enough, with some pointing to Kerry’s comments that the U.S. isn’t seeking to “threaten” President Vladimir Putin.

“Our administration is creating an air of permissiveness,” Sen. Bob Corker (R-Tenn.) said on Fox News Sunday. “We do need to show long-term resolve. The comment that Secretary Kerry made is not helpful and again it shows a wishy washiness.”

“No more reset buttons, no more ‘Tell Vladimir I’ll be more flexible.’ Treat him for what he is,” McCain said. “That does not mean the re-ignition of the Cold War. But it does mean treating him in the way that we understand an individual who believes in restoring the old Russian empire.”

White House senior adviser Dan Pfeiffer, appearing on NBC’s Meet the Press, reiterated the American position that the vote is not legitimate, and that sanctions would follow with the U.S. “supporting the new Ukrainian government in whatever way possible.”

“The United States is not going to recognize the results of that referendum,” Pfeiffer said. 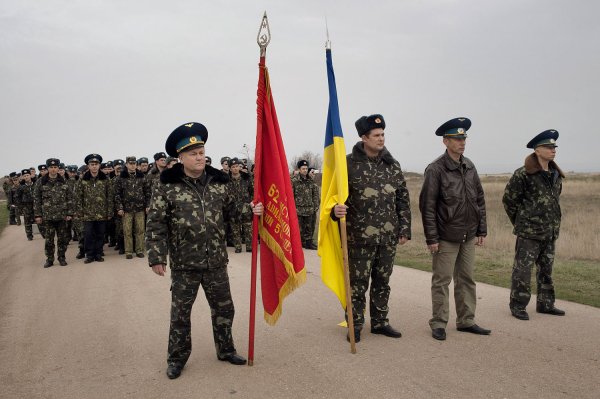