Li Na of China prepares to receive a serve from Dominika Cibulkova of Slovakia during their women's singles final match at the Australian Open 2014 tennis tournament in Melbourne Jan. 25, 2014
Petar Kujundzic / Reuters
By Hannah Beech

Does a bronze medal deserve a slap in the face? Apparently, that’s what a Chinese sports official thought tennis star Li Na deserved back in 2001, after she took a disappointing third place in mixed doubles at China’s national games. In a video of the medal ceremony that began making the social-media rounds on Jan. 29, Li, who last week captured her second Grand Slam title at the Australian Open, is shown leaning forward to accept the bronze medal. Then, the official who placed the medal around her neck, reaches out and quickly strikes Li, just 18 years old at the time, on her left cheek.

The blow does not look hard, and Li’s facial expression is shielded by her hat. But the tennis star reacts by touching her cheek with her own hand. Her mixed-doubles partner, who is standing next to her, looks on with an air of surprise.

Recruited as a badminton player when she was just five years old, Li is the product of a state-run sports system that drew inspiration from the Soviet model of constant training and enforced kowtowing to her home province (of Hubei) and her nation. Coaches, team leaders and sports officials commanded complete control. In its successful quest to turn itself into a sporting power, China allowed some of its child athletes to endure physical abuse, psychological stress and unfinished educations.

(MORE: China’s Tennis Champion Serves Up a Problem for Its Rulers)

Although Li excelled at racket sports — she was, without her consent, switched from the more popular sport of badminton to China’s nascent tennis program — she also chafed at the confines of a system that, as she describes in her memoir Playing Myself, considered “good results as 80% the coach’s work and doesn’t see the athlete’s personal hard work at all.” Only when she began to compete in international matches did Li realize that “in the west, the relationship between the coach and the athlete was one of service, and the athlete’s personal hard work is what is valued the most.”

The slap video was originally shown by China’s state-run broadcaster CCTV in July 2011, just after Li had won her first Grand Slam at the French Open. Notably, she won at Roland Garros only after she had escaped from the state sports system through a controversial program called “flying solo” that allowed her to pick her own coach, decide her own schedule and keep most of her own earnings. Li and her husband, Jiang Shan, a former tennis player who also once served as Li’s coach, are shown sitting in a CCTV studio while patriotic paeans to her are beamed nationally. The program is called “The Night of Li Na.” The host notes that Jiang was himself a tennis champion and footage plays of the 2001 mixed doubles medals ceremony at the national games. (For China’s provinces, the national games are crucial because the performance of provincial teams helps dictate the budgets they will receive from the central government.)

Jiang, a laidback fellow who goes by the English name of Dennis, is shown receiving the gold medal with his mixed-double partner. His then girlfriend, Li, gets the bronze. The video plays and the slap ensues. Yet the TV host appears not to see the blow that is broadcast on the giant screen onstage and he keeps on joking about Jiang’s earlier tennis prowess. “The Night of Li Na” rolls on merrily. (Jiang’s then partner was later quoted by the state-run China News Service saying that the official was actually trying to soothe a distraught Li by patting her face, but the motion does appear more aggressive than a gesture of consolation.)

The backstory as to how Jiang Shan ended up on the 2001 championship podium also hints at the stress Li endured when still yoked to the state sports machine. For four years, Li and Jiang played mixed doubles for the Hubei provincial team, and they were a highly successful pair. Yet as their romance bloomed, team officials made the abrupt decision to split the pair up. According to Li’s memoir, they did not know about the break-up until a match draw was published. Upset, Li negotiated with provincial sports officials, who promised that the two would be reunited at the upcoming 2001 national games. But when that tournament roster was published, the pair was still separated. Li was furious. “We are human beings,” she wrote in her autobiography, “not pieces on a chess board.”

The state-controlled press criticized Li for complaining about the mixed-doubles shake-up. One article sniffed that the Hubei provincial team had arranged the split to increase its chances of winning both gold and silver, “but Li Na has her own agenda, which is to stand on the champion’s platform with her boyfriend so they can memorialize their love.” Instead, Jiang and his partner won gold, while Li got a bronze and a slap. “Neither one of us got happiness [from the tournament],” she recalled. “Our hearts grew colder.”

The pair stayed together romantically, despite official prohibitions on state athletes dating each other — or dating at all. After the national games, “when my mood was very terrible,” Li engaged in a small act of rebellion. She got a tattoo of a heart and a rose on her chest. Tattoos, unsurprisingly, were not welcomed in China’s rigid state sports system. Li was again mocked by the Chinese press. But she didn’t care. “The tattoo made me move away from the unhappiness of the national games for a while,” she recalled in her memoir. Not long thereafter, beset by stress and health problems, she quit tennis altogether and went off to university with Jiang. “At last,” she wrote, “I made my decision that I would leave that place of sorrow.”

In 2004, Li did return to tennis. But she began to set her own terms and broke free of the state in 2008. She is now ranked No. 3 in the world. The 31-year-old’s sense of humor and dazzling smile have turned her into an international crowd favorite—the very antithesis of the Chinese sports automaton. Both at the 2011 French Open and at this year’s Australian Open, she praised her husband and others for their support but declined to thank China. Official media still took it upon themselves to congratulate the state’s cultivation of a tennis champion. After Li returned from Melbourne to her home city of Wuhan, Hubei provincial bigwigs ambushed her at the airport and presented her with an awards check for 800,000 yuan (or more than $130,000). She accepted the money with a grim face.

But even as the state still clings to Li, many of her fans rejoice in her ability to control her own fate and flourish. One Chinese columnist even saw in Li’s Grand Slam dominance proof that the state athletic factory has outlived its usefulness. The victory at the Australian Open, the columnist wrote, was “a slap in the face of the outdated sports system.” A slap, indeed.

—with reporting by Chengcheng Jiang 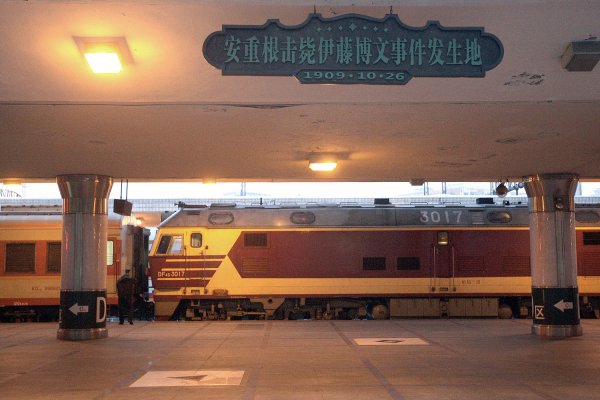 104 Years Later, a Chinese Train Station Platform is Still the Site of Anti-Japanese Rancor
Next Up: Editor's Pick